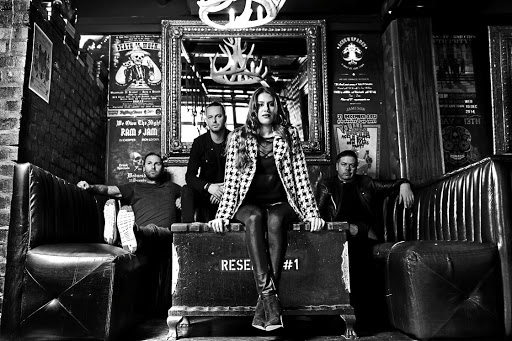 Yes, Natasha Meister is from Canada. And yes, she has an accent. But focusing on these peripherals takes away from the raw talent this guitar prodigy slash singer songwriter possesses.

Coming off the back of a successful solo music career, Meister, the offspring of a Swiss father and a South African mother has joined forces with Mike Vaughan and Gray Lowndes (The Rescu) to form The Sweet Resistance - TSR - a slick and polished alternative rock band from Cape Town.

My solo stuff was predominantly bluesy ... But with TSR I was keen to explore different genres in my song writing

Meister is keen on showing that TSR is its own project and that her solo career hasn't merely transitioned into a band; this is a new group with its own vibe and direction.

"I grew up singing in church. My solo stuff was predominantly bluesy and I still love the blues. But with TSR I was keen to explore different genres in my song writing," she says.

Although she is the band's principal songwriter, she says she brings her ideas to the group and they workshop them together.

"Tash is an incredibly gifted songwriter. Not only are her lyrics moving but her ear for melody is astounding," says guitarist Lowndes.

There is clearly merit in Lowndes' praise, as both singles from TSR's debut album, including the Sama-nominated Where There Is Hope (2016), shot to No 1 on 5FM's Top 30 charts and have enjoyed regular airtime across all major the country's radio stations.

The group is firmly set in the alternative-rock soundscape with melodic, anthem-like choruses and tiny sprinkles of synth pop.

LISTEN to The Sweet Resistance's track Not my Intention

Their songs are instantly agreeable - each track has well-crafted hooks that will make you wear out the "repeat" button on your stereo.

Though the members are seasoned veterans of the local music scene, they still exude the level of passion for their craft as if these were the first songs they had written and performed.

"Being able to speak about and perform music is what it's all about," says Meister.

After touring the country extensively promoting their debut album, the group is writing their highly-anticipated sophomore album.

"It's still early days, but we are enjoying the direction the new album is heading," she says.

• The Sweet Resistance will be performing at White Mountain Acoustic Music Festival in the Drakensberg from September 28 to October 1. Listen to their music on Soundcloud.