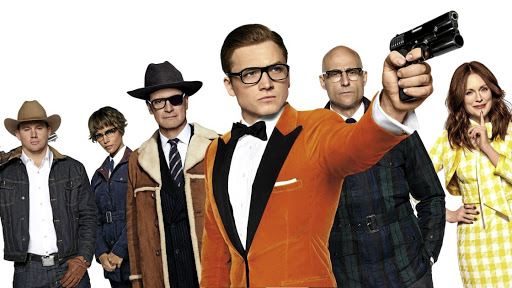 'Kingsman: The Golden Circle' is a spy comedy based on the comic book series 'Kingsman'.
Image: 20th Century Fox

Three years after the first Kingsman film sent up James Bond with its combination of ultra-violence, lurid jokes and physically impossible, overblown action sequences, director Matthew Vaughn returns to the world of the London tailor shop that fronts for the top-top-top secret organisation of British spies.

Our hero is still young Essex lad Eggsy (Taron Egerton) who in the wake of the apparent death of his mentor Harry Hart (Colin Firth) must keep the world safe from evil forces while maintaining his impeccably tailored silhouette.

When the Kingsman's headquarters and most of their agents are wiped out by the evil 1950s mom drug dealer Poppy (Julianne Moore), it's up to Eggsy and Kingsmen boffin Merlin (Mark Strong) to travel to the US and with the help of their American counterparts, the Statesmen, to save the world from Poppy.

To quote one of the dimmer characters in its attempted speedway robbery, Logan Lucky is a "vagrant fliolation" - namely of the "retirement" from ...
Lifestyle
4 years ago

Now I'd tell you exactly how Poppy, who lives in a high-security compound based on a 1950s-style US theme park in the jungles of South America, has decided to ruin the world, but it's too long, dull and overly complicated a précis to bother with.

Suffice to say that like its predecessor this film begins with a high-octane, over-the-top action sequence and continues to up the action ante of each sequence for a very unnecessary 141 minutes that, save for a few reasonably funny tongue-in-cheek cameo moments from Elton John, has little to recommend it as more than an excuse to keep fans of the original happy and set up the third instalment in a franchise we can live without.

Hopping around the world and using the introduction of the Statesmen to allow for some stereotypical turns by Channing Tatum, Jeff Bridges, Pedro Pascal and Halle Berry doesn't make any of it more interesting and Vaughn's signature slow-motion, intricately choreographed action jokes increase the boredom factor rather than relieving it.

WATCH the trailer for Kingsman: The Golden Circle

The first film at least pretended to be interested in its characters by giving them a little backstory and emotional growth, but here all of that is simply a way of filling in the time between set pieces.

It's an exhausting and disappointingly lazy attempt to cash in on the goodwill shown to the first film and it's hard to see how it's going to get any better from here on in.

Movie Review: Cruise's enjoyment of his 'American Made' role infectious

Yay, vintage Tom Cruise is back in an international crime escapade based on one of the US's biggest-ever covert operations
Lifestyle
4 years ago

Based on a graphic novel and directed by stuntman David Leitch (who shot some scenes for John Wick), Atomic Blonde provides a chance for "our ...
Lifestyle
4 years ago