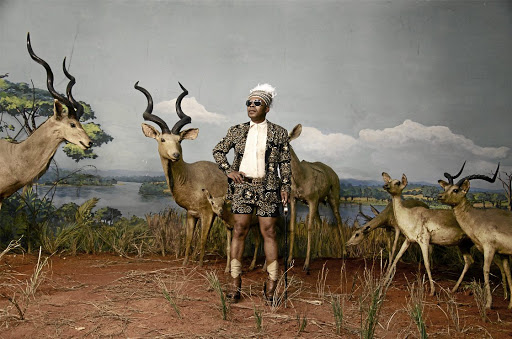 The Angolan-born artist has been named this year's Frieze Artist, the first African to receive this award. It means he gets an installation at London's most prestigious contemporary art fair, which opens on Thursday.

Among other themes the London work will feature Lenin and witchcraft.

''The way that Marxism-Leninism was indoctrinated during the revolution demanded strict loyalty and unquestionable belief, similar to religious practice," Kia Henda writes in his winning proposal.

Give it back: Africa’s treasures need to come home

This is a busy week for Kia Henda, who also has an exhibition opening at the Goodman Gallery in Cape Town on Saturday.

In the Days of a Dark Safari includes work in which the multidisciplinary artist looks at contrasting perceptions of Africa.

Kia Henda was raised in a family with strong political convictions in a country with a bloody and turbulent history. His parents were covert activists during the fight for independence against Portuguese rule.

Then 27 years of civil war followed.

''Those bloody conflicts became the epicentre of my research in my work.

''It's important to recognise the power of art to heal the wounds of the past, but also to make people aware of the existing threats."

In the Days of a Dark Safari explores both the colonialists' ''outside perspective", where Africa is something ''monstrous" and needing to be tamed, and the view from the inside that the continent is ''paradise lost" as a result of colonial invasion.

It's important to recognise the power of art to heal the wounds of the past, but also to make people aware of the existing threats

He elaborates. ''This is the discourse of those looking from the inside, claiming that the expulsion from paradise is the fault of those who came from the outside.

"They use the claim to their advantage and to hide the destruction by people who colonise themselves, pinning the blame for Africa's failures on an external phantom.

''One of the biggest damages that colonisation did to Africa was also to become a scapegoat for the problems that still ravage the continent," says Kia Henda.

''I'm conscious of how colonisation still plays an important part in the misery in many parts, but it's also very clear that it is a mask to cover corruption and mismanagement."

The Last Journey of the Dictator Mussunda N'zombo Before the Great Extinction series is inspired by Mobutu Sese Seko, that prototype for Africa's despots.

In Angola, José Eduardo dos Santos and his clan have had almost four decades to loot state coffers. Kia Henda denounces the recent arrest of activists for protesting the pitiful conditions most of the population have to endure.

''I firmly believe that the new generation in Angola, after having the same person in power for 38 years, will never again in their lifetime accept living under a dictatorship," he said.

• 'Kiluanji Kia Henda: In the Days of a Dark Safari' is on at the Goodman Gallery, Cape Town, from October 7 to October 28.