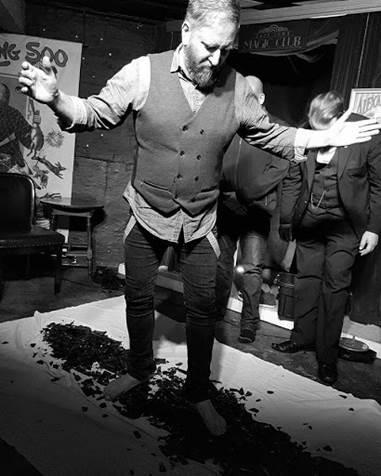 A Cape Town magician and illusionist will undertake his most daring performance yet when he attempts to set a Guinness World Record by walking 32km on broken glass.

And Russell Fox‚ 43‚ is aiming to do it barefoot on over 500 broken wine bottles in under 29 hours.

The attempt will take place on a special 25-metre-long track at the V&A Waterfront on Friday‚ which Fox will need to cross 1‚280 times in order to be successful.

The bottles will be replaced every two hours to ensure they remain jagged and sharp and are not crushed too finely by Fox’s weight.

“My biggest fear is losing concentration and getting fatigued which could lead to me passing out or falling over onto the glass‚” said Fox‚ who is also a mentalist and has previously only walked a distance of 5 metres on glass.

“I will look for ways to stay focused and I am calling on public support to drive me on.”

Fox said that his preparation for the marathon walk included “lots of mental preparation” as well as walking and jogging daily to stay fit and strengthen muscles and joints.

He also went on to a special diet in order to lose weight and spent a lot of time meditating.

The organisation is close to Fox‚ who suffered from epilepsy‚ ADHD‚ Tourette's and dyslexia and was classified as uneducable as a child.

“I was expected to never read‚ write‚ work or drive but understanding my perception of my mental disorders [through mentalism] has helped me overcome‚” said the man from Bothasig.

Wait, what?!?! Some Guinness World Records are just plain insane

Among the craziness, the 2018 edition of the 'Guinness World Records' book features fascinating facts and gee-whiz figures
Lifestyle
4 years ago

“I now have a positive perception which allows me to get around my conditions or manage them.”

The event will be opened by Olympic Flame Torch Runners and will also feature last year’s Miss Iran‚ Melika Razavi.

“I love motivating others and helping others who are in need‚” Razavi said.

“My mission in life is to bring a smile to those who need it the most. For this reason‚ I stand behind Nosh For Josh for the amazing work they do.”

Fox said he expected to get a few cuts and splinters but that paramedics would be on standby in case of an emergency.

South Africa has claimed a new Guinness World Records title for the tallest tower of cubcakes.
News
4 years ago

South Africa has laid claim to another Guinness world record title – this time for the largest ever gathering of dogs wearing bandanas.
News
4 years ago

On Friday evening‚ the Astronomical Society of Southern Africa (ASSA) Durban will be reaching for the stars. More specifically ASSA is hoping to ...
News
4 years ago