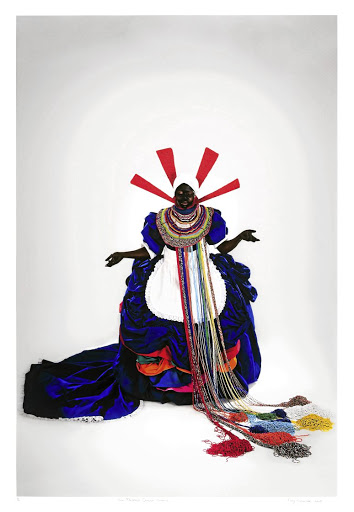 With almost 400 works in the Strauss & Co auction, art lovers' heads will be spinning.

Landscapes, still-lifes, photographs, urban street scenes ... an endless list of genres and styles will be on display at The Wanderers Club in Johannesburg from November 9 to 12, before the auction on the 13th.

Mary Sibande's Her Majesty, Queen Sophie, a 2010 staged photograph of the artist posing as her Sophie character, will be paid some attention since she won the Smithsonian Award for African Art last week.

Naturally this lends more value to this editioned photographic work, as does the fact that Sibande is one of the local artists commissioned to create an installation for the newly opened Zeitz Museum of Contemporary African Art in Cape Town.

Nevertheless, this work has social or political currency too. In the vein of the previous Sophie character works from 2009, in this scene she enacts a form of liberation for her grandmother, who was a domestic worker.

She references this via her outfit - a white apron and a blue worker's overall. In treating it to some exaggerated flourishes associated with the aristocracy, she claims a position of power and status for her ancestor that would have been denied to her during her lifetime.

On October 27, local art star Mary Sibande will receive the Smithsonian National Museum of African Art's "Award for African Art" at a dinner in ...
Lifestyle
4 years ago

It is an act of reclamation and redress that somehow in post-apartheid society has been denied. How can you confer a sense of dignity to a person after their death?

Art seems to have provided this vehicle for Sibande.

Adding to this important sociopolitical and personal gesture is that this is the only image Sibande produced that referenced African culture and status via the beaded necklace and the long strands piled at her feet.

As always Sibande offers an OTT rendition, making her grandmother and herself the ultimate queen of queens. Hail Queen Mary Sibande!