Movie Review: 'Suburbicon' is a pointless waste of talent

Directed by George Clooney, this dark crime comedy set in the 1950s misses the mark on almost every level

Image: Supplied Matt Damon and Julianne Moore in 'Suburbicon'. The writer reckons you can give the movie a miss.

A Coen Brothers film is a unique creation - written and directed by the Coens who are able to implement their singular vision on the material. When the Coens have directed films they haven't written - Intolerable Cruelty - or provided the scripts for material handled by other directors - Angelina Jolie's Unbroken or Michael Hoffman's Gambit - the absence of the brothers in the director's chair has tended to be horribly obvious and detrimental to the final product.

In the case of Suburbicon - written by the Coens and directed by their long-time acting collaborator George Clooney - the seemingly Coenesque subject matter and tone prove far too much for Clooney to handle as director. The resulting film is a disappointing, unfocused and ill-judged mess that proves to be an embarrassment for everyone involved.

Set in a fictional model 1950s town called Suburbicon where wholesome white middle-class families live their perfect versions of the post-World War II American dream, the film focuses on two stories that never quite gel - the arrival of an African-American family, which sets off an ugly race riot, and the tragic consequences of an apparent home invasion that upends the lives of the Lodge family who live next door to the unwelcome newcomers.

As the investigation into the home invasion proceeds, it turns out that all is not as it seems and patriarch Gardner Lodge (Matt Damon, uncomfortably miscast) is not quite the hardworking, grey 9-5 working man his son Nicky (Noah Jupe) has always believed him to be.

WATCH | The trailer for Suburbicon 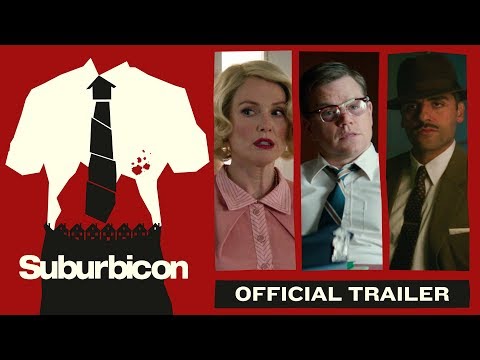 As Gardner's true nature is revealed, against the backdrop of the increasingly bizarre race riots next door, the film makes disconcertingly queasy jumps in style and tone in its attempt to paint a picture of the dark secrets hidden beneath the seemingly picture perfect facade of Suburbicon.

It's an infuriating waste of time and talent by a group of filmmakers who should all know better and it leaves you with no great insights other than that there's no point to its existence.