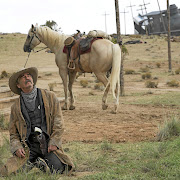 Image: Supplied There's no revisionism or tinkering with form in 'Godless'.

Resist, if you can, viewing Godless, a seven-part series now streaming on Netflix, as anything other than what it is: an old-fashioned western, and an exceptionally good one at that; its boots are firmly planted in that wide frontier country that threw up any number of the genre's classics, from Shane to Unforgiven.

There's no newfangled, revisionist notions of tinkering with form here or messing with the unsubtle allegory at its heart, and this one rides a range that's long been staked out by the likes of John Ford, Sam Peckinpah, Sergio Leone and Clint Eastwood.

And, of course, something terrible has happened here. The entire town has been razed and its citizens - every man, woman and child - slaughtered in the aftermath of a train robbery that's gone wrong. Bodies are everywhere; they litter the street where they've been gunned down, swing from makeshift gallows or smoulder in the burnt ruins of their homes.

The man responsible for this carnage is Frank Griffin (Jeff Daniels), a vengeful outlaw gang leader filled with Old Testament rage. He is literally a biblical scourge, given to quoting scripture when describing frontier life: "They have cast away the law of the Lord."

Griffin revels in the chaos and destruction he and his men have brought about with their murderous spree, attacking and robbing mining operations wherever they find them. "This here," he declares, "is the paradise of the locust, the lizard, the snake. It's the land of the blade and the rifle. It's godless country."

His madness may seem indiscriminate, but it's soon revealed that he's on a quest for revenge, and revenge is personal. Years earlier, he had taken in a young orphan, Roy Goode (Jack O'Connell), whom he'd raised as his own.

Goode - geddit? - however, has a moral centre wholly at odds with his mentor's amorality. He has not only fled from Griffin, but sets out to sabotage his criminal enterprise. To this end he's made off with the money Griffin and his men had robbed from the train.

With Griffin and 30-odd gunmen in hot pursuit, Goode winds up at a ranch run by widow Alice Fletcher (Michelle Dockery), and it is here that Godless ups a gear and comes into its own.

Fletcher, along with young son Truckee (Samuel Marty) and Native American factotum (Tantoo Cardinal), live on the outskirts of La Belle, a small town populated almost entirely by women after a mining disaster wiped out most of its menfolk.

These women, widows and prostitutes, now run La Belle. What men do live here are old and seemingly surplus to requirements. The town's sheriff, Bill McNue (Scoot McNairy), is one of them. He's had his share of grief, too: his wife died in childbirth and he blames his daughter for her passing. On top of that, he's going blind. His deputy, Whitey Winn (Thomas Brodie-Sangster), barely out of his teens, is probably the only young man in the town.

Despite, or perhaps because of the absence of men, La Belle is a model of civic propriety. This is true to one of the genre's central tenets. Women represent order in westerns; they're a civilising force. Though they may fight honourably to defend such things, the men often choose a drifter's solitude and independence over laying down roots. Typically, they ride off into the sunset as the credits roll.

It is in La Belle that Goode and Griffin will have their climactic showdown. Until then, the series' various stories unfold, in the present and in flashback.

Written and directed by Scott Frank, who co-created the series with Steven Soderbergh, its production values are first-class. It is visually stunning and the tension is knife-edge at times with explosive violence. It all makes for compulsive binge-watching.