Some parents battle to find the right gift for their child at Christmas, but imagine the struggle when your child already has everything.

When normal Monopoly won't do, how about a set made of gold? Or a crystal Rubik's cube? This is the dilemma for super-wealthy parents on the hunt for the perfect gift, because can you really put a price tag on your love for your child?

A 1.5m dinosaur might do the trick. This animatronic creature can be found at Hamleys toy stores - which can be found in South Africa's major cities - for R150,000.

Hamleys director Barry Berman said: "It moves like an animal and is triggered by motions. As kids walk past, it growls or wags its tail or opens its mouth."

The Jurassic creature arrived in the store this year and there hasn't yet been a buyer.

On the more traditional side, said Berman, the all-time favourite sellers were big plush stuffed toys such as lions, cheetahs and giraffes.

"They are over a metre high - bigger than a five-year-old child." These furry delights can cost up to R10,000.

Electric cars, the most expensive of which can cost up to R25,000, are also popular.

Berman said his wealthiest customers would arrange private viewings, arriving through the back entrance before the store opened.

"We have some families that only send helpers in, for security issues," he said.

"If we haven't got it, we'll get it. People take their shopping for kids seriously and we're happy to help."

Durbanite Kavitha Nerputh spares no expense when it comes to her three children. "They do get whatever they want. I live for my kids," she said.

"Last year Ariyana got a Louis Vuitton backpack for R50,000. This year she wants a MacBook. My four-year-old got a R20,000 designer bag."

She said her son, Junior, 20, didn't want gifts and wanted to give to charities, so she usually bought toys valued at between R10,000 and R20,000 for children's charities.

Shaun Gokal, the manager of Johannesburg toy store Baby Fantasy, said: "We used to sell bicycles, but it's a new era and people like electric motorised cars now."

He said that leading up to Christmas, the shop focused almost exclusively on electric cars, its bestselling item.

The cars run on a rechargeable battery that lasts for about an hour, if used flat-out.

Nothing says trust-fund baby like bathing in a R50,000 tub made of Swarovski crystals, or a dazzling R15,000 potty seat covered in 3,000 crystals - each sparkling stone applied by hand.

Tumi Ntswani, store manager of Swarovski in Mall of Africa, Midrand, said the shop was bustling with parents looking for gifts.

"Many are buying for six-year-olds going to big school next year," she said.

"This year we launched a Beauty and the Beast pen because of the movie. The R479 pen has Belle in her yellow gown with yellow crystals inside."

Another pen with blue crystals has Elsa from the movie Frozen.

For newborns who need something sparkly around their crib, there are figurines ranging from R1,800 to R8,000 depending on the size.

Ntswani said the most popular of the Disney characters were Mickey and Minnie Mouse, and Olaf from Frozen.

Petunia Shai, team leader at Toy Kingdom in Rosebank, Johannesburg, said Lego was consistently one of the most popular sellers.

"The Death Star [from Star Wars] is very popular and goes for around R9,000.

"We also have hoverboards with electronic balancing wheels that go for between R6,000 and R10,000. Everybody wants them."

SOME OF THE MOST EXPENSIVE GIFTS MONEY CAN BUY

The ultimate gaming console is made of 22ct gold and has three buttons made up of 78 small diamonds. Only three were made and they are described as the most unique and expensive in the world by luxury brand and maker Stuart Hughes.

Created by Australian jeweller Stefano Canturi, this version of the world's most popular doll dons a simple and elegant black dress with heels and a necklace with a 1ct square-cut pink diamond. This one-of-a-kind doll took Canturi six months to make and was auctioned off for breast cancer research in 2010. The necklace alone is worth R4,077,015.

A solid gold handmade rocking horse weighing 36kg was made by Japanese designer Ginza Tanaka as a tribute to the birth of Japan's Prince Hisahito in 2006. US power couple Beyoncé and Jay-Z paid R8-million for a version of this horse for their daughter, Blue Ivy Knowles Carter. 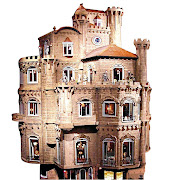 This castle has everything your heart could desire - 29 rooms over seven stories, a ballroom, library and wine cellar - all with the most extravagant fittings. The only problem is it stands at about 2.7m. US master miniaturist Elaine Diehl spent about 13 years - from 1974 - building it with the help of artisans from around the world. It has gold chandeliers, tiny bottles of real alcohol, working fireplaces, stained glass panels and original artworks.

In the past it has been displayed in museums but is now privately owned by a collector.