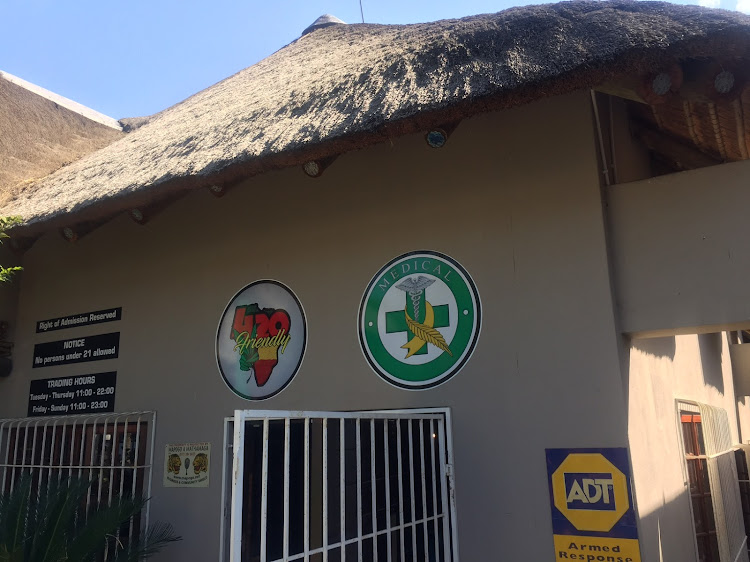 The café’s peaked thatch roof is reminiscent of a lodge in the Lowveld although‚ confusingly‚ there’s an artificial green palm tree at the entrance. The sign at the door is confirmation of what the café offers – it’s a dagga leaf with two fronds folded to form a V sign and the words “420 friendly”.

For those who don’t partake‚ 420 is slang for marijuana. Stoners in the United States get high on April 20 at 4.20pm. “420 friendly” is also used in adverts to indicate who is welcome – for example‚ adverts for housemates. Or you could say 420 to someone and they’d know you either had dope or wanted to smoke it. In some quarters it’s believed that the phrase originated from US police radio code to mean people in the act of smoking dope. But‚ according to the LA Weekly’s Michael Goldstein: “The true birth of 420 dates back to the early 1970s‚ when it became the hour of cannabis consumption among high school students in San Rafael.”

The other sign that is clearly visible at 420 Café: No persons under 21 allowed.

Sandton’s stoners don’t conform to a stereotype – among them are lawyers and businesspeople in tailored suits and high heels. Word of the coffee shop has spread‚ so patrons also come from further afield.

A citywide police crackdown on a drug syndicate saw the arrest of two men and the seizure of a hydroponic dagga lab worth more than R400‚000.
News
3 years ago

As you enter the ground floor‚ you are greeted by graffiti and a cloud of smoke – joints are smoked freely. Yes‚ freely. (I have an admission I should make: I don’t do dagga‚ so imagine my surprise.)

I was slightly disappointed that no alcohol was sold at the bar but I quickly remembered that I was on duty and still had to drive back to work.

But patrons should be aware that the reason the 420 Café is unassuming is that the jury is still out on legal issues and dagga.

The Constitutional Court is still to decide whether to uphold or strike down a Western Cape High Court ruling to allow the private use of dagga in homes. An appeal by the government was heard in November.

In a separate ongoing case in the Pretoria High Court‚ the so-called dagga couple‚ Myrtle Clarke and Julian Stobbs‚ is asking that the court declare the ban on the recreational‚ commercial and agricultural use of dagga unconstitutional thus forcing parliament to remake all laws regarding dagga.

Regular smokers must also thank marijuana activists‚ driven by Dagga Party leader Jeremy Acton and Rastafarian Garreth Prince‚ for their long‚ hard-fought battles to grant users a chance to consume the herb without having to worry about being bust.

Africa is poised to be the world’s next dagga powerhouse‚ according to a magazine which covers the development of the legal cannabis industry ...
News
3 years ago

The café is operating under the premise that it gives people who have been prescribed marijuana by a doctor a place to purchase the drug and consume it‚ out of public view.

The hours are convenient – 11am to 11pm – for those wanting a coffee and cannabis break at mid-morning‚ to feed the munchies at lunch or to pop in after work and drift away until closing time.

But it was the other menu that intrigued me. It has three categories: “Weed"‚ “Dabs” and “Other”‚ and under each category you can order such things as lemon cheese‚ boss cheese‚ super cheese‚ lemon cheese bulk pack‚ rig rental‚ darkstar dabs‚ buddha‚ weedos‚ moonrocks and cannagars.

Cheese is a strain of cannabis plant grown in the United Kingdom. Lemon cheese is a crossbreed of cheese and lemon skunk. Boss cheese is a cross between Tang Tang and Chemdog. Super cheese is reminiscent of old-school strains in Amsterdam’s coffee shops of the 1980s and created through crossing cheese strains.

Darkstar is a cross between an Afghani strain and purple kush strain and dabs are concentrated extracts of cannabis. Buddha is a cannabis strain that‚ for obvious reasons‚ is also called Laughing Buddha. The best way to describe weedos is cannabis snacks.

The South African so-called dagga-couple is closely watching the state of California where marijuana is now legal - unless it is sold in an edible ...
News
3 years ago

Moon rocks look like nuggets and consist of dagga‚ kief (“pollen” – the trichomes on the flower or leaf) and oil. Cannagars are cannabis cigars where the ground-up weed and cannabis concentrate is wrapped in dagga leaves and they’re apparently pretty smooth to smoke.

Prices start from R100 all the way to about R1‚000 a gram. Yeah‚ you have to go there with some moola – but then you get to inhale the café’s ambience as well. As do people who have been prescribed marijuana‚ with the advantage of laughter being the best medicine.

Frank‚ the owner‚ told my Sunday Times colleague the other day that he got tired of hiding and tired of waiting for social evolution and the law to catch up with the reality that “people just want a place where they can smoke that's a social‚ chilled‚ safe place.”

With staff of not more than 10‚ Frank is hands-on in the non-alcoholic bar‚ as well as in the kitchen and bakery. He’s laid-back in his vest‚ shorts and sneakers and has a variety of tattoos on his arms. His office on the second floor is paved with artificial grass.

A wooden staircase leads to the loft‚ which has comfortable couches for you to sink into. A sign in bold letters states the house rules: 1. Take a seat and wait to be served 2. No eating upstairs 3. No drugs 4. Rude and impatient people won’t be tolerated.