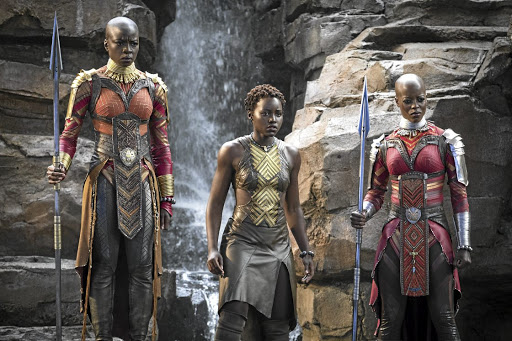 Lupita Nyong'o is flanked by Danai Gurira and Florence Kasumba, who are the Dora Milaje, the king's special forces in 'Black Panther'.
Image: Supplied

IT'S NOT ENTIRELY ORIGINAL, BUT IT'S SMART: PEARL

It's unfair to expect someone to review a movie less than 24 hours after seeing it, because there's so much to unpack and process. But that's the position we've put ourselves in as media, isn't it? We have to be the first to do it, or at the very least one of the first. So, here we are.

Set in the fictional African nation of Wakanda - a secretly resource-rich, technologically advanced, as-yet-to-be-colonised African Utopia - Black Panther is more than a superhero movie. Yes, it has cool tech, great stunts, epic fight scenes, bulletproof catsuits, fast cars, good v evil, etcetera. But it also features sociopolitical commentary in varying degrees of explicitness - would it really be a 2018 movie if it didn't flash its "woke" card once in a while?

One of the smartest decisions Marvel did was get Ryan Coogler (Fruitvale Station, Creed) on board to direct it. Because his previous films had a lot of heart (and nuance - particularly Fruitvale), he doesn't need to bury Black Panther in explosions and car chases. He tries to focus as much on the character development and back story as he does on the cool stuff that makes superhero movies superhero movies.

The main storyline picks up after T'Challa (aka Black Panther, played by the really good Chadwick Boseman) becomes king of Wakanda following his father's death in Captain America: Civil War. He goes back home for his coronation and to rule and stuff, but of course he faces some challenges and betrayals. You know, the usual. Every hero needs to be broken before being set up for a climactic return that makes both the audience and the other characters lose their minds.

The soundtrack is great. The wardrobe is dope (even though it might as well be a collage of every African culture outfit one can find through a Google image search). The women are goddesses (seriously, how does one sign up to join the Dora Milaje, Wakanda's special forces?).

The accents are atrocious (aside from Andy Serkis's evil white South African accent). The Xhosa is hilariously bad, though the cast gets a B+ for effort (and yes, Wakanda is supposed to be in West Africa and Xhosa is unlike anything in West Africa - but at least it's a real language).

Some of Black Panther is reminiscent of The Lion King. Maybe even The Dark Knight. So it's not entirely original (is anything, these days?) but it's a well-executed, smart and entertaining two-hour ride.

Marvel's yet to produce a bad movie - and the fact that this is one of the finest to date says a lot. Watch it more than once.

IT'S THE STRONGEST ENTRY INTO THE SUPERHERO GENRE IN AGES: TYMON

Since his brilliant, angry and relevant 2013 debut Fruitvale Station - a dramatisation of the last hours of police-shooting victim Oscar Grant III - director Ryan Coogler has moved skilfully up the Hollywood ladder while remaining true to his commitment to put black American lives and political concerns firmly on the agenda. Most recently he reinvigorated the Rocky franchise with Creed.

It's no surprise then that Coogler has taken on the Afrofuturist, politically charged universe of Marvel's first black hero, the Black Panther, king of the isolated but powerful domain of Wakanda whose power is based on a natural resource that's preciously guarded and allows its people to develop superior technology.

The king is forcefully supported in his ventures into the real world to stop would-be smugglers and threats to the kingdom by a formidably powerful variety of strong Wakandan women.

Using the traditional superhero story of a hero striving to fight against both injustice and his personal demons, Coogler and co-writer Joe Robert Cole carve as complex a consideration of broader political issues around race, gender and leadership as has yet been seen within the Marvel Comics universe. 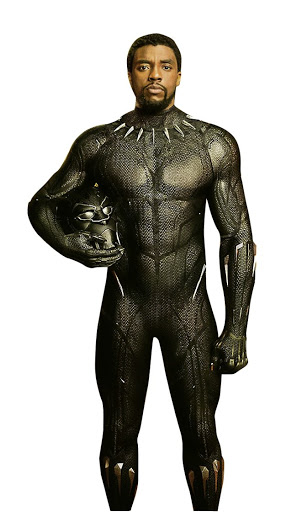 While it's sometimes a little on the nose and heavy-handed, Black Panther is easily the strongest entry into the genre in ages and it manages to say something meaningful and relevant in an age when so much time is spent on the meaningless and irrelevant tweetings of a certain deranged megalomaniac. In a more reasonable era, perhaps it would be easier to take the film to task for some of the heavy-handedness of its messaging, but this is not a reasonable era and when it comes to questions of race, has there ever been one?

There are also debates to be had about the way in which, while it's refreshing to see an inclusive and positive consideration of Africa in a major blockbuster, the conversation and interpretation of the continent are still reflected through a lens which moves from the outside in. The score by Swedish composer Ludwig Göransson is particularly guilty of this, ending up far too Lion King when it should be more Sun Ra.

There are of course the obligatory annoying Marvel regulars such as the Stan Lee cameo and the slightly over-long final action sequence but overall Coogler and his stellar cast have injected some much-needed real-world thoughtfulness into a genre that's tended for far too long to emphasise easy bombastic thrills to make quick box-office bucks.

The internet has been abuzz following the Hollywood premiere of the wildly-anticipated Black Panther movie earlier this week. The already historic ...
Lifestyle
4 years ago

For many SA music fans, the first time they had heard of Yugen Blakrok was when the star-studded tracklist for the Black Panther movie was released ...
TshisaLIVE
4 years ago