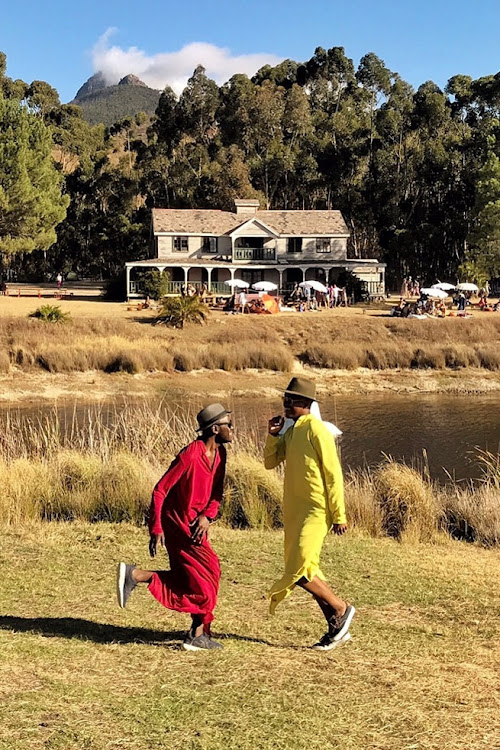 Revellers at the Littlegig festival in Stellenbosch in 2017.
Image: Jonx Pillemer

Forty minutes outside Cape Town, in a forest at Wiesenhof Farm, there’s an annual pilgrimage of usually around 800 revelers, gathering for 24 hours of music, design, art and food.

For the past two years, every February, the plush, intimate setting with scenic views and a dam to boot has played host to Little Gig, a festival organised by former copywriter and magazine journalist-turned-festival promoter Georgia Black.

On arrival, guests find tents already set-up for them, and as soon as you wander into the festival grounds, you are greeted by a carefully curated fashion stall, set up on a patch of land with a few trees at the centre of the forest. In the open space around it, stands a plankhouse that overlooks the dam, across from which is an island where one of the festival’s music stages is set-up.

Last year, this is the island that the impressive DJ Black Coffee prodigy Culoe De Song turned into an open-air dance floor as revelers danced and paraded their often beautifully outlandish costumes as the sun set, casting a blanket of stars over what is most probably the most picturesque festival setting many have ever seen.

In attendance is the who’s-who of Cape Town’s arts and media community, here to let their hair down in the company of like-minded people. Top chefs prepare hot meals throughout the day, the champagne, or whatever beverage you prefer, flows throughout the twenty-four hours with bars set up all around the venue, and its all included in the ticket price at what is quite possibly the world’s only truly cashless festival.

Well, until now, this concept of an all-inclusive music and arts festival has been unique to Black’s Little Gig. It was only a few weeks ago that an alcohol brand sponsored-festival that follows Black’s template was announced, and then held two weeks ago, but just a few years ago, it was unthinkable.

“I went to South By South West in the US and at the talks, there were quite a lot of festival organisers from around the world,” says Black, a University of Cape Town alumnus. “When I told people about this idea I have, they said ‘no way’!”

While she has always been interested in the entertainment and lifestyle space, it was the lack of “creative options” in the Cape Town nightlife offering that led Black to founding Little Gig. After hosting a few gigs in the city, Black said she felt like she needed to do more.

“Whatever you do usually starts with your own social circle, and that’s how I started, and I think people in my social circle probably felt the same way I do, that they are busy, and if they do go out somewhere the experience needs to be worth their time.”

Being detail-oriented, the experience of the festival became an important pillar for Black as she moved to create Little Gig. “There is a strong emphasis on area design. My personal interests go beyond just the music, so while a lot of festivals rely heavily on headliners, for us, we look at it from the perspective of the entire tapestry of experiences, food, wine, etc.”

• Tickets are now sold out.