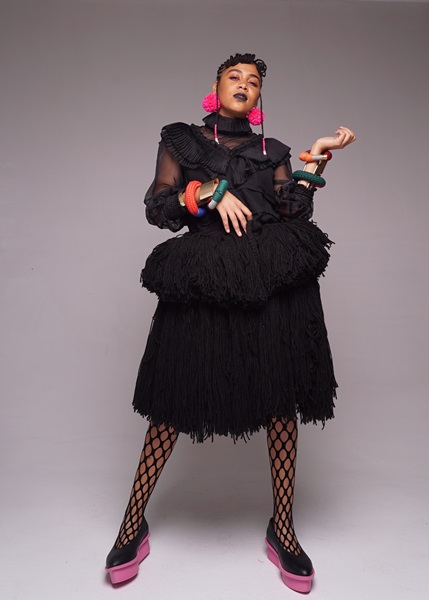 Sho Majozi dances xebelane on night-club stages across the country and beyond.
Image: Supplied

Never turn down an opportunity to have sex or to be on television, said American writer Gore Vidal. It was the '70s and the land of the fallen rand was light years from becoming the Gqom Nation. Besides, television hadn't arrived on our shores yet.

But it's 2018 now and there's a new generation of women setting the tone of our pop culture in the spirit of Vidal's carnal advice and other pioneering ways. These are the women of gqom music. They are bent on marshalling a defiantly joyful beat to claim their voices in a tradition shaped by a dictum that women appear, and men act.

However, it's not hard to tell that phenomenal female pop figures from Babes Wodumo, Busiswa, Moonchild Sanelly and Zodwa Wabantu to Fiesta Black are clawing at more than just appearing or simply being seen.

Think of the larger symbolic force that is invoked every time Sho Majozi dances xebelane on night-club stages across the country and beyond. Xebelane is both the heavy colourful traditional skirt of the Tsonga/Shangaan people and the ritual dance performed wearing the skirt.

Majozi's playful rhyming style won her the hearts of mesmerised fans across the pop world. She has given permission for a lot of young people to proudly claim their traditional cultural traits as valid ingredients of pop culture.

This symbolism found its sharpest articulation with her role as a superhero, The Rain Queen, in Absolut's One Source Live festival alongside rapper Khuli Chana and three others projected as African Creatives as superheroes.

No one in gqom has taken on Vidal's dictum of sex and the allure of being seen as spectacularly as Zodwa Wabantu. She has practically inaugurated herself as a kind of high-priestess of gqom's sexual liberationist charge with all its sensual excesses.

Known for her racy performances alongside DJ Tira, she is even more meaningful precisely because she is not a recording artist or dancer - at least in the traditional sense. Her mode is simply to accompany the music and present her confidence in her sexiness.

A recent video went viral with a bikini-clad Zodwa Wa Bantu declaring her credo: "Men like us like this, naked, we have sex at night and we taste nice! Use your a**. This is your power. I mean I don't even know how to dance but I get R35,000. So my fellow b**ches, be yourselves, don't change."

Often dubbed the queen of qqom, Babes Wodumo addresses the pop culture police on her own terms. She is winning a power contest that has historically faulted and undermined many musicians simply on the basis of their apparent inability to speak the English language with model-C command.

Insisting on doing interviews in her Zulu vernacular means she is in control of the tenor of her conversation with the public. Babes has taken back her power as subject of her creative story. This has given her the girl-next-door appeal that keeps her winning.

Perhaps few lurched on the television bit of Vidal with as much savvy as Ntando Duma. The vibrant host of the MTV Base show Gqom Nation is emerging as a kind of queen on the gqom dance floor, at least in the genre television life.

Duma's apparent pop industrial savvy has seen her take advantage of the social media age's blurring line between what was once a rigid distinction between being famous and being talked about. She's rising from being a video girl to a pop phenomenon in her own right.

Mzansi has been shining bright with heavy presence on upcoming blockbuster film Black Panther, but when it emerged that Babes Wodumo, Sjava and Saudi ...
TshisaLIVE
4 years ago

To celebrate gqom's black girl magic implicates us in embracing it as the dominant pop cultural accent rooted in the Zuma years. This means we must locate it alongside politics of #Fallism and the rise of pop-afro-feminism.

Gqom music, defiantly joyous, is more than the spells cast by its infectious rhythm of dark drum patterns and a thumping beat.