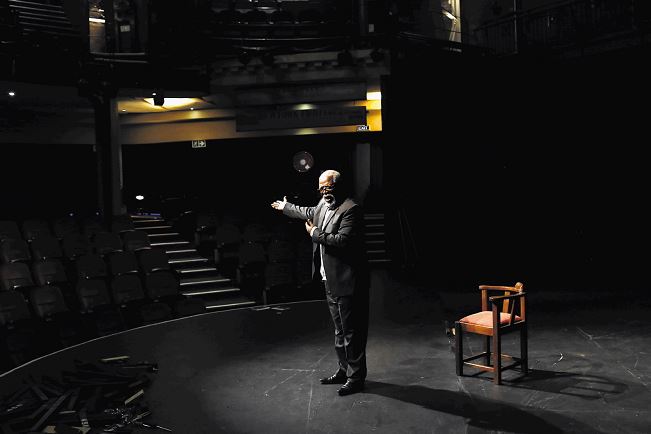 John Kani, fresh from playing King T'Chaka in the 'Black Panther' blockbuster, on the stage of the Market Theatre in Joburg where, he says, you can see the footprints of Maya Angelou and Sidney Poitier.
Image: Alon Skuy

You hear him before you see him. A deep, penetrating voice that can fill a theatre. A hearty laugh that makes you forget anyone else is in the room.

Inside the Market Theatre venue named after him, we hear Dr John Kani approaching; he has been out of South Africa for a spell and there are revered greetings of "Tata", punctuated by roars of laughter.

Towering in presence if not in stature, Kani was introduced to the cast of Black Panther by director Ryan Coogler as the John Kani, but the actor makes light of the big-budget Marvel adaptation that has had him rushed off his feet since it opened last month. He calls it "that comic-book film".

The blockbuster has been deemed revolutionary for its positive depiction of a black superhero in an uncolonised and technologically advanced African country, as well as its majority black cast and crew.

'Black Panther' fans are trying to book hotels in Wakanda

After weeks of promoting it to thrilled filmgoers, Kani has time to visit the Market Theatre, his favourite place. At one point he climbs onto the stage, once the soapbox for Indian fruit and vegetable sellers to tout their goods.

"They gave us the chance to perform here, you know," he says of the traders. The market was a thorn in the side of the apartheid regime because it allowed all races to mix under one roof to trade. That morphed into an underground opportunity for theatre performances of censored material in front of mixed audiences.

"People came here to exchange money for goods," says Kani. "We made it a place to exchange ideas. If you stand here and keep quiet you can hear the echoes of past performances. Maya Angelou was here. Sidney Poitier. You can see their footprints."

Kani turns 75 this year and refers to himself as an elder. He says it may be time for his memoirs, and to play King Lear, although his next film role is alongside Chiwetel Ejiofor, James Earl Jones and Beyoncé in a remake of The Lion King (he voices Rafiki).

He takes us through the framed production posters that remind us why he is household name. Two recall the reaction to his early stage kisses with young actresses.

He says Joanna Weinberg was "so ostracised by the industry and got so much hate mail that she emigrated to Australia" after Othello in 1987. Half the audience walked out when it was Sandra Prinsloo playing Miss Julie.

Times have changed. Today the focus is on his role as T'Chaka in Black Panther.

It was not a huge part but Kani was pivotal in giving the fictional African nation of Wakanda its language - Xhosa, which the movie franchise will keep for generations.

In just five years, director Ryan Coogler has gone from being the darling of the indie circuit with a debut film shot on a shoestring budget to being ...
Lifestyle
4 years ago

South African audiences reacted with such enthusiasm to the film's African references that Kani says he enjoyed the premiere screening at Montecasino in Johannesburg more than the one in Los Angeles.

"I am riding the rollercoaster with great excitement, which at my age ... "

"Do not believe that it will convince them that there are more bankable black stars. It is just Black Panther, it's going to make a lot of money and the next thing they will do Ant Man 2. It's their prerogative.

"But we are enjoying the added benefits, the spin-offs of this incredible comic-book hero. And what we feel as Africans here for the first time, there's a hero and he's black. Children in rural communities, townships, in remote parts of Africa, who were always seeing heroes of Spider-Man and Iron Man ... Isn't it wonderful with the little kid in the cinema, when the Panther's mask is removed: he is black! And he's a hero, he's doing absolutely incredible things."

Kani knows how to deliver a message, even if it comes in comic-book form. He has been a cultural activist for six decades.

"A work of art has the power to have an incredible impact on the individual. But the relationship between the artwork and audience is a singular relation. It doesn't speak to the stadium and audience, it addresses the individual who walks out of the art gallery or theatre feeling moved, fulfilled and changed, inspired. They begin to examine their own lives and direction. Seeing a good, provocative play makes you think as an individual. One then hopes there is a small shift towards your hope and where you come from."

He says, however, that the "woke" young people who dressed up in traditional finery to watch Black Panther must remember that the sentiment is great for the representation of African people and the diaspora, but perhaps not for the continent itself.

Acclaimed costume designer Ruth E. Carter on bringing the world of Wakanda to life through fashion and why her costumes resonate strongly with ...
Lifestyle
4 years ago

"Yes, there is a lot of excitement, but there isn't a single film company on the continent in Africa that can afford that budget. The movie cost about $200-million [R2.3-billion]. What can you not do if you have that money?"

He points out that this funding disparity is not only in the movie industry.

"If South Africa didn't have such a huge multitrillion deficit, if we had the budget that Trump is playing with, we would be talking about certain huge problems here as a thing of history. We are struggling with a tiny budget, a debt of forever back-pedalling with the GDP, exporting less and importing more. VAT is going up, it restricts even the vision of a good leader or finance minister. "

If a local film has R10-million, it's a huge budget and you can begin to explore. But some budgets are R750,000. We don't do more than one take

Stemming his tirade, he returns to the subject of movies.

And back he goes to politics: "This year we are celebrating Nelson Mandela's centenary and it makes you think, my, the world has a serious lack of credible, substantial leaders. Instead of celebrating, I am mourning Nelson Mandela, as if he just passed."

"We seem to think we are too far south for it to have any impact on us, but our economy is interlinked with these countries, as are our freedoms, everything."

"There is a glimmer of hope now that we have a new leader in this country. You can only be hopeful."

Kani says he too is impatient for change, but there is undoing to be done in South Africa. He says it is time to listen to the youth about mistakes his generation might have made. Change cannot be delayed, it festers and becomes discontent.

"Seasons change. Suddenly the youth are beginning to ask us as elders: 'What did you do?'

"In one of my plays I say that as a liberation movement we walked in expecting freedom but we walked out with democracy. The deficiencies the youth are seeing are the by-product of a negotiated settlement.

"We now have youth that started school in 1994. Twenty years later they have graduated with degrees and skills - but there is no work."

Kani takes a moment to breathe, then says he sees himself as part of a community.

"I am a member of the village. The fact that I write, direct, act and speak out as a cultural activist does not take me away from the village. It is not a matter of being respected as an actor, but of what I have done to make someone's life better."

He says the village elders in Port Elizabeth, where he grew up, refer to him as the son of his father.

"They can't be bothered with my CV. They know where I come from."

He feels accountable to the elders and to the new generation of young, jobless South Africans. Of his actor son Athandwa, Kani says he must learn "to be rich" and then help others.

Kani says, only half-joking, that his own success is debatable when he considers his bank balance, drawing parallels between politics and the state of the film industry. "We must stop and say, 'We tried all other options, can't we try the African point of view now?'

"Why can't we fund a really great African movie that can open in Joburg, play in Zimbabwe and Mozambique and right up the continent? By the time it reaches Tripoli it would have broken even and then we take it to the rest of the world.

Why do we wait for a back-door entrance to the Oscars with a foreign-language film? Australia, Nollywood and Bollywood have done it and stand on their own, why not us?

"Why do we wait for a back-door entrance to the Oscars with a foreign-language film? Australia, Nollywood and Bollywood have done it and stand on their own, why not us? If we take a business plan to Patrice Motsepe or Cyril Ramaphosa and show how a R50-million movie can make double, triple ... will we not make better films? It is a business, sweetheart, and we need to think of everything that way."

This is where he hopes the effect of Black Panther will reach beyond entertainment value.

He adds: "We have to move away from movies that are about the past and dignity, humanity, spiritualism. We have to cross over to ultra-commercialism.

There are many things Kani has an issue with. One thing he has no qualms about, however, is giving his grandchildren enough sweets to "make their faces fat". "Nobody tell me otherwise," he bellows. "It is my right!"

Here are some of his thoughts on digital matters:

• "Social media has been very useful in telling us how well a show is doing. If someone is going to see it for the fifth time they will tell you. It's better than a newspaper critic who gives you one chance."

• "I tried to be on Facebook but I used my personal e-mail address and the next day I had 65,000 people wanting to be my friend. I told my son to get me out of this now."

• "I used Twitter to make myself available to younger writers who wanted to ask me questions. Suddenly it was all about liking and retweeting. Influencing. I don't know."