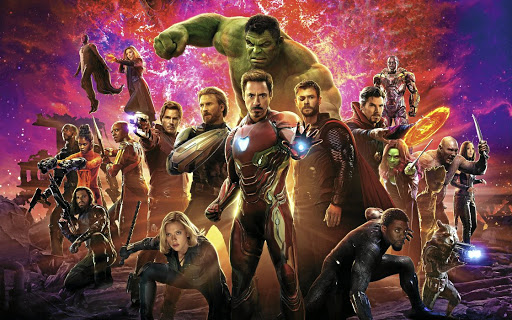 'Avengers: Infinity War' brings more than 30 Marvel characters together in a sprawling interplanetary battle for the universe.
Image: Supplied

In the decade since the first Iron Man film, Marvel has produced 19 movies, which have grossed billions of dollars and turned its comic-book-obsessed president, Kevin Feige, into one of the most powerful people in Hollywood.

While the Marvel Cinematic Universe has managed to satisfy die-hard fans of the comics and create its own special kind of fan-boy geeky armies of devotees, for those of us who only really experience the world through the films, things can get very frustrating and overwhelming.

Nothing epitomises this more than the much-anticipated "10 years in the making" Avengers: Infinity War.

Directed by brothers Anthony and Joe Russo, who have done better-than-average work on the Captain America franchise, the film is an ambitious but flawed attempt to throw the entire Marvel kitchen sink at the screen, bringing together more than 30 characters in a sprawling interplanetary battle for the universe.

It pits everyone from Iron Man, The Hulk, Captain America and Spider-Man to Dr Strange, the Guardians of the Galaxy and Thor against super-villain Thanos.

For die-hards there's plenty to enjoy and something for every fan of every franchise, complete with some reasonably funny one-liners and an action-packed Wakanda fight, which keeps the phenomenal success of the recent Black Panther firmly in the spotlight. However, it seems that neither Feige (who produces) nor the Russo brothers have learnt much from the irritations and failings of previous endeavours.

Too many plots definitely over-spice the broth and as usual there's that inevitable extra half-hour high-action sequence that drags down the pace.

After an hour and a half you'll soon stop pretending to be wowed by the introduction of yet another character and another plot that needs to be resolved and just sigh as you realise that no amount of time can resolve anything satisfactorily.

While Josh Brolin offers a tender and complicated motion-capture performance as Thanos, the purple giant in search of universal dominance, and Robert Downey Jn chews up the scenery in the only role he seems motivated to take anymore as Iron Man, there's really far too much being attempted here and so most of the relationships don't have anything worth caring about at their core.

The pairing of different characters in different storylines provides a certain amount of initial pleasure and humorous interactions, but this is soon subsumed by the overall muddiness and lack of focus of a story that leaves you feeling like you're watching bits of 20 unfinished films rather than one solidly directed adventure.

The pairing of different characters in different storylines provides a certain amount of initial pleasure and humorous interactions, but this is soon subsumed by the overall muddiness

It's certainly better conceived than rival DC's recent multi-character attempts Suicide Squad and Justice League, but the Avengers reveals the limits of attempting to smash the multi-stranded, long-running narratives of its source material into an exhausting two-and-a-half hours of screen time.

Several of Marvel's Netflix series suffer from a similar affliction, even though those have the luxury of time to unwind their stories. At some inevitable stage the adolescent desire for a big "skop, skiet en donder" moment overpowers everything else and results in messy action that sweeps away all the hard character work.

By the time the downbeat ending arrives and the credits roll for long enough to allow the 30-plus actors to have their recognition, you might breathe a sigh of relief thinking that perhaps there will be fewer but more considered Marvel films in future.

You'd be wrong, though, as the inevitable post-credit teaser appears, opening the door to millions of internet discussions about where and what and who will be next to be given the now annoyingly unsatisfying and predictable page-to-screen treatment.

You can be sure that those speculations will ensure that the universe of Marvel will, like ours, continue to expand whether you like it or not.

'Black Panther' fans are trying to book hotels in Wakanda

How does a superhero relax? With a cup of rooibos‚ naturally

In the latest edition of Marvel's She-Hulk‚ the eponymous hero is offered a cup of rooibos tea by psychiatrist Flo Mayer to "calm her down"‚ ...
Lifestyle
4 years ago