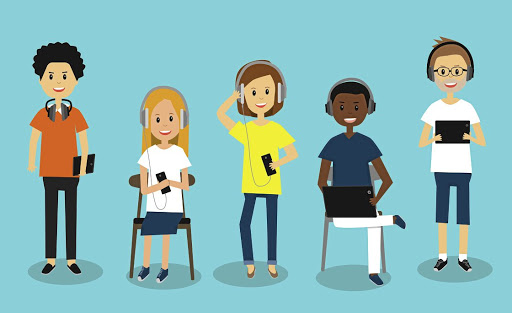 Generation Z are seemingly online 24/7 but are very conscious of the world around them.
Image: 123RF/pppfoto15

Hallelujah, the day has finally come! After years of shouldering the blame for a confusing assortment of the world's ills, millennials, that ragtag assortment of tech-addled youngsters, have ceased to be the age group du jour. That burden has now officially been hitched to the backs of Generation Z, the technology-immersed younger siblings of the millennials who came before them.

People who fall into Generation Z are generally kids whose ages range from around 10 to people in their very early 20s. They are the products of the mid '90s and early 2000s who've never known a world without smartphones and easy access to the internet. Apparently that has helped make them woke.

"Generation Z are hyper aware of social injustices. They are the post-9/11, post-Great Recession generation and they don't want to make the same mistakes as their parents. I call them the self-correcting generation," says Dion Chang, trend analyst and founder of Flux Trends, which has been conducting research into Generation Z over the past few years.

Have smartphones destroyed a generation?

These are the kids who have grown up watching their parents bungle climate change, tank a global economy through greed, and squabble over petty issues like another person's gender identity. They have declared: "That's a no from me!"

"Gen Z are kind of the first generation to be completely accepting of gender issues," says Chang, recounting the story of two children of a friend of his, aged nine and 15, casually explaining different sexual identities to one another while unpacking the dishwasher.

Again, their connection to the internet can be credited for this. Many parents fear that too much time spent on screens is making their children asocial because they grew up in a time characterised by face-to-face interaction.

What they seem to forget about that time is how it also encouraged a kind of groupthink. Kids who were or felt different had no choice but to suppress those aspects of themselves the group found "weird".

Internet access has allowed Generation Z to connect with like-minded communities, and has normalised the existence of communities that were perhaps not as prominent on the playground. As the millennial father of a Gen Z (she's 10) this is probably the biggest difference between the two of us.

At her age, my primary preoccupations may have been running and being the best at kissing catchers, but even then it was well known that boys didn't do certain things, such as play with Barbies.

At the time the idea that people were anything other than heterosexual could not have been more alien to me. For my daughter, however, someone being LGBTQIA+ is as natural as breathing, a realisation that only came to me later in life.

Perhaps that is the main difference between millennials and Gen Zers. The younger population group seem innately immersed in certain causes. They don't use straws because straws murder turtles and they're not as keen on fizzy drinks because sugar is the devil's work.

Obviously these kind of mindsets are based on a number of different factors, including privilege, and thus cannot be said to be applicable to all members of Generation Z.

This kind of natural state of wokeness is also manifesting in the kind of brand affiliations Generation Z makes.

"The era of simply doing business for the bottom line is long gone. Generation Z increasingly affiliates with brands that share their values ... so it is getting increasingly uncomfortable for brands because they have never had to stick their necks out before," says Chang.

In the past, kids couldn’t wait to get their driver’s licenses. Now? Not so much
Lifestyle
4 years ago

Sadly, it's not all champagne and politically correct streamers, especially for Generation Zers from South Africa. According to Chang's research, we are heading towards a "terrifying bottleneck" somewhere in the middle of the century.

To hear him tell it, the day is coming when our very young population, who have been educated in a system unsuited for modern challenges, will reach the age when they have children of their own. Those families and the resultant population boom they cause will run headlong into an economy shedding jobs because of technological advancement.

"Our education system was spawned in the 20th century. We are still teaching children to memorise things rather than gearing our system towards something more knowledge-based," says Chang.

"In 2015 I started to question the value of certain degrees. You have a young generation where that young person may be the first person to get a degree and that degree is supposed to open doors, but these days that is often not the case," says Chang.

The future looks complicated for Generation Z, but to be fair, when has it not looked complex for any generation? Back in the days when MTV played music videos, many an adult ran around frantically trying to understand Generation X. That hysteria would later be transferred to millennials, and now it's someone else's turn.

Regardless of the influences and issues facing any particular generation, the world keeps turning. Generation Z will make their own mistakes and spawn a new crop of kids that parents will freak out about. In the words of the lions of Pride Rock "it's the circle of life".