'The Long March To Freedom', an ambitious sculpture installation at Tshwane's National Heritage Monument, aims to redress 'the lack of representation of black icons' in South Africa, writes Sean O'Toole 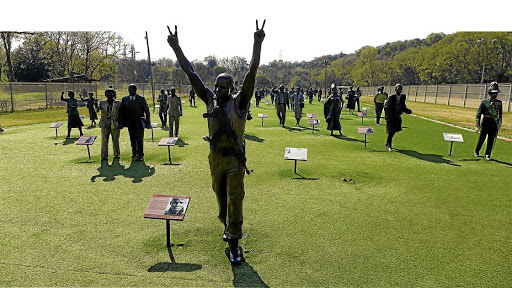 Adam Madebe's bronze of hanged activist Solomon Mahlangu is at the forefront of the procession of sculptures known as 'The Long March To Freedom'.
Image: Sean O'Toole

I can think of no other South African city that rivals Pretoria in its urge to seize the past and turn it into a bronze fetish. Wherever you look, be it the terraced gardens of the Union Buildings or its white-flight malls in the east, there are bronze statues. Some are benign, but as many are dedicated to memorialising dignitaries from our past.

There are the familiar old standards like sculptor Anton van Wouw's bronze of Boer president Paul Kruger on Church Square, now ring-fenced for his own safety following a national outbreak of statue toppling and vandalism in 2015.

Among the new there is Angus Taylor's 6.2m-high bronze of contested Ndebele king, Chief Tshwane, after whom the City of Tshwane is named. It sits outside the city hall.

At the Union Buildings, Ruhan Janse van Vuuren and André Prinsloo's 9m-high bronze of a munificent Nelson Mandela is now a popular spot for wedding photos.

But even for a town attitudinally orientated towards bronze, the activities at Groenkloof Nature Reserve, at the southern gateway to the city, beggar belief.

Two years ago, Arts and Culture Minister Nathi Mthethwa launched the National Heritage Monument (NHM), a new project "to unify all South Africans". The centrepiece is a procession of 100 life-size bronze sculptures.

Some of the historical figures immortalised in bronze were famous for picketing, one played cricket, another sang songs, quite a few lawyered, one was shouted at in parliament by PW Botha and a fair number spent time in jail

Billed as The Long March to Freedom, the bronze procession faces south towards Johannesburg and includes a miscellany of historical figures. Some were famous for picketing, one played cricket, another sang songs, quite a few lawyered, one was shouted at in parliament by PW Botha and a fair number spent time in jail. Others, like Steve Biko and Solomon Mahlangu, gave up their lives while resisting history set in motion by the arrival of white settlers.

Drawing on the expertise of historians Phil Bonner, Luli Calinicos and Tariq Mellet, as well as former arts and culture minister Pallo Jordan, the procession aims to redress "the lack of representation of black South African icons", according to Sarah Haines of the National Heritage Project Company, which oversees the project.

The government-backed project goes back a number of years. In a 2013 parliamentary briefing, the project company's CEO Dali Tambo said the plan was to create "400 to 500 life-sized bronze statues of leaders of the struggles who represented the soul of South Africa".

He quoted a 1993 heritage report that said 99% of South African heritage was about white experiences, white stories and white figures of history. The new project, he elaborated, was not to destroy the past but augment it by the addition of more bronzes. 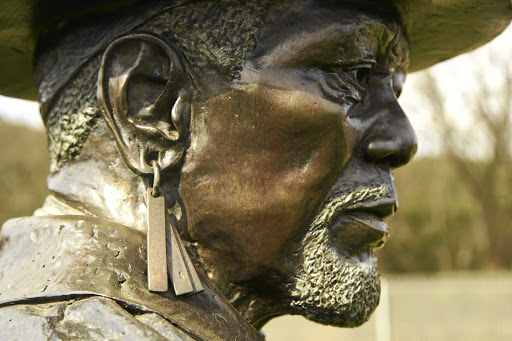 King Moshoeshoe I is one of an array of historical figures depicted at Pretoria's National Heritage Monument.
Image: Supplied

But why bronze statues? To establish "resonance among tourists, who so far are focused on the South African wine farms, beaches, natural reserves and parks", failing to see into the "soul and history of the South African people", Tambo is quoted as saying.

Alongside the bronze sculptures, the dream is to establish Africa's largest water park and a monumental piazza called Heroes' Acre (never mind that a section of the old Church Street Cemetery where Kruger and Hendrik Verwoerd are buried is already known by this name).

"To date, only the 100 bronzes that make up The Long March to Freedom, and the master planning for the scheme, have been completed," said Haines. She suggested that the project would cost between R7-million and R8-million. But in his parliamentary briefing Tambo stated that the NHPC needed up to R800-million. The truth of how much it will end up costing is somewhere in the hazy in-between.

Despite its vague air of a confidence trick, the heritage park is worth a visit. It offers a well-researched if hectoring lesson in history - history, one learns, is something that bypassed farm workers, domestic servants, gold miners and your family. Apartheid was toppled by elites. 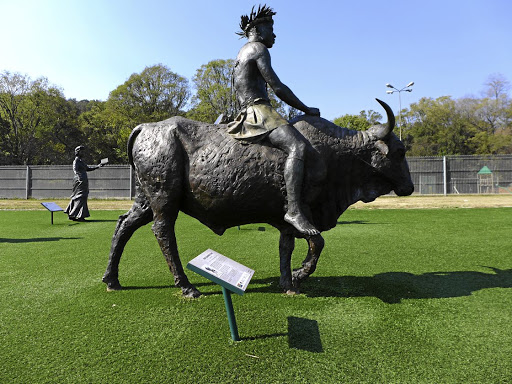 Kgamanyane Pilane, chief of the baKgatla-baKgafela and "defier of Paul Kruger", is depicted astride a bull at Pretoria's National Heritage Monument.
Image: Supplied

Among the works on view is an interpretive bronze of Kgamanyane Pilane, chief of the baKgatla-baKgafela and "defier of Paul Kruger", astride a bull. The work is by artists Guy du Toit and Egon Tania, who also produced representations of trade unionist Clements Kadalie and writer Sol Plaatje pushing a bicycle.

The Plaatje bronze is positioned in the middle of the procession, just behind Taylor's life-size bronze of South African Native National Congress lawyer Pixley ka Isaka Seme, a past president of the ANC.

Jointly leading the procession are Mandela, flanked on his right by Walter and Albertina Sisulu, and to his left Oliver and Adelaide Tambo. Unlike the figures at the rear, including Keith Calder's furrowed study of Khoi chief Klaas Stuurman, the liberation aristocracy upfront are all smiles and triumphant waves. 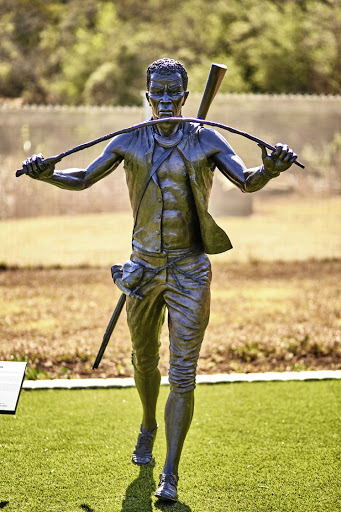 So far, so normal; it gets weirder just behind the frontline. Nearby Zelda Stroud's bronze of Joe Slovo, who looks to be headed off to the shops, are bronzes of Cuban president Fidel Castro, Ethiopian emperor Haile Selassie and former Swedish prime minister Olof Palme. The latter wears a rain jacket and red tie.

There is no bronze of Winnie Madikizela-Mandela. Women, though, are fairly championed, if not always justly portrayed. Jean Doyle's likeness of singer Miriam Makeba is a terrifying piece of kitsch, Tretchikoff realised in three dimensions.

White artists produced most of the sculptures, although every commissioned work has an "empowerment element", said Haines. "The project has done so much for skills transfer in this particular sector and literally revived the sculpture industry."

About 60km southwest of Pretoria, in the Cradle of Humankind, Nirox Foundation is hosting a large sculpture exhibition until July 29.

Produced in collaboration with Sweden's Wanas Foundation, the sprawling showcase includes Mary Sibande's procession Let Slip the Dogs of War. The installation comprises a resin likeness of the artist in purple dress leading a procession of three red dogs and two red vultures past a tree decorated with purple, sperm-like forms. 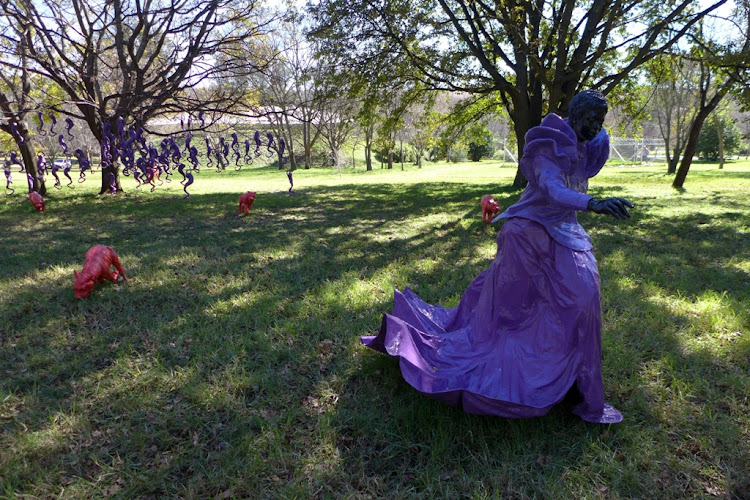 It is installed near Jane Alexander's piece Security, which presents an anthropomorphised vulture inside a rectangular cage. The juxtaposition is fitting. Alexander's existential worldview is, at times, pitiless, but her practice is grounded in deep craft. By comparison, Sibande's work is materially impoverished and wanting as a formal exercise in sculpture.

One of Alexander's key historical works is African Adventure (1999-2002), also a processional installation that comprises 13 individually titled figures. (It is not on view at Nirox.)

Alexander's contemporary, William Kentridge, whose theatrical procession The Head and The Load premieres at the Tate Modern this month, has also long explored the marching train in his practice.

Do these highbrow art references redeem the bronze cortège in Pretoria? Perhaps. Personally, though, I'm with Christopher Hope, another ex-Pretoria boytjie.

Reworked not with cement or steel, but as is habit in Pretoria, with bronze.

Nic Bladen shines a spotlight on the threat of global warming by casting unique botanicals into bronze, creating artworks he hopes will last as ...
Lifestyle
4 years ago

The opening of the striking Norval Foundation museum in Cape Town has added yet another cultural landmark to the art-rich city, writes Andrea Nagel
Lifestyle
4 years ago

In 'The Land Will Decide', artist Setlamorago Mashilo explores the sub-narratives around land, including our obsession with it and the plight of ...
Lifestyle
4 years ago