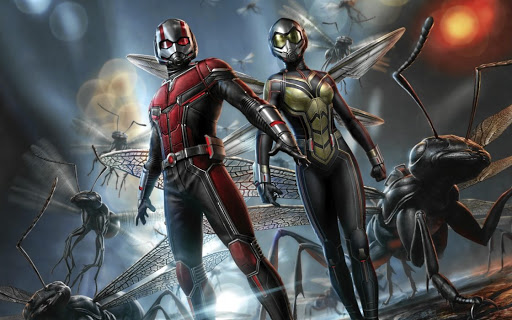 Ant-Man and The Wasp.
Image: Supplied

Alot has happened in the Marvel Comics Universe since Paul Rudd first graced screens as the hard-to-dislike Ant-Man in 2015. Since then we've seen reams of online commentary on the sociopolitical ramifications of blockbuster breakouts such as Black Panther and The Avengers: Infinity War, and forgotten that sometimes comic-book adaptations can just be no-strings-attached fun to watch for two hours and then forget about.

Well fear not, because AntMan and The Wasp, the last of the year's outings from the studio, is here to remind us of those escapist pleasures.

Director Peyton Reed's sequel requires a little reminder of the first outing but not so much that you have to enrol yourself in a refresher course. Thankfully, unlike so many recent films in the Marvel Comics Universe, you don't have to spend hours trying to figure out interconnections and possible repercussions - until the inevitable post-credit sequence, that is.

WATCH | The trailer for Ant-Man and The Wasp

We pick up the action a few years after the first film's end, and in the wake of consequences attached to his actions in Captain America: Civil War, where ex-con Scott Lang (Rudd) is doing his best to be a good dad to daughter Cassie (Abby Ryder Forston), while serving out his last few weeks of house arrest. He is trying to forget about his alternative life as the master of the powers of the shrinking Ant-Man suit developed by super-scientist Dr Hank Pym (Michael Douglas).

Scott's only other real focus is on securing contracts for the company he and fellow ex-con Luis (Michael Peña) have set up. However, when Hank and daughter Hope (Evangeline Lilly) come calling for assistance in returning to the sub-quantum realm and finding missing mom Janet (Michelle Pfeiffer), things take that oh-no-but-surely-you-saw-that-coming turn for the worse.

There are further complications when it turns out that Pym's former colleague Dr Bill Forster is also intent on getting access to Pym's lab and sub-quantum travel facilities to save his daughter Ava (Hannah John-Kamen) and that Pym's tech genius has also attracted the attentions of ruthless corner-cutting capitalist Sonny Burch (Walton Goggins).

Now that all sounds rather complicated but in Reed's capably light and humorous hands it's all more fodder for a series of funny and smart set-pieces rather than anything too heavily philosophical or depressingly Trump-era related.

The central ability of our hero to reduce and increase his size at will leads to an expanded series of inventive and enjoyably clever, imaginative sequences. And, thanks to the infectious and hard-to-really-dislike charms of Rudd and the rest of the cast (who are clearly having a good old blast), it's hard to get too annoyed with anything.

Yes, there are those achingly-heartfelt moments of sentimental rumination on family bonds and parental obligations, but overall the Marvel Comics Universe can be thankful that it still has an Ant-Man to bring it back to some of the essential, fun and much-needed get-away-from-it-all-and-have-a-laugh experiences it needs to undercut its increasingly ponderous, world-threatening recent expeditions.

WATCH | Which is the best Netflix Original Marvel show?

In 2013 Marvel and Netflix entered into a deal that saw the streaming service bring six live-action superhero TV shows to the small screen.
Lifestyle
3 years ago

Marvel's 'Black Lightning' is social commentary dressed up in a cape