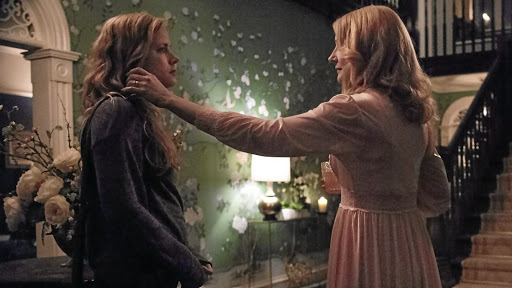 Like bad acid reflux, Sharp Objects is a slow-burning ball of tension in your gut. This is compelling TV. The drama's first few episodes (out of eight) have been screened on HBO and so far it's simmering and uncomfortable.

If you want to compare it to something, it feels like True Detective (season one only - season two and Vince Vaughn should be erased from our collective memories) mixed with Big Little Lies mixed with Twin Peaks.

Based on the debut novel of Gillian Flynn (of Gone Girl fame), this is set in the small town of Wind Gap in Missouri. It's Deep South backwards territory - similar in bleak tone to that of True Detective. The small town has an imposing eerie woods, missing girl children with missing teeth, boy children with shotguns, ice tea with a bit of something extra in it, and folks who do not want to divulge any of the town's dark secrets.

The casting directors worked magic. Like Big Little Lies, this is a story about women being told by talented female stars known for their award-winning roles on the screen. It also has the same director - Jean-Marc Vallee.

WATCH | The trailer for Sharp Objects

Amy Adams is Camille Preaker, a journalist in St Louis who is sent by her editor to investigate the kidnapping and murder of two young girls. The tragedy happened in her home town, from which she eventually ran away. Camille is heavy with the weight of their deaths and those in her past.

Her mom Adora is played by the distinguished Patricia Clarkson. She is the quintessential melodramatic Southern woman whose neat figure and perfectly made-up face are ensconced in floaty pastel satins and silks and old-fashioned church hats. She is all about appearances and is cold and cutting towards Camille, whose reappearance upends Adora's life. Is Adora toxic or merely misunderstood?

Sophia Lillis is Camille's younger self. If you wonder why she looks familiar (not only because she looks strikingly similar to Adams) she was superb as Beverly Marsh in the recent version of Stephen King's IT. Lillis shows Camille's happy side, eroded later by psychological pain.

There is something sinister afoot in Wind Gap. Its denizens are keepers of secrets and will use any means to hide their darkness, the monsters in their beds.

Camille decants vodka into water bottles and keeps a sewing needle in her car as an instrument for self-harm. Adora dresses her teenage daughter Amma (Eliza Scanlen) in cutesy print dresses and demure plaited braids.

Outside their cloistered Victorian home, Amma rebels in roller-skates and cut-off jeans, stealing vodka with her friends. The eager to please and seemingly ignorant stepfather Alan (Henry Czerny) sits in the lounge blocking out all unpleasantness with state-of-the-art headphones connected to an impressive sound system.

As the plot moves beyond Margaret Atwood's original book, this dystopian drama proves that it still has plenty to say about pertinent issues in ...
Lifestyle
4 years ago

There are no duelling banjos but the opening credits of the first episode set the macabre, dreamlike quality of the show, with The Dance by Frank Waxman setting a creepy tone in relation to the images of a town that seems almost abandoned. Camille's escape is Led Zeppelin music from a cracked iPhone.

Then there is Chris Messina, who plays Richard Willis. He is the outsider looking in; the cop who wants to find the murderer. He was called in by the sheriff to help with the first murder and kidnapping. Like Camille, he is trying to find answers. There is talk of it being the Woman in White - similar to the Green-Eared Spaghetti Monster in True Detective.

As in Twin Peaks, there seems to be no urgency to find the murderer. Rather the point is to unravel the mysteries of the town, the strangeness of the people, the dreams that become nightmares and the drinking and self-harming. The message is, however, very clear: don't underestimate women.

'The Alienist': period psychological thriller leans towards the predictable

Despite a talented cast and production team, 'The Alienist' adds little new to the serial-killer-hunting genre despite being set in the Victorian era
Lifestyle
4 years ago

Fans of the legendary artist Pablo Picasso, Antonio Banderas or modern history are sure to be absorbed by this 10-part series, writes Claire Keeton
Lifestyle
4 years ago

Series Review: 'Looming Tower' is a dramatic chronicling of 9/11

Adapted from a Pulitzer Prize-winning nonfiction tome, this 10-part political drama traces US failure in the events leading up to the 9/11 attacks
Lifestyle
4 years ago