Irrepressible filmmaker Leon Schuster is back with a new film, 'Frank & Fearless'. Older and wiser, this time he's playing to the audience's emotions rather than playing for laughs 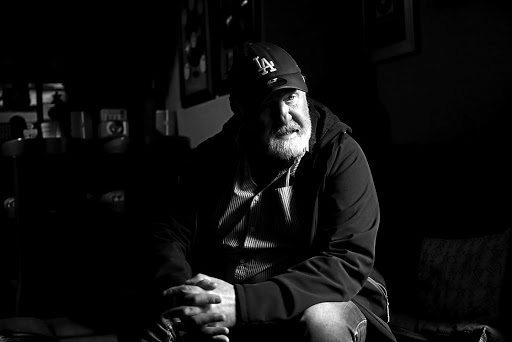 Leon Schuster, the South African filmmaker, comedian, actor, presenter and singer, at his home in Johannesburg. He says he will no longer appear in blackface in his films, to avoid offending black fans.
Image: Alon Skuy

He's been making fools of South Africans for more than 30 years and it's starting to show. Like a boxer in the 12th round who's taken one too many beatings but won't stop until he's been knocked out, Leon Schuster refuses to give up. At 67, he has no desire to tap out of the entertainment industry.

Having been at the wrong end of fists and slaps since before democracy, he said everything he does is "for the love of the game". It's this love that brings him back to the big screen this year, sans blackface, prosthetic masks or his tagline: "You've been schuks'd."

With his new offering, Frank & Fearless, Schuster hopes to get every auntie reaching for her tissues as he tackles rhino poaching.

This film, directed by Schuster's long-term collaborator Gray Hofmeyr, has been a long time in the making. Thirteen drafts and three years since he started work on it, Schuster admits he's nervous, so much so that he's on his 10th cup of coffee of the day and Friday afternoon traffic hasn't even started.

Khanyi Mbau is set to add to her acting resume with a role on an upcoming film from Leon Schuster centered around the scourge of rhino poaching in ...
TshisaLIVE
4 years ago

"I don't sleep," he said. "Last night I had one hour of sleep. But this is also because of my nerves about what we are going to do here. I'm so used to doing candid camera. Those films are easy because you describe a gag and there's no narrative, no storytelling, it's just gag after gag. I haven't made many narrative movies."

At first glance, Schuster's almost unrecognisable. He hasn't aged like fine wine in the usual sense, rather like grapes put through an intense pigéage session, being stomped underfoot until the juice runs out. But the end product is still wine, and vintage Schuster is still Schuster.

Women are impressed by scars and Schuster likes to show his off. Like a schoolboy at a show-and-tell session, his eyes light up as he talks about his injuries.

During the making of his 2004 film, Oh Schuks ... I'm Gatvol, Schuster had a vision of his dead grandfather when he was knocked out by one of his unsuspecting victims. He tells the story with pride.

I thought that if I made more candid-camera movies, my epitaph on my tombstone would read: 'Schuster couldn't take the last klap'

"That ou that moered me with the right fist. Klapped me right here. I was unconscious. I was lying against the wheel of the 4x4 and I heard birds chirping and tweeting above my head. I saw the image of my grandfather who died many years ago. That was a horrible experience. Then when I woke up, my heart went out to this poor guy who hit me. He felt so bad he bought me cigarettes and chocolates and a Coke.

"I thought that if I made more candid-camera movies, my epitaph on my tombstone would read: 'Schuster couldn't take the last klap.'"

Name an ailment, he's got it. Pick a body part, he's injured it. But he's also got the trophies and accolades to show for it.

Schuster's bar is not stocked with the finest whiskies or brandies, as one might expect. There is, in fact, no alcohol in immediate evidence. Instead, the shelves are full of awards won during his long career. If he has any celebratory elixirs, they are well hidden.

His TV room is stuffed with video tapes, vinyl records and a few children's films on DVD. He keeps these because they were some of his own kids' favourite childhood films.

The movie collection on display is as diverse as his fans. His ability to appeal to such a wide cross-section of the population is the factor to which Schuster attributes his huge success. This wide reach is "my good fortune", he said.

Any Schuster film does well at the box office. Over the years his movies have frequently been the only local entry on SA's box office top 20 list, slotted between Hollywood blockbusters such as Fifty Shades of Grey or the Fast & Furious franchise.

The gross amount made by Leon Schuster's last film, 'Schuks! Pay Back the Money'.

It was the only local production among the top-earning 25 films released in SA in 2015.

But while South Africans rush to watch every Schuster film, he stays away from the cinema. "I never go and watch any of my movies once they are released. You won't find one movie of mine on my shelf. I've seen it, I've done it; I've worked my gat off, so why am I going to watch it again?"

He particularly loves Sweet 'n Short because it was just before the dawn of a new era in SA and he felt that with the film he "predicted what we felt the new SA would be like. We were quite on the spot there, and that's what got to the audience."

But despite having created and arguably perfected the local candid-camera recipe, the father of blackface isn't proud of all his films.

"I've got two movies that I wasn't very happy with. One of them is You Must Be Joking Too!. I wrote a story and at the time I knew nothing about storytelling. And the gags weren't that good. Then there was Mad Buddies, which could've been a much better movie but we were under tremendous pressure because of budget."

Schuster is unapologetic about playing on every racial stereotype in his films. He does have some regrets about having profited from blackface, but mostly because he has been called out so severely on this. He still longs to make Mama Jack 2, but has accepted that he cannot don the racial-trope mask again.

He said he had received many messages from fans begging him never to do it again. He will respect their wishes and agrees with their objections, but it bothers him that he can't make the films he'd like to.

"I'm so sorry that I can't make Mama Jack 2. If I had a dream come true, my next movie would be Mama Jack 2. But especially on Twitter they said stay away from the blackface, it's not on. It was black people talking to me and you've got to listen. I can't do it because I'll be heavily criticised. In the olden days it troubled nobody. But I won't go blackface now, I can't do it. There's not one actor in the world that will. It's just racist."

He may have heeded the call of black fans, but Cape coloureds are still fair game because he thinks he can continue to get away with playing on this particular racial stereotype. "Cape coloureds have got a very, very good sense of humour," is how he justifies making fun of this group.

"The way they speak, the way they sing . They've just got a fantastic sense of humour. I've never had a coloured guy who turned around and said: 'You're not going to use me.' I used them for their colourful language. That's the reason. They speak an Afrikaans which is soos 'n engel wat op my oor piepie [like an angel peeing on my ear]. I love the coloureds."

If he had to name a favourite movie, Schuster said he'd pick the latest one, Frank & Fearless. It will be released in South African cinemas in time for the festive season. This is the film that has him most excited because with it he feels he has finally moved away from his slapstick recipe and into the arena of serious narrative.

Comedians, your licence to offend has been revoked

Stand-up comics don't get a free pass in the age of 'wokeness'. Reckless commentary - even in jest - can have serious consequences, writes Siphiwe ...
Lifestyle
4 years ago

Success at the box office is not his holy grail. If he had to give the movie of his life a title, he said, he'd call it Humble Feelings. "I need to stand with my feet solidly on the ground. I don't dream about massive box offices and selling the movie overseas. If that happens, it happens, but I don't want to run in front of what's going to happen."

He's like a Muhammad Ali of the film industry, perhaps ageing prematurely because he's too brave to quit. Either way, Schuster isn't going anywhere.

• 'Frank & Fearless', Schuster's new movie, will be in cinemas on November 23.

Schuster films are synonymous with December. If he's not releasing a new film there will be endless reruns of old ones every festive season.

This accounts for Schuster's high visibility as a celebrity - wherever he goes he is mobbed by fans wanting the mandatory selfie with him.

He usually has no qualms about posing with fans, except when his mother is with him.

"I was in Bloemfontein and these women all crowded around, there were about 11 of them and they all wanted a photograph with me. I had my poor old mother (she's 96) with me because I had treated her for breakfast. My mom doesn't really care what she says. She told them: 'This is enough bloody photographs. I've got to go home.'"