Dating horror stories: if you don't laugh, you cry ... right?

Comedy of errors: finding the humour in bad dates and silly mistakes 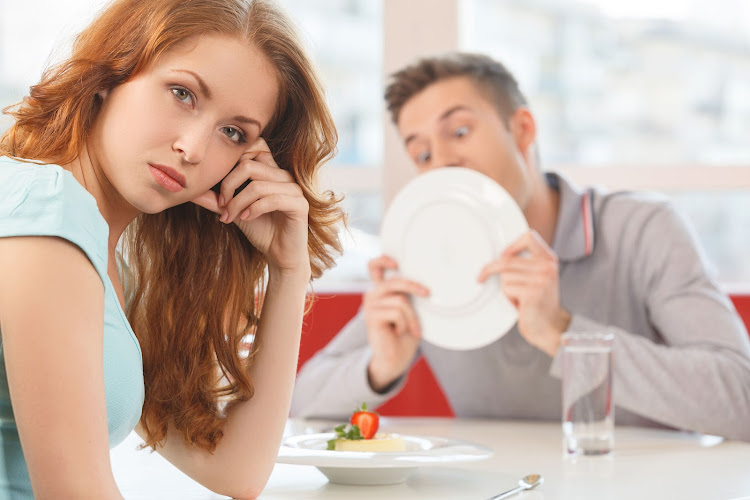 Yes it really happened: apparently some people aren't shy to lick their plates on a date.
Image: 123RF/blueskyimage

I don't know why I find dating disasters so funny. I'm either a psychopath, or there's nothing wrong with me and it's simple self-preservation. Like that thing where if you don't laugh, you ugly cry, then later eat a pizza, raw cookie dough, and a box of Ferrero Rochers.

And it's not just bad dates that crack me up. Hospitals, mortuaries and other sensitive situations make me giggle inappropriately too. I Googled it to see if it's a common phenomenon and Google suggested I'm either a sadist or have Schadenfreude.

I don't think it's sadism, that's someone who likes inflicting pain on others, and other than making you read this column, I don't really do that. And if that's the case and you're reading this now, then you're a masochist, so we're even.

Schadenfreude is billed as that feeling of joy some people get when they see others fail or get hurt. And you don't have to be German to get it, so, I probably have that.

The reason this was on my mind was because I came across an article on Vice recently. Vice is a Canadian-American mag and website of popular art, culture and interesting bits of news. They are also regularly Not Safe For Work, which is an attribute I look out for in all my serious news sources.

In this particular Vice piece, talented Vice journalist Anna Goldfarb asked a bunch of people to tell her the dumbest ways they've ever hurt themselves, in six words.

Thirty-four-year-old Rachael, "Fell from a hammock. Broke ankle." Talk about setting the bar low. It's such a crushingly huge injury from such a devastatingly low height. It plays out in my mind like those Acme hammocks from the Road Runner. Did it spin and spin before catapulting Rachael through the air? Aren't hammocks usually set on sand or grass?

Ben is a champ. He "cut penis, while trimming pubic hair". Oh Ben, I feel your pain. Well, not technically.

"Severed fingertip while printing school assignment"; "Slipped on ice imitating a penguin"; "Choked on candy at the opera"; "Poked my throat playing a violin."

These made me laugh too loudly in a library. Maybe it's so funny to me because I recognise myself in the carnage. I'm the guy who will drop a can of beans on my foot, and pour the boiling water from the kettle over my hand instead of into the hot-water bottle. I swear more in the kitchen than in any other room of my home.

Are these really the very best pictures - and bios - of men offering themselves for dates online, asks Paige Nick
Lifestyle
3 years ago

So, I thought, why not apply Anna Goldfarb's construct to another disastrous room in my life, my dating archives:

"He had a large doll collection."

"Had no job, and missing teeth."

"Vomited on me on New Year's."

Okay, I've got to admit, they're not as funny when they're your own stories.

Masochist I clearly am, I went back to Google, and shouldn't have been surprised to discover that Anna Goldfarb got there before me. Over a year ago, she asked her friends for their nightmare dates in six words.

"He pooped himself before dinner arrived." - Roxy, 35

"He talked about clipping his toenails." - Amanda, 39

Mine were just sad, but those are hilarious.

There are over 7-billion people in the world, but we each have just one soulmate. Something just doesn't add up
Lifestyle
3 years ago