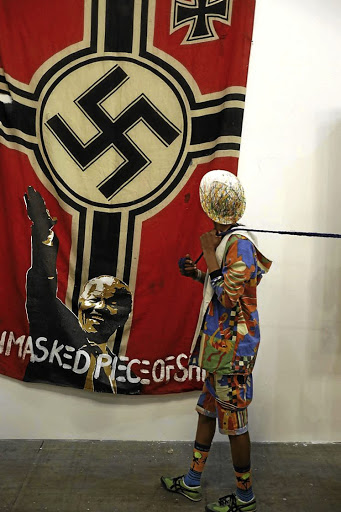 Controversial visual artist Ayanda Mabulu has once again caused a stir at this year's FNB Art Fair. His work was removed because it was deemed offensive.

His latest work, with a Nazi swastika image super-imposed on Nelson Mandela's picture, has left a bitter taste in the mouths of art lovers who asked for it to be taken down.

The FNB Art Fair started on Thursday and ended on Sunday at the Sandton Convention Centre in Johannesburg.

According to FNB Art Fair organisers, Mabulu came to the fair and took out a Nazi flag as if he was doing performance art. He hung it at Kalashnikovv Gallery, a gallery that represents him at the fair.

In a dramatic situation, the flag was hung and taken down twice on Saturday.

The Kalashnikovv Gallery co-owner MJ Turpin confirmed that Mabulu's work was removed because it was regarded as insensitive.

Ayanda Mabulu, the artist known for his often-shocking works of fornicating politicians, moves from the phallic to the fascist in his new show ...
Lifestyle
2 years ago
Next Article