'Narcos: Mexico' is a riveting look at the roots of the Mexican drug trade

The addictive fourth season of 'Narcos' focuses on the rise of Mexico's most notorious drug dealer. Actor Diego Luna, who'll be playing the Guadalajara Cartel boss, tells us more 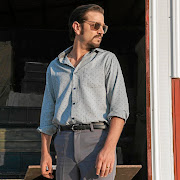 Understanding the mind of one of the world's most notorious drug kingpins and recreating his rise and fall is no easy feat, especially when the man you are portraying is alive today and the extent of his interaction with Mexico's dark criminal underworld remains vague.

The story of one-time Guadalajara cartel boss Miguel Angel Felix Gallardo - still serving his 37-year sentence in a Mexican prison - will come to television screens across the world when Netflix releases the fourth instalment of the critically-acclaimed Narcos series this month.

For Hollywood A-lister Diego Luna, it was no easy decision to play the man nicknamed "El Padrino" (The Godfather).

Speaking to the Sunday Times, Luna - who you may remember as the cool-headed Rebel leader Cassian Andor in Rogue One: A Star Wars Story - says the story of Narcos: Mexico provides context to the ongoing drug wars in Mexico today.

"I was very excited to tell the story that has so much to do with what we're living today. Understanding what happened in the '80s in Mexico can help us understand our present and hopefully what it holds for our future."

But before the turmoil, there was Gallardo.

"This guy, he seemed always to be one step ahead of everyone. He created a whole structure that sounded impossible back then. He had this ability to sit everyone around a table and build something that was pretty amazing for the world of drug dealers. He managed to make them work together," Luna says.

"I read a lot in articles that he was seen as a businessman, that he understood the codes of business and he understood the idea of being discreet as something valuable in this world. He used to be a consultant for a band. He was very active; he wasn't the guy hiding in the mountains."

Gallardo's Guadalajara cartel united dealers across Mexico to form the largest drug syndicate in the country's history, initially shipping heroin and marijuana to the US before joining with Pablo Escobar's cocaine enterprise.

"It's a time of history that is pretty well-documented. I basically used all of that as my research: books, documentary films and many journalistic pieces that talk to you about this … Every character is a human being and there is so much you can relate to. The same thing that triggers your decisions would trigger his: love, friendship, fear and jealousy. It's just that he's willing to cross a line that I'm not," says Luna.

"For people that don't know Mexico, it's good to hear these stories because it is still happening to us. There is a violence going on in Mexico that we are all part of somehow.

"It took me time to decide on doing this. I had to think a lot about it. I decided it was better to be a part of it than not. It is still a difficult decision, I have to admit."

Spoiler alert: Gallardo was arrested in 1989 following the death of US Drug Enforcement Administration agent Enrique Camarena, whose trajectory is also explored in the series. Camarena is played by Michael Pena.

The series goes back to the beginning, when cartel bosses flaunted their diamond-clad lifestyles while lining the pockets of politicians and authorities

Narcos: Mexico dives directly into the belly of the beast that is Mexico's drug trade: a world stained red with the spilt blood of soldiers, citizens and drug runners. The series goes back to the beginning, when cartel bosses flaunted their diamond-clad lifestyles while lining the pockets of politicians and authorities.

It is both riveting and saddening, the contrast lying in a series that keeps the viewer on the edge of their seat through a fast-paced, emotional telling of the lives of both Mexico's most notorious drug dealer and the man who brought his enterprise to its knees, while drawing attention to the carnage that ensnared Mexico as a result.

"I think there's many stories we need to tell about my country. I wanted to make sure we do it right, with respect, with the conviction of actually contributing to a debate which needs to happen, and not to glorify the life of these characters," Luna concludes.

• Narcos: Mexico will be available on Netflix on November 16.