We celebrate talented South Africans who flew our flag high as they dominated in their fields, both locally and abroad

The year might have started on a sour note for Nakhane – think the drama around the movie Inxeba (The Wound) – but the multitalented artist has soared since then. He moved to London and signed with the American agency that represents Terry Pheto internationally, as well as with a UK-based one.

He released his second studio album You Will Not Die and was nominated for the Best Breakthrough Act of 2018 at the Q Awards in London. He closed off 2018 with an appearance in a Vogue UK January edition feature about the visibility of the LGBTQ + community in pop music. Talk about a year!

Internationally, she was named one of the top 100 chefs in the world at the 2018 Best Chef Awards in Milan and Restaurant Mosaic got the 2019 La Liste Award for the Best Hotel Wine List in the World. Better book your table quickly!

In July, Lungi Mchunu joined an expedition to the Arctic and became the first African woman to sail to the North Pole. The 34-year-old’s professional background is in banking but, after taking up sailing in 2016, she's already achieving what most people can only ever dream of.

Mchunu can also add photographer and documentarian to her resume - Canon sponsored her with equipment to capture the perils of climate change as experienced during her trip.

Nelson Makamo has long made his mark on the South African art scene and even had a solo exhibition in London last year. Twenty eighteen turned out to be another success story in this local’s artist’s illustrious career. He was one of 25 artists from around the world chosen as finalists for the 2018 Rise Art Prize. He went on to win the Drawing Award.

In December, during the Global Citizen Festival, Makomo played host to celebrities such as Oprah Winfrey, Gayle King, and Ava DuVernay. He brought Kelly Rowland to tears when he gave her a painting of her son. And Oprah bought his painting titled Naledi. Talk about a star! 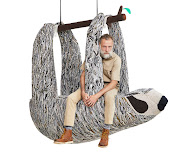 Image: Antonia Steyn for Southern Guild and SFA Advisory Designer Porky Hefer in one of his 'Endangered' pod seats.

Porky Hefer’s designs are both evocative and functional. This can be seen in the range he created for the Leonardo DiCaprio Foundation launched at Design Miami/Basel in June called Endangered. It brought focus to species classified as vulnerable or endangered by the World Wildlife Fund through cuddly lounge chairs shaped like creatures such as polar bears and sharks.

He has now lent his skills as a vernacular architect to the design of the hotel The Nest @Sossus in Nambia, which was featured in the prestigious design magazine, Wallpaper.

“Beyoncé performed on stage in one of our outfits.” That is a line that Quiteria Kekana and George Malelu of Quiteria & George can say without being accused of being dreamers. Queen B rocked one of the fashion design duo’s numbers while performing at the Global Citizen Festival. Talk about a stamp of approval.

The photographer started off his year by capturing the fashionable revellers at Afropunk Fest Johannesburg for British Vogue.

The publication later commissioned him to photograph the street style at Arise Fashion Week in Nigeria. Naomi Campbell also commissioned pictures from Stuurman. A few months later, Ciara asked him to style her music video for Freak Me, alongside Rich Mnisi.

This is not to mention his local feature on the cover of GQ Style magazine or his partnership with Absolut Vodka to create limited-edition bottle designs during the One Source Live festival, celebrating African creativity. He was also named an Image Maker of 2018 by Marie Claire.