SA's multicultural society: whose manners are the right ones?

And, if we don't agree with the answer, is it rude to say so? 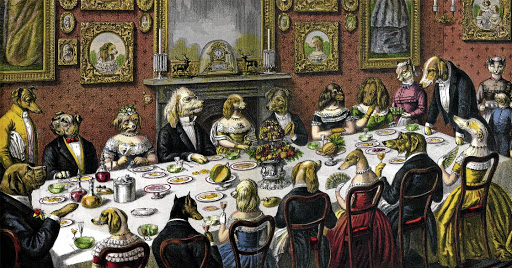 Manners maketh man. Are we sure about that? After all, the country that gave us that saying gave us Geordie Shore and became world champions of the terribly unmannerly practice of colonialism. Besides, what's the point of being able to "properly" arrange cutlery at a dinner table?

The Collins dictionary defines etiquette as: "The customs or rules governing behaviour regarded as correct or acceptable in social or official life."

Among animals manners are a crucial survival tool. A bear with bad manners is essentially asking for a fight.

Being gregarious animals, it's easy to see how our ancestors developed bits and bobs of etiquette to foster social harmony and keep random acts of carnage to a minimum.

So how did some fairly common-sense survival techniques develop into a dinner-time thicket in which using or not using your hands can cause a minor scandal? Whose manners are even the right ones and if we don't agree with the answer, is it rude to say so?

Manners are weird, complex and some would say exclusionary. In a multicultural society the question of etiquette can add layers of friction to the "understanding one another" equation. A common example is when kids from different cultures visit one another and create amusing tense situations.

Good manners are not all about pompous rules and classism. They govern how we treat one another and if used correctly may be the social lubricant we need to get along in these increasingly fractious times.

While the rules we judge each other by may have originally been designed to ensure that our ancestors didn't unnecessarily bludgeon each other to death, etiquette, across cultures, has evolved into complex social rituals that can affect everything from your relationship with your mother-in-law to your ability to get a job.

Research by British cross-cultural communication firm Commisceo has found for instance that job interviews, especially in multicultural environments, are areas where differences in what is considered polite can lead to discrimination. In an article on their website the company noted how things like eye contact or name dropping can be construed very differently depending on who is on opposite sides of the table.

"To speak loudly and clearly may be construed to be a positive trait in the UK but in many other countries, such as Malaysia, they believe speaking softly is a good trait," the company reported.

Similarly Commisceo reports that while many cultures in Europe, North America and Asia view punctuality as being next to godliness, a lot of other cultures do not engage in the same type of clock worship, thus opening the door for a cacophony of misplaced indignations.

In the year of our Lord 2019, manners have become a densely populated minefield. In SA "good manners" have been the rickety stage upon which many a well-meaning actor has broken a leg.

The social heebie jeebies derived from asking personal questions, for example, is largely a European import that is now de rigueur.  In an office setting, for example, that means talking about salaries is a big etiquette no-no. So much so that some companies explicitly forbid it. This little piece of good manners often ends up perpetuating unequal pay structures because everyone is floating around in the dark and assuming that the people doing the same job as they are must be getting paid just as much or as little.

"When salaries are public knowledge, employees tend to be paid more fairly, stick around longer and trust the leadership more," explained Denise Rousseau, a professor of organisational behaviour and public policy in a 2018 Huffington Post article.

In an interpersonal setting this can also lead to murky territory. As a child I was required to address adults with some level of formality regardless off what our relationship was. My parents' friends were Aunty/Uncle whomever. A stranger in the street was Bhut' so and so or Sis' smangmang. Not using a title when addressing my elders was (and still is) considered a high-key insult.

Thus, my world was rocked when one day a good (white) friend of mine named Chad* came for a sleepover and used my mom's first name like they were friends. Imagine! Once he left my sister and I convened an emergency meeting to discuss the feasibility of using our mother's first name when speaking to her. We decided against it, citing safety issues.

To make matters worse, when I went to Chad's house his mother insisted I use her first name and only her first name when speaking to her. Being well raised I couldn't in good conscience insult an elder like that so whenever I wanted to speak to her I would address my statement to the room and hope she would be among those to reply.

Later in his life Chad would endear himself to my parents by being among the few white kids polite enough to not refuse food he was offered, even if he didn't like it. My own good manners meant that I would also power through bland Italian dishes with cheerful determination. Thus soldiering through unpleasant food may have been the one bit of good manners that helped solidify the bond between Chad and I.

Jet-iquette: how NOT to be an annoying plane passenger

No-one wants to hear your iPad, or touch your elbows, or smell your feet, writes Anna Hart
Lifestyle
2 years ago

There is a mildly bleak conclusion to this facetious cluster of etiquette errors from my childhood. When my mother eventually got used to non-black children (black kids were expected to be raised "better") being on a first-name basis with her, Chad's mother probably never had to go through the opposite experience for the sake of someone else's comfort.

This was through no fault of her own but it does seemingly set up an implicit hierarchy of manners. One in which a certain group's values are respected and adhered to more than the other's. The Anglo-European code of etiquette seems to have become the manners lingua franca with other ideas of "correct" behaviour relegated to situations where all parties speak that particular behavioural language.

However, this doesn't have to be the story in which our hero, Captain Etiquette, becomes a tyrant and forces us to behave like the descendants of people who wore top hats. The entire point of etiquette is to foster smooth social relations between people, and manners, like cultures, change.

In a country with many distinct cultural groups perhaps it is time to put etiquette back to its original use: creating social cohesion instead of stratification. So instead of turning your nose up at someone because they do a certain thing a certain way or just plain ignoring it and doing things your own way, take a moment and ask why.

If you see people of a certain group behaving a certain way maybe gather some information around the reasoning and mimic them. Obviously you do not need to compromise yourself and whatever your value system may be but if some people don't do the whole "look me in the eye" thing then maybe take that on board before you decide that they are shifty looking.

Whether we like it or not, all of us are stuck together for the time being. Perhaps we could go back to the good old days when all the members of our homogenous communities knew and followed the rules of behavioural engagement. Fortunately, for people who like human rights, we can't, which means we need a new set of behaviours to govern our new world. Perhaps this is all Mandela-esque pie in the sky thinking, but I have faith in you SA. Good luck.

A BRIEF HISTORY OF ETIQUETTE

Etiquette is defined as a set of customs and rules for polite behaviour, especially among a particular class of people or in a particular profession. At its best it lubricates the wheels of social interaction with others: we know what is expected of us, when.

Polished manners are an equaliser. Etiquette and manners are born out of consideration for others: making a point of speaking to the person on either side of you at a dinner table (and appearing to find them interesting even if they are not) is simply good manners. Writing a thank-you letter or e-mail to the hosts the next day is courtesy. And you’ll likely be invited back.

At its worst, etiquette is highly exclusionary

At its worst, etiquette is highly exclusionary, such as when aristocratic writer Nancy Mitford set out the secret rules of society in 1954 in an essay titled The English Aristocracy. Using the “U and Non-U” (upper class and non-upper-class) terms coined by a linguistics professor, it listed the arcane class indicators the elite used to distinguish themselves from the dread middle classes. The greatest insult was to be seen as “common”.

So “pudding ” is U, “dessert ” is Non-U, “napkin” is U, “serviette ” is Non-U. Don’t ask to use the toilet in a posh house: it has to be the lavatory, and a posh woman wears scent, not perfume. Use the word “mirror ” in those days instead of “looking glass” and you’d be clocked as a rube.

Much Western etiquette has its roots in ancient history. For instance, it may simply be seen as hygienic to cover one’s mouth when yawning. In fact, centuries ago, yawns were thought to be the soul leaving the body, allowing evil spirits to enter, so covering the mouth kept the soul inside.

Shaking hands in greeting was a means of establishing that neither party was armed, and the custom of a woman walking on a man’s right came about because his sword was sheathed on his left and therefore dangerous to her. Tipping one’s hat comes from the days of knights flipping up their visors as how of friendliness and trust.

Saying “Bless you” when someone sneezes hails from Pope Gregory 1, who commanded that anyone who sneezed should be blessed lest they had contracted the plague. Which brings us to “sick”. “Ill ”was Non-U, said Mitford. Sick was correct. One wonders what she would have thought of the current usage of the word. - Michele Magwood