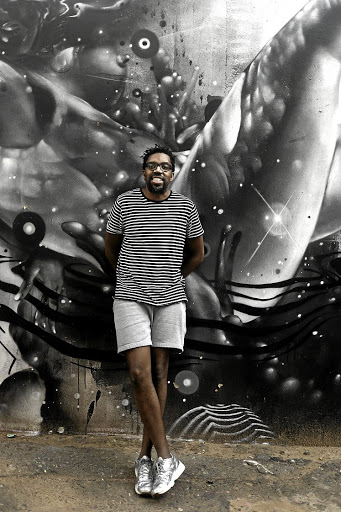 The offices of Diprente Films are in Johannesburg's epicentre of swag, Braamfontein. At the top of a flight of steps, Diprente's headman, Kagiso Lediga, is wearing his signature surprised expression and "I just threw it on" ensemble, but beneath his chilled exterior is a tension that speaks of looming deadlines.

The 40-year-old producer, director, writer, comedian and actor politely slides his work devices away but keeps one eye on his laptop and the stream of notifications lighting up his phone. Some of these have to do with Matwetwe, a film dear to his heart that is now playing on the big screen in SA.

Matwetwe, written, directed and produced by Lediga, is a comedy set in his hometown, Atteridgeville. It tickled critics at film festivals in the Netherlands and South Korea long before it opened in South African cinemas, where it has been making locals laugh for the past fortnight.

The film has been in his story bank for almost as long as SA has been a democracy.

"I wrote Matwetwe when I was a student," says Lediga. "I think it was in my first year, when I had just discovered weed at the University of Cape Town. I thought of a cool coming-of-age story that would happen in Atteridgeville and had weed involved. It evolved into what you see on screen now."

Filming began in December 2016, at the same time that Lediga was wrapping up Catching Feelings, his directorial debut, which last year became the first African feature film to be picked up by Netflix.

Lediga has had a number of firsts in the local entertainment industry. As a dreadlocked dreamer in his 20s, he put in what he calls the "10,000 hours" that formed the bedrock of his later career.

That foundation was PMS, as those involved with it liked to call the Pure Monate Show, which was simultaneously ahead of its time and broadcast at just the right time, and which changed the comedy landscape in SA.

Lediga made the SABC sketch show precisely because it was something no-one else was doing.

"It was my first time producing; I was 24 and it was quite stressful," he says. "The show was like film school, not just for me but for some of the production designers, directors, cinematographers and others who worked on it.

"Most importantly, it was a great launch pad for a lot of comedians and the type of South African stand-up comedy that exists now."

Several television series and a few stand-up comedy gigs later, Lediga graduated to Late Night News, which he created with comedian Loyiso Gola. The satirical series, which first aired in 2010, was anchored by Gola and featured fellow comedians including David Kibuuka and Chester Missing. The show was nominated for two international Emmy Awards but was cancelled in 2015.

Lediga went on to create The Bantu Hour, which aired in November 2015 and which Lediga co-hosted with the late Hugh Masekela. The duo hosted two seasons of the live show, which combined satirical comedy sketches, live musical performances and stand-up comedy.

Throughout his career Lediga has had the Nike approach ("just do it") to any project he takes on. He regards PMS, LNN and The Bantu Hour as career highlights, always pointing out that in each case he worked with a trusted team to break new ground and used the shows to provide young and emerging talent with a platform and creative outlet. They also broadened the scope of entertainment in SA.

"Before Late Night News, people were doing a certain thing, so we made the other thing and then people asked, 'What is this?' and then it became the norm. Even the way news was told after that show was different. News tried to be funny and smarter in a way."

Having conquered local broadcasting, Lediga has his sights set on world domination, starting with Queen Sono, which will be Africa's first Netflix original series. It stars actress Pearl Thusi and Lediga is extremely excited about it.

Lediga has his sights set on world domination, starting with 'Queen Sono', which will be Africa's first Netflix original series

"Netflix is a big corporation that's taken over the world and they're coming to Africa," he says. "For them to think that we, our team, are the perfect people to partner with in this territory is great.

"I've been working with more or less the same people for many years so it's good for all of us to graduate together. We've written for SABC, M-Net, e.tv ... The next frontier is Netflix."

Soon more posters will join the reminders of other films he's worked on in various capacities. A Blitzpatrollie poster is up on the wall near one for Bunny Chow, which he says always reminds him about relying on the power of instinct.

"Bunny Chow was great," he says. "One of the things I learnt from [director] John Barker was the instinctive way to make film. He goes, 'Let's shoot this thing!' and then we go."

Queen Sono was created with Pearl Thusi in mind.
TshisaLIVE
3 years ago

He adopted this same attitude when making Matwetwe in a limited time on a tight budget. The 2016 Barker-directed film, Wonderboy for President, which saw Lediga's face on spoof presidential-campaign T-shirts all over SA, took five years to complete because of financial constraints.

By the time Lediga was ready to film Matwetwe, he and his partners - including co-producer Tamsin Andersson - had found the industry cheat-code to filming on a budget. That was to shoot in December, when most companies were closed, equipment didn't cost as much to hire and crew were mostly not engaged elsewhere.

They went way over their R800,000 starting budget, spending a total of R2.2m. Emergency assistance appeared in the shape of South African musician Black Coffee, who was persuaded to come on board as an executive producer (in essence a fancy term for donor).

This happened when Matwetwe was roughly finished and was screening at a festival in Rotterdam.

"I had used one of Black Coffee's songs but we hadn't paid for it yet," says Lediga. "People picked up on Black Coffee's music in the movie and started tweeting - luckily in Dutch - about the great soundtrack.

"Then I saw that Coffee was performing in Rotterdam and I tried to call him to get tickets, not even thinking that I might get into trouble for using his music without being sure of the permissions.

"When I came home I thought I should speak to him, so I got him to watch the film first. We had a really cool funky cinema in Bryanston; he came with his wife and they really liked it. And I said: 'Can you help us with money to finish the film and also be presenting partner?' He said yes."

And so Matwetwe finally made it onto the local circuit.

WATCH | The trailer for 'Matwetwe (Wizard)'

"I really like this movie a lot," says Lediga. "There was a lot more instinct in it. It felt something like the Pure Monate Show, when I was very young and just starting out. This one was like that, not waiting for permission, not waiting for people to say this is how movies are made, it was just straight up, let's go!"

As he proved from the beginning, when PMS launched many of SA's stand-up comedians, Lediga has a gift for unearthing talent and putting artists on a platform that becomes their trampoline into the industry.

For Matwetwe, he chose actors from Atteridgeville and the greater Tshwane area, not just for budget reasons but for authenticity. Many of the cast in Matwetwe are first-time actors or those making their big-screen debut.

Lediga leads by example: "I will never have a problem with being first," he says. "I'm not first in the world, though, I'm just first in SA. But we are constantly competing to make a cool thing for the world. That's always been my thing, making cool things for the world from our South African perspective."

A START-UP IN STAND-UP

His current focus might be on movies and TV but comedy remains his first love, like that high school crush you drunk-dial when your current girlfriend isn't around. His stand-up comedy career started in 1998, when the few stages that existed for aspirant comics were open-mic sessions in the odd club or bar. He comes from the era when comedy wasn't a cool career path. Anyone following it had to lie to their parents, saying it was just a hobby.

Though our flourishing comedy industry today is something to celebrate, Lediga says he feels sorry for those doing stand-up now.

"For new guys there's a standard. There's Trevor Noah, who is one of the biggest comedians on the planet, so there's a benchmark. Then there are hundreds of you, so you've got to compete. When I was there, they needed you to come. If you didn't rock up the night was ruined. Now, if you don't rock up the show will go on."

He plans to return to stand-up comedy as soon as he's not chasing Netflix deadlines for Queen Sono. Stand-up is not something you can just do on the side, he says, it requires dedication and total attention.

"To make a good show you have to be focused on doing it consistently," he says. "I am a stand-up comic but right now I have a job. I can't just go and perform; I need to put everything aside and focus on stand-up. When I'm done with Queen Sono, I can focus on it for at least six months to a year. I'll be building a set [of comedy routines] which I've already started planning, but I'll need to consolidate it into a special.

"I put out a lot of movies, which is great, but I also need to put out stand-up shows. I've only done one comedy special. It takes focus and it takes time, which I hope to find next year."

Matwetwe, currently in SA cinemas, tells the story of two best friends who have just finished matric and have an unforgettable New Year’s Eve in Atteridgeville. Their adventures include scoring a huge deal, dodging a kingpin gangster and winning over a girl.

On Monday, Kagiso Lediga said that Matwetwe had grossed more than R2m in its first eight days in local cinemas.

“We reached around R900,000 in three days and it has just gotten stronger from there,” he said. “We are now over R2m. It reached that in eight days and we are happy because it took eight days to make the film. We are already blown away by the response from people.

“It has done so well. It has doubled its screens and I think there will be one or two more cinemas debuting this week. It is about taking the film to places like Witbank. It is doing well in Mafikeng and even in Botswana.”

Lediga ascribes this success to the film’s freshness and originality.

“I think there is a certain kind of authenticity around the film,” he said. “It’s not like something people have seen before. I think it was well executed and unique. It is really cool that this little experiment is really paying off.”  —Kyle Zeeman, TshisaLIVE

Kagiso Lediga's laid back attitude and trademark tee and pants have seen the comedian win over many fans and get dragged by others who have publicly ...
TshisaLIVE
3 years ago

As comfortable in front of the camera as he is behind it, Kagiso Lediga's many talents include writing and directing. Here's which shows he finds ...
Lifestyle
4 years ago