Gents, here's how to get a weekend pass from the wife 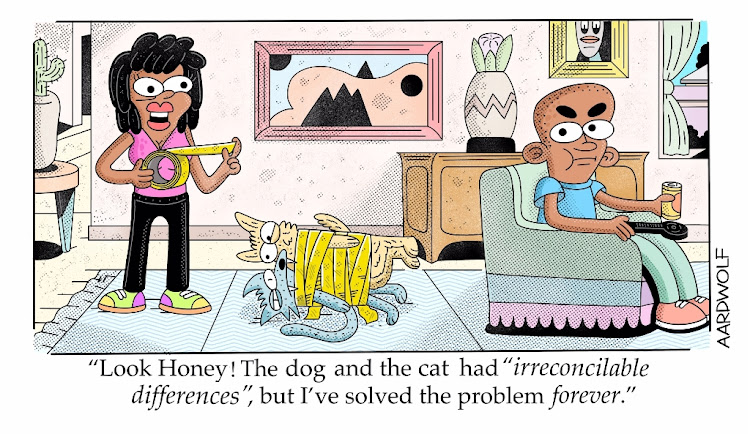 People assert that the greatest trick the devil pulled was convincing the world he didn't exist. That's a line from the 1995 movie The Usual Suspects, even though an increasing number of people believe it's a direct quote from the Bible. Fair enough.

I believe there must be a verse in the Bible stating that the greatest trick the devil ever pulled was to convince everyone that after they say "I do", they will go outside to play with their friends like before.

Or maybe I'm the only one who assumed that this Hollywood romcom script ends at the altar, credits rolling. And then I awoke to discover all my going-outside-to-play-with-my-friends privileges had been revoked.

There are few things more difficult than negotiating the delicate balance between time spent together as a couple and time spent pursuing individual interests.

Most of the time I leave the house to sit at a mate's house, watching Arsenal huff and puff towards winning their perennial Fourth Place trophy. This is usually followed by stupid, futile debates about such riveting subjects as the horsepower under the bonnet of the all-new G20-generation BMW 3-series.

Because my friends and I often lose our minds and agree to couples and family evenings together, the wives see us engaging in these brain-dead, pointless exercises which makes them question the value of letting us go anywhere at all.

And this, ladies and gentlemen, is how marriage is often nothing more than an MMA cage fight in which the wife's purpose is to try to keep the hubby inside the cage over weekends.

At the centre of this noble pursuit of keeping this tiger in the cage for family cohesion purposes is a trick I have christened the Male Fuzzy Brain method. Males are only capable of listening to stories with a limited scope of themes. If a story falls outside the Chiefs-Pirates/ Man City-United/ Stormers-Bulls/ Juju-Mbalula/ RET-WMC binaries, we tend to not be keen on hearing it.

It doesn't help that, after only three years of marriage, both spouses have heard every story at least 17 times. I find that women can suffer through the 18th telling of the story quite attentively.

Not so much the other way. We stare at one spot with glazed eyes, intermittently nodding and grunting; "Mmm". Inexperienced women will stop mid-sentence and hiss: "You're not listening to me!" The immediate answer is always an indignant: "Of course I am!" To which the amateur will respond: "What was I saying?", which leads to a heated debate. A veteran partner will know we're not listening but continue anyway. And then at the end: "Okay, so you're cool with that?", to which we will nod vigorously: "Yeah, yeah, sure."

Fast forward to Saturday morning and as he grabs his golf clubs she casually says: "Remember that we're leaving at 12, okay. Oh, and grab some Peaceful Sleep on your way back. Apparently the mosquitoes at that place are savage." Not only does he have no idea where "that place" is, he has no clue who else is going or when he agreed to this.

Later that evening, as he stands atop a koppie, viewing a herd of African buffalo at a Limpopo game lodge while internally bemoaning missing the FA Cup final, he has no idea what hit him. But more importantly, peace descends upon the household. This trick is employed to great effect to get would-be house escapees to ferry the children to and from the ice rink, "volunteering" to coach under-13 football at the school and sleepovers in Hartbeespoort.

I have a friend who is new in this game. After being denied a weekend pass to a friend's party in Piet Retief, he called me to bitch. After the obligatory commiserations I asked him what his response had been. "You're not my mother, you know?" had been his reply, apparently. I was mortified!

So, as a veteran in the game, I decided to take him under my wing. The trick, I schooled him, is not to hate the game but to excel at it. One of the tricks of the game is to negotiate standing weekly commitments. But it has to be sacrosanct. No exceptions. You cannot go 23 weekends in a row and then stay home on the 24th weekend. That opens the door to flexibility.

I have a friend who negotiated Friday evenings as his poker nights. On the Friday nights that the fellows are not available, he will still leave the house promptly at 6pm and find something else to do.

I have also left the house despite the gathering clouds. I really should have just gone back home but I was too belligerent. At some point the heavens opened up so much I had to seek shelter under a bridge. It was raining so hard I started hallucinating that the Lord was speaking to me and instructing me to build an Ark to house his creatures. But I made my point.

Why I'm keeping my new nyama-free lifestyle a secret

'We were beaten and we turned out just fine,' argue adults in favour of corporal punishment — but did we really?
Lifestyle
2 years ago

In praise of the kasie heckler

The township comedian is the precursor of the David Kau, Kagiso Lediga, Trevor Noah and Skhumba Hlophe era of paid comedy
Lifestyle
2 years ago