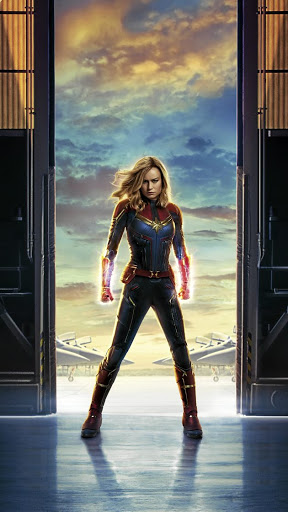 And so it begins. With the Oscars done, it's time to get back to blockbusters, superheroes and live-action remakes of all the Disney animated classics. First up is directors Anna Boden and Ryan Fleck's introduction of a new character into the Marvel Cinematic Universe, which has been hyped because of its female focus, '90s setting and its use of de-ageing technology to give us a Samuel L Jackson straight out of 1998's The Negotiator.

What the film turns out to be, though, is a slight, thankfully shorter than expected, adequately executed franchise entry that seems to serve as more of a prequel to the upcoming Avengers: Endgame than anything else.

In a galaxy far, far away, on the planet Hala, Vers (Brie Larson) is a warrior fighting for the superior race of beings known as the Kree. Endowed with super hands of fire, Vers, under the tutelage of fellow warrior Yon-Rogg (Jude Law), is part of a crack team deployed by the Kree's leader, the Supreme Intelligence (Annette Bening) in the war against their shape-shifting nemeses the Skrulls, a race of green gremlins led by Talos (Ben Mendelsohn), who can change themselves to resemble anyone they come into contact with.

When a mission goes wrong, Vers is separated from her team and lands up on Earth in 1995 - a place where there are still Block Buster video stores, Radio Shack electronic shops, Alta Vista search engines, dial-up internet and Nirvana on the radio. Teaming up with still two-eyed SHIELD agent Nick Fury (Jackson), and an admittedly cute ginger cat, Vers must ostensibly stop the Skrulls from getting their hands on lightspeed technology that will enable them to make a home for themselves on a planet far beyond the reach of the Kree.

The trick that Boden and Fleck employ to avoid making the film a straight A-Z origin story is to have Vers disturbed by flickers of memories of another life she doesn't believe are hers. Vers's journey thus becomes not only the expected save the world from destruction one but also a search for answers about herself that will lead her to become Captain Marvel.

WATCH | The trailer for Captain Marvel

While Larson certainly seems to enjoy herself and displays an undeniable amount of charm, helped out by an easy rapport with Jackson, there's not much to work with here. Vers's story, in spite of its portentous undercurrents, is ultimately rather thin and not too difficult to figure out. The '90s references that so much of the film's design hangs on are obvious, pat and sometimes cringeworthy. Jackson's de-ageing is immediately convincing so you get used to it quickly and it becomes a fact of the way in which this technology has improved since it was used on Brad Pitt in David Fincher's The Curious Case of Benjamin Button.

Other than that there are the predictable, almost funny one-liners, a running joke involving Fury's eye - for obvious reasons to anyone who has seen any of the Avengers films - and the required CGI-heavy fights and final battle scenes that come with the territory.

Captain Marvel could have been a bit of a revolutionary moment for Marvel and provided a chance to capitalise on its strong, sassy heroine, but rivals DC beat them to it with Wonder Woman. While Larson will certainly add a bit of spirit to the Avengers, her debut here is a bit underwhelming and not particularly memorable or as innovative as it might have been.

Just how sexist is that film? There's an app to find out

Ever wish you could rant about a film's blatant sexism to more than just your family and friends?
Lifestyle
3 years ago

In a move that can be described as debilitating to online trolls, film review website Rotten Tomatoes announced that it's disabling its comment ...
Lifestyle
3 years ago

5 reasons the latest Captain Marvel trailer has us stoked