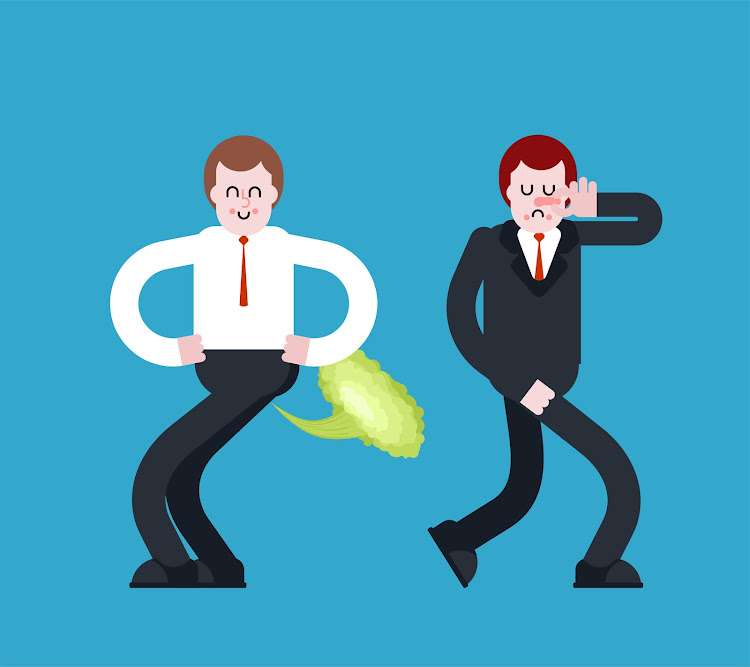 An Australian man recently took his colleague to court claiming he was bullying him by coming into his office and breaking wind on a regular basis.
Image: 123RF/maryvalery

In the era of fake news we didn't feel it was appropriate to come up with our own April Fool's Day prank but - given the plethora of brow-raising news stories out there - we didn't have to.

Here are three recent news stories which sound too ridiculous to be true, but really are:

1. THE COURT CASE AGAINST A 'SERIAL FARTER'

An Australian court of appeal dismissed a $1.8m (about R26m) case brought by a man who accused his boss of bullying him by coming into his small, windowless office several times a day and breaking wind.

According to the Guardian, the 56-year-old engineer said flatulence is a form of bullying and called his ex-colleague Greg Short a serial farter. He claimed to have suffered psychological injury as a result of the “bullying”. The court cleared the air by ruling that, even if the engineer’s claims were true, flatulence does not constitute bullying.

2. MAN WANTS WIFE TO PAY FOR FORMULA AFTER SHE STOPS BREASTFEEDING

A man took to Reddit to ask “Am I the a*hole for thinking formula should come out of my wife’s budget?”

In the post, the man said his wife had been breastfeeding for six months since the baby was born but wanted to switch to formula because she “feels done”.

His sentiment? “I think if she wants to stop for basically no reason then the money for formula should come out of her personal spending money because she is the one making the decision.”

It seems the man soon realised the answer to his question: according to UK news site the Mirror the post was deleted, but one Twitter user took a screenshot and shared it with fellow tweeps.

take all the food out of the house and tell him to get fed on his own body pic.twitter.com/WOjv0UFPTt

The southeastern US state of Florida has a reputation for producing news stories that often sound too ridiculous to be true, so much so that a 'Florida Man' challenge recently swept the internet.

Users searched the term 'Florida Man' and their birth dates to discover what weird tales of misadventure happened on the day they were born before sharing the chuckle-worthy results on social media.

One of the most recent strange-but-true stories to come out of the Sunshine State is that of the "crazy squirrel" that terrorised a neighbourhood.

CBS Miami reported that the squirrel had been injured as a kit and was nursed back to health by a resident of Sarasota. It's since gone on a rampage, attacking four people including — yup, you guessed it — a Florida man, who posted a warning about the critter on Facebook.

"I chased him around and shot him with a bb (air) gun about 10 times but he is still alive so be on the lookout for a crazy squirrel," he wrote.