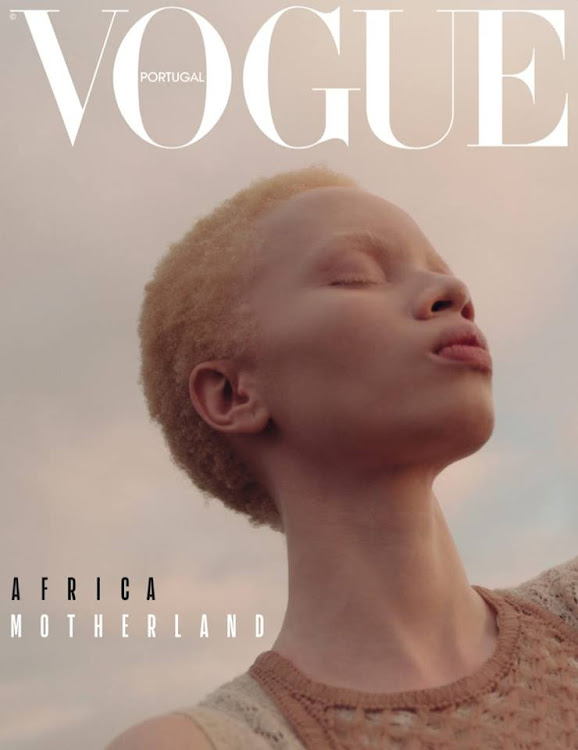 The magazine honoured the continent by having the South African model on the cover of its April Portuguese edition, "African Motherland".
Image: Vogue magazine

Lawyer, model and activist Thando Hopa has made history by becoming the first woman living with albinism to appear on the cover of Vogue.

The magazine honoured the African continent by having the South African model on the cover of its April Portuguese edition: "African Motherland".

Hopa wrote in a Facebook post that she had told a close friend in the past that it would be "lovely to see" a woman with albinism on a Vogue cover.

She said she could not have imagined that woman to be her.

"We are the ones we have been waiting for. I'm emotional, because I see progress and get to form part of a progressive story and narrative.

"I got to a place in my career where I appreciate every specimen of my body and knowing that wherever I go, my existence, the way it is, has always and will always be enough," she said.

I once said to a close friend that it would really be lovely to see a woman with albinism on a Vogue Cover, I would not...

Her post was flooded with congratulations from her supporters.

"I love this! I appreciate you and Vogue for embracing and promoting albinism in a positive light," a comment read.

"So inspiring. All 3 of my children have albinism and they are the most beautiful things to me," read another.

In December 2018, Hopa was named one of the top 100 most influential women across the world.

She is one of many people living with stigmatisation, discrimination and stereotyping because of her skin.

During an interview with Top Women last year,  Hopa described having to deal with the issue.

"It was the contradictory beliefs that people with albinism bring either good or bad luck. Having people hug and hold me for good luck, or conversely spit into the necklines of their tops to ward off bad luck, or make a big show of not wanting to touch me for fear of becoming like me, or having children who are like me. I felt like a walking commodity, struggling to find words to explain how ordinary I am."

Thando Hopa gets candid about the stereotypes surrounding albinism

The BBC has released its 2018 list of the 100 most influential and inspiring women from around the world.
Lifestyle
2 years ago

Shining a light on albinism

A young South African woman who was bullied as a child because of her skin, hair and eyes has become an activist and was honoured by the queen
Opinion & Analysis
3 years ago