'Game of Thrones' strikes a blow for feminism by bringing strong female characters to our screens, but that doesn't mean the way it portrays women isn't problematic 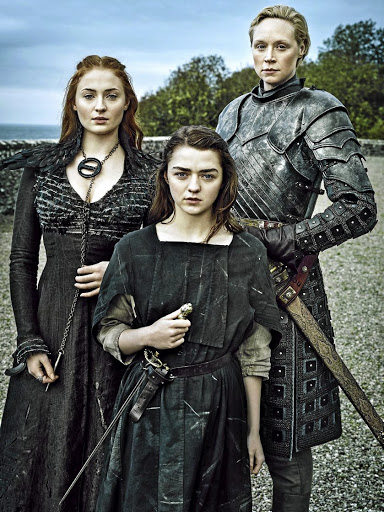 From left, Sophie Turner as Sansa, Maisie Williams as Arya and Gwendoline Christie as Brienne in 'Game of Thrones'.
Image: Supplied

SPOILER ALERT! This article contains spoilers for various seasons of 'Game of Thrones'.

There are plenty of undeniably badass women in Game of Thrones. Daenerys Targaryen gave birth to dragons; burned the Khals to death to gain power over the Dothraki; and burned alive two prisoners of war - and the last of a great house - because they refused to bend the knee to her.

Arya Stark knows her way around a dagger and a sword, and she annihilated the entire Frey house using poison without so much as a twinge of conscience. She also disguised herself with a servant girl's face in order to feed Walder Frey his own sons, who'd been baked into a pie, and then slit his throat. She is motivated completely by revenge and we have every indication that she will continue to show no mercy.

Brienne of Tarth can take care of herself against any challenger she faces in combat; Melisandre was prepared to sacrifice a child to achieve her own ends. Ellaria Sand and her terrifying daughters kicked and stabbed their way across the Seven Kingdoms until they met their own violent ends; and Yara Greyjoy looks like a man, speaks like a man and loves like a man as she commands her massive fleet of weather-worn sailors.

Mad Queen Cersei Lannister is possibly more ruthless than all of them in exacting her revenge for the violent ills that have befallen her throughout her life.

But although revenge is a strong motivating factor, it is the desire for power that most aptly characterises these ruthless women's actions. Women are largely in charge in Game of Thrones, but the means by which they have achieved this power adheres to a stereotypical brand of feminism that still values traditional roles of masculinity like ruthlessness, violence and fear-mongering over alternatives.

Of course, there are characters who have stereotypically feminine traits. Sansa Stark started out wanting to be a princess and marry a prince - unluckily for her, he turned out to be Joffrey Baratheon. Even more unluckily, she was later forced to marry Ramsay Bolton, who raped her.

Are you ready for 'Game of Thrones' S8? Take our quick quiz to find out

If Joffrey didn't quite manage to do it, Ramsay certainly put paid to all Sansa's notions of what it means to be a princess. She started out loving clothes and makeup and wanted nothing more than to be arm candy and raise children. But soon she hardened up and learnt that, to get ahead, brutality rules.

Daenerys was a naive and timid refugee princess, sold into a marriage in which she was raped by her husband until she learnt to love him.

A defining moment in Melisandre's character development was when she revealed her true self in front of a mirror as a 400-year-old crone - she had been using a glamour spell to disguise her repulsive appearance so she could manipulate the men of the series - certainly an ageist and sexist trope if ever there was one: the woman who not only pretends to be something other than she is but who also pretends to be more desirable than she is.

Maergary Tyrell is probably the best example of a female character using her sexuality and emotional intelligence to manipulate her way into the upper echelons. Of course, in the Game of Thrones universe she is annihilated by Cersei, whose blood runs far colder than her own.

We couldn't fault Catelyn Stark as a character to admire, but she let her emotions get the better of her when she let Jaime Lannister go, hoping to exchange him for her two daughters. Not surprisingly, she ended up dead, betrayed more by her motherly nature than any malevolent character.

Considering the burning question at the centre of the final season of Game of Thrones - who will sit on the Iron Throne? - the answer is obvious if you look at who has survived until now. The most brutal will win the day.

While we may be tempted to hold up the female characters as icons of strength and leadership, it is a leadership that is patriarchal in nature. To succeed in Westeros, these women have had to adapt to a society that not only brutalises them, but also insists that the only way they can overcome their brutalisation is to become brutal in turn.

Sure, "masculine traits" aren't only for men, as "feminine" ones aren't only for women, and most of us will cheer when revenge is wrought by a character once thought of as helpless over those who have taken advantage of her.

The well-intentioned but undefended are always wracked and ruined in this show and the most barbaric will win the day.

Even if, as is most likely the case, a woman wins it all in the end, she'll be winning a game that is still only played by men's rules.

'Game of Thrones' recap: 10 things you NEED to know before watching S8

Need a reminder of what went down in Westeros in season 7 of 'Game of Thrones'? We fill you in
Lifestyle
3 years ago

As the final season of Game of Thrones premieres on April 14, HBO and Columbia Records have announced the release of the accompanying soundtrack For ...
Lifestyle
3 years ago

Will we still have water-cooler acquaintances post 'Game Of Thrones'?

'Game of Thrones' became an institution, with each season an almost festive occasion
Lifestyle
3 years ago