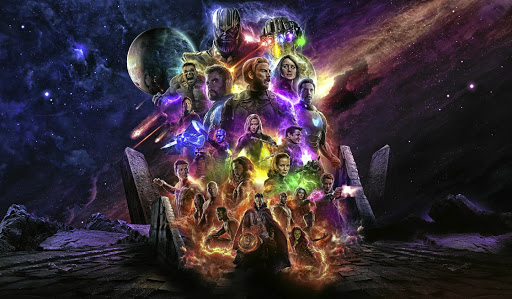 Ten years ago Robert Downey Jr, playing Tony Stark, a whisky-sodden version of his former real-life self, kicked off an 11-year journey that has brought us to one of the biggest moments in franchise film history, one that could even rival the drama of Luke Skywalker getting into a fight with his dad.

Regardless of how you feel about the Avengers movies, they are the cultural touchstone that will come to define this generation the same way if not more indelibly than Star Wars did for previous generations. Measuring up to audiences' expectations of the final film in a franchise with this much hype is a tall order.

Fan theories have been flying around for months and YouTube is filled with deep wormholes outlining the lengths to which people have gone to find any scrap of information about the film. Until Friday, there were governments with less well-guarded secrets than the contents of Infinity War. So what does this film deliver when its fans are expecting the earth? The universe!

To say that Avengers: Endgame is epic in scale is inadequate. Every Marvel movie is epic. Captain Marvel was vast. Black Panther was grand. Hell, even Guardians of the Galaxy was colossal. This film, however, is something else. Combining many of the successful plot devices from previous films, the Endgame's directors, Joe and Anthony Russo, built something truly universal in scope and managed to do so without the whole event becoming a noisy, malfunctioning strobe light in the mould of Aquaman. They did come close a few times though.

A blind hermit could have predicted that Avengers: Endgame would have a huge, climactic battle finale, so no spoiler there. But the final battle scene does wobble drunkenly on the line between entertainment and a seizure. Also, because there are so many Marvel characters of middling to high importance, the process of shoe-horning them all onto screen can feel like you're watching the village try on Cinderella's glass Christian Louboutin.

Then there's the pandering. It's safe to say that the world is keen on movies featuring characters that look unusual. We're all looking to add a little spice to our cinematic mayonnaise. That said, there were some instances in which Endgame did seem a little smug - kind of like that person at the office who enjoys flaunting their progressive credentials a little too loudly. We get it, Marvel, there will be more women, black people and non-heterosexuals playing major roles in the future, now stop patting yourselves on the back for riding the tide.

Oh, and the ending went on a little long.

Now that all the objective criticism is out of the way let's get to why (without any spoilers) this movie deserves every standing ovation it will get in cinemas. Avengers: Endgame is what happens when a production team masters the superhero genre with aplomb, specifically by not trying too hard to be a superhero movie.

If anything, Endgame is a heist movie, a comedy, a drama and a sci-fi action flick all in one.

It's everything you want it to be at any given time. If you cried during Infinity War, bring tissues and some water. If you laughed during Thor Ragnarok be prepared to do so again because whoever wrote Thor's lines deserves an award. If you enjoyed all of Captain America's earnest and steadfast hero vibes, you're in the right movie.

More than all of that though, every movie needs a good villain and Thanos is the best of them. His light may be a little dimmer in Endgame but he is inevitability personified - like a tax man who keeps closing your loopholes.

Barring a huge upset, Avengers: Endgame will be the biggest movie of the year, because it's as much a cultural moment as it is a moneyspinner. The film deserves it. Game of Thrones is probably the only other entertainment on screen that has come close to having the same impact on pop culture.

Unlike with Game of Thrones though, you don't need a degree in Plot Untangling to figure out what's going on. So before you become one of those sour people on the internet snarkily tweeting about how you're part of the 1% of people who hasn't seen Avengers, do yourself and the rest of us a favour. Go and watch it, it's worth all three hours of it.

People went through the most on these streets for Avenger: Endgame tickets.
TshisaLIVE
3 years ago

The surviving members of the Avengers regroup for a last stand against cosmic bad guy Thanos in a new trailer that coincides with the commencement of ...
Lifestyle
3 years ago