How do the Toyota Corolla, Volkswagen Golf, Mazda 3 and Renault Mégane stack up? 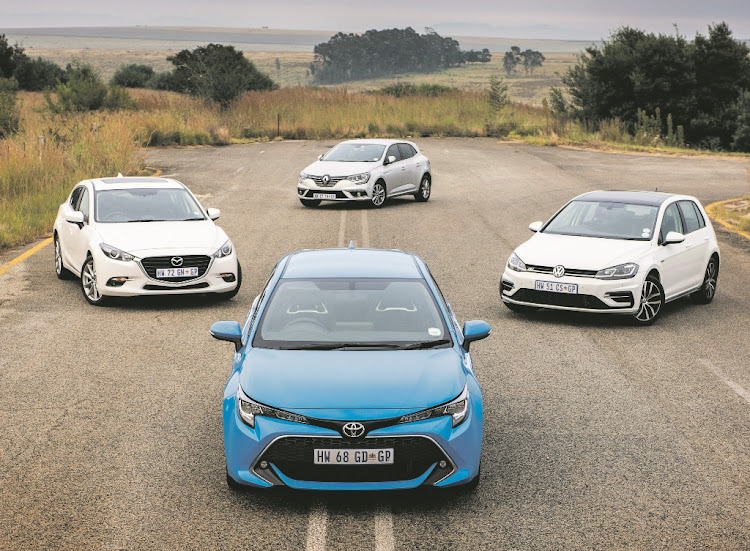 Which manufacturer invented the hatchback? Such questions inevitably yield disputes. Gaelic innovator André-Gustave Citroën, with the 1938 11CV Commerciale of his namesake automotive brand, looks good for the title.

For the sake of simplicity, one could say that the most basic tenet of the body format is a tailgate hinged at the roof and a two-box design. There are, of course, differing variations and executions of the template.

Allow us to illustrate with a modern scale that references the new car market. Consider the bottom-end, where the horrible Datsun Go would fulfill the minimum criteria. And then on the extremely niche, luxury-focused side, consider a product such as the BMW 6-Series GT.

We assembled four: decades-old nameplates from Toyota and Volkswagen, with the Corolla and Golf respectively, hold impressive equity in the minds of local buyers. Although they have had ample time to forge reputations, the Renault Mégane and Mazda 3 are relative new kids on the block by comparison: the former was conceived in 1995, while its Asian counterpart was breathed into life in 2003.

In addition to the expected information in our overview, we opted to provide a separate bit on the contenders' suites of digital abilities.

For that we enlisted the help of foremost technology journalist Nafisa Akabor. The models featured here sit towards the top of their ranges in specification, all wielding automatic gearboxes.

All of a sudden Toyota seems to have its mojo functioning at optimum levels. When last (if ever?) could you say the sexiest car in the parking lot was a Corolla? This takes over from where the lacklustre Auris took off - and what a spectacular show of intent, with its striking aesthetic language. Its edginess is complemented by a dazzling hue, labelled Blue Flame on the order form. 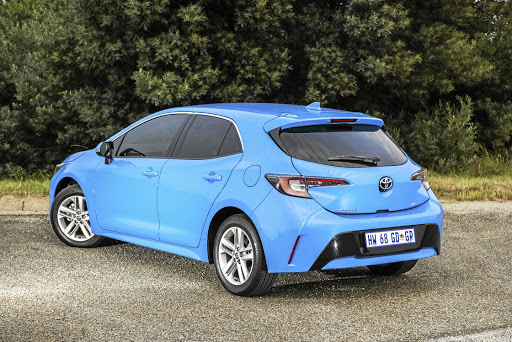 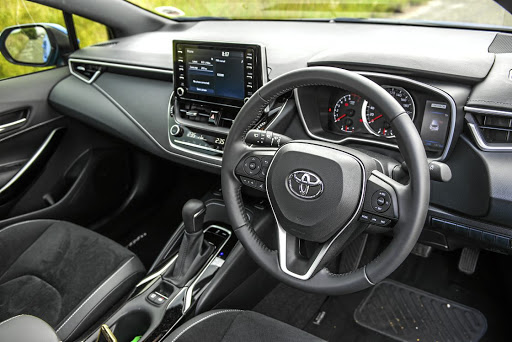 Inside, the ambience is equally interesting. The seats look as if they belong in something far more exotic. To drive, it feels equally good. Forget the clichéd sporting pretences for a second: this does plushness with aplomb. One staffer quipped that it seemed to ape the character expected from the upmarket Lexus division of Toyota.

But one thing spoils the broth - a continuously variable transmission (CVT). Sure, the engineers worked in several steps to mimic the existence of individual ratios. But the elasticated delivery and indecisive drone endemic to the setup is very much there. You can have a manual, with a lower specification, however.

That aside, there was plenty of fawning for this daringly styled iteration of a model line one usually associated with tepidity.

What we liked: Finally, a Corolla you can describe as cool.

Connectivity: "The design, large screen and interface on the new Corolla Hatch is straightforward. The pairing process with an iPhone Xs was easy, but to access playlists you have to choose the audio source first.

"The voice command system does not understand natural speech; you have to use a specific syntax, which is not ideal. The voice prompt to dial out from the steering wheel worked fine, but figuring out supported features was through trial and error.

"Plugging the smartphone through a cable connection has no additional features other than charging the device."

It is held in the same esteem as icons like the Porsche 911 and BMW 3-Series, as a product that popularised a genre. It might not have been the first of its kind, but the Volkswagen Golf is lauded as the archetypal C-segment hatchback, the first go-to.

Such bragging rights do not come cheaply, of course. This is seemingly no deterrent for consumers, given how well it fares from a sales perspective. Amusingly, it should be noted that Volkswagen sells more GTI and R versions than the regular, humdrum flavours. 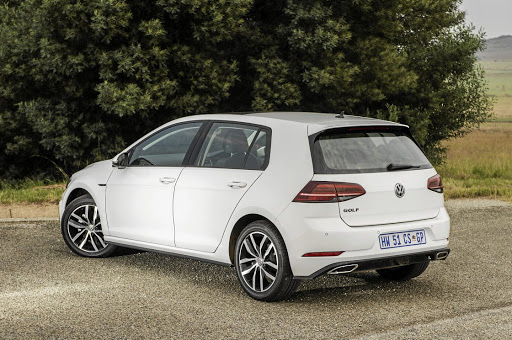 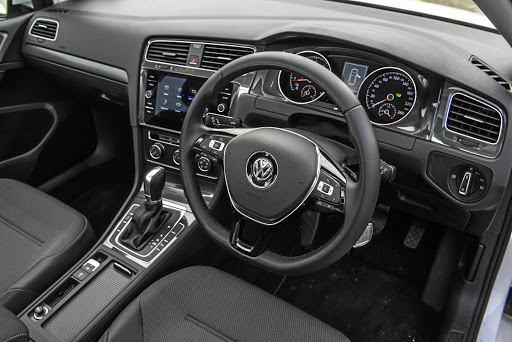 Our tester sought to invoke the spirit of its more potent sibling, by wearing an optional R-Line styling kit. It might be the oldest offering here, first launched in 2013 and treated to a mild update in 2017. But the inherent quality of the Golf creates the impression that it would endure forever. Vault-like insulation, cushy ride quality and a well-sorted powertrain make the Volkswagen an assuring steer in all conditions.

The new one is poised to arrive next year and in typical fashion, is likely to be evolutionary rather than dramatic in its progression.

Sure, the Golf might be a bland and conventional choice. But as is often proven, it is this quirk-free engineering approach that stands the test of time.

What we disliked: Gets expensive with options, loved by thieves.

Connectivity: "Pairing a smartphone to a car should be a seamless process, however, this was not the case on the Golf using an iPhone Xs; the first three attempts failed for different reasons. Once paired over Bluetooth, our music tracklist was not available, which was rather odd, despite being able to pause, skip and play.

"CarPlay (Or Android Auto) works with a cable connection; and can read or compose messages for you, however, the voice command feature needed a separate activation key to use.

"The overall design of the infotainment system is modern and there were no unnecessary buttons to fiddle with. Unfortunately, it was let down by a poor user experience; and certain functionality appears to be tied to extra costs."

Strangely, our feelings were less chipper about the maturation of the Mazda 3. There are aspects of the vehicle that feel downright dated - even though it is not the oldest in contention.

Our Astina-grade tester features the largest sticker price here, justified by a generous specification level which comprises a standard Bose audio system, among other goodies.

Most will agree it is still attractive, a nod to the efficacy of the Soul of Motion design philosophy often quoted in the brochures. Note that the replacement is imminent; the fourth-generation car is already the recipient of glowing reviews from outlets abroad. 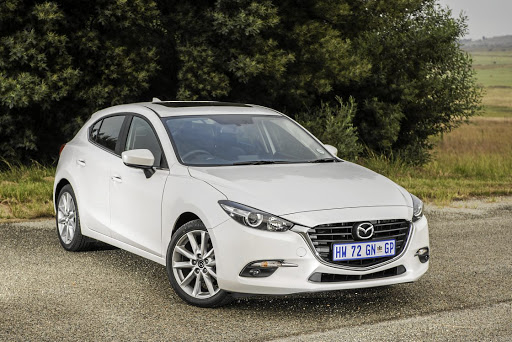 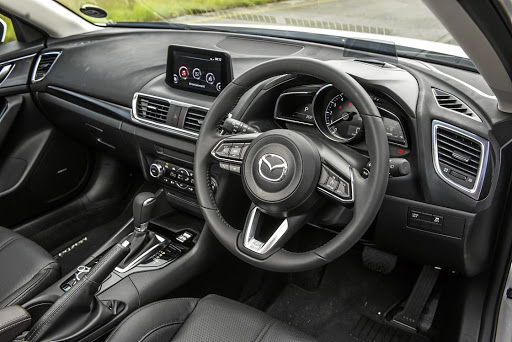 This outgoing version has performed rather well for the brand locally, as one of the models that spearheaded the Mazda revival in the wake of the Ford split. Launched in 2014, the 3 received a host of subtle tweaks in 2016, including restyled interior elements, plus a more assertive hooter, to name a few. It is the only normally aspirated offering present, which cast a light on just how great it is to be able to have the benefit of boost underfoot.

Yes, this particular 3 errs on the strained side when you demand a little instant fizz. Some owners (that means you, dad) argue this simpler make-up means less to go wrong. But if Toyota, a byword for reliability, can go the forced-induction route without fear for their reputation, so can Mazda.

What we liked: Lots of kit in Astina guise.

What we disliked: Anaemic performance, new one arriving soon.

Connectivity: "The infotainment system on the Mazda 3 may be small but its simple with five menu items and easy to figure out. Smartphone pairing did not fall under the Settings menu though, but rather under Communication, and can be done while the vehicle is moving.

"Accessing the menu works with a touch functionality combined with the dial on the centre console, which could take a bit of getting used to. There are physical buttons to easily switch to Navigation, Music or Home. Built-in apps include Fuel Economy and Vehicle Status.

If you are committed to straying from the herd, this is the obvious choice. Sighting a Mégane on local roads is a rare occasion - Renault earns the bulk of its sales in the compact spheres of the market.

Many will remember the charismatic second-generation of the nameplate, with its generous derrière. Things took a conventional turn with the follow-up and now, as generation four, the French hatchback is pretty restrained in personality. 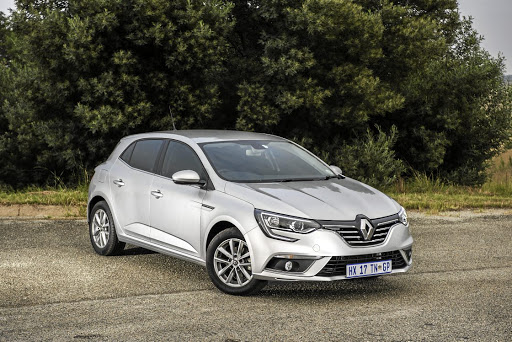 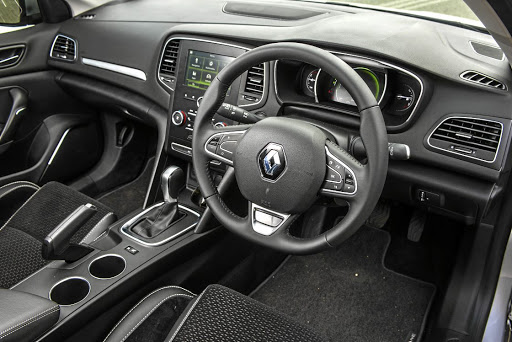 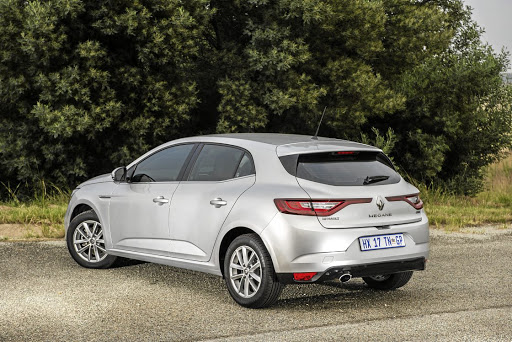 Nightfall is particularly flattering to the Renault, with its distinctive rear light that spans the width of the tailgate. Which is not to say the cold light of day highlights deal-breaking deficiencies from a looks perspective: this is a handsome car. What else can we say about this slow-selling French?

It strikes us as a commendable effort, if somewhat middle-of-the-road. Viewed in this company, one cannot say that there are any defining features that would pull one away from the edgy Toyota or the solidly hewn Volkswagen. Its dual-clutch gearbox simply cannot match the unit in the German counterpart for smoothness. Still, you are unlikely to lose it in a crowd. Nor is it as likely to get stolen as the contender from Wolfsburg. If rarity is a crucial criteria then the Mégane is worth a gander.

What we liked:  Something different, rear lights.

What we disliked: Dual-clutch gearbox not the best, quite an average car.

Connectivity: "The overall menu on the Mégane was tricky to figure out, and took a few tries to find the right setting to go into for initial smartphone pairing.

"While it shows Apple CarPlay support once plugged to a cable, it wasn't possible to go to the standard interface that is the default. It felt like an inconsistent experience, with Siri working for voice calls, but Maps wasn't accessible, yet Spotify worked.

"The standard voice system required too many commands to skip a track, which is where Siri was useful. Once we unpaired the device from the vehicle, it still showed up on the dashboard, making it difficult to use with a previously paired iPhone.

Battle of the affordable off-roaders: we put a trio of 4x4s through their paces

We pit the Mahindra Thar, Renault Duster and Suzuki Jimny against each other
Lifestyle
2 years ago

Battle of the junior hot-hatches: we test 3 of the best