No, it wasn't just you: why that 'Game of Thrones' battle looked so dark

Is it worth trying to adjust your TV settings to be able to fully enjoy the magic of the Battle of the Long Night? 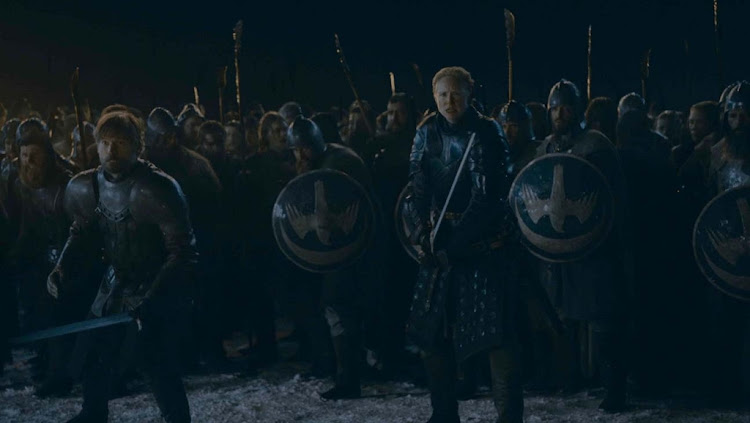 It's tricky to tell in the dark but it looks like Jaime Lannister and Brienne of Tarth mean business in episode three of 'Game of Thrones' season eight.
Image: Courtesy of HBO

SPOILER ALERT! This episode contains major spoilers for season 8 of  Game of Thrones. If you're anything like me, then last night around 10pm you were sat in front of your television, popcorn on your lap and drink in your hand as the latest episode of Game of Thrones (GoT) began.

As the familiar theme music started and all your favourite characters came into view, ready for the biggest fight of their lives, you may have slowly started scratching your head and checking your spectacles for scratches — was it just you, or did things seem a bit murky and unclear and hard to see?

Oh my 'GoT'! Last night's epic 'Game of Thrones' battle in memes

The only thing fiercer than the women of Westeros in the Battle of the Long Night was the reaction on social media.
Lifestyle
2 years ago

As the most epic standoff in television history began to commence its 90-minute run you might have found yourself becoming increasingly more concerned and irritated as you fiddled with your television settings trying to figure out who had died, who was alive, who had they killed or who had killed them before resigning yourself to the fact that it might be time for a visit to the optician.

However, you wouldn't have been alone as the millions of online complaints about the lighting in the third episode of the season eight of GoT attest.

Me trying to see who’s fighting whom in the dark. #GameofThrones pic.twitter.com/Ztv98xNb84

My friends and I trying to watch this dark af episode #GameofThrones pic.twitter.com/3wFwSMM0AC

Aired in the US on Sunday night and in South Africa on Monday, the image quality of the most enthralling and epic episode of the world's most popular show has been the subject of much heated aesthetic and technical debate over the past few days.

The Battle of the Long Night between the White Walkers and everyone else (well almost) in Westeros has it's closest cinematic comparison in Lord of the Rings’ (LOR) massive final instalment battle of Hell’s Deep. But, according to the GoT's cinematographer, Fabian Wagner, while LOR’s climax was certainly an influence for the show's staging and direction, its lighting plan was decidedly different.

Whereas LOR’s Oscar-winning cinematographer, Andrew Lesnie, chose to utilise unnatural lighting sources and post-production assistance for his showdown, Wagner and his team opted for a more naturalistic approach.

This means the crew behind GoT’s big battle — set during the height of winter and featuring a constant snowstorm, three dragons and a witch who summons fire — had to work hard to make things appear to be seen as if from the perspective of the characters, while also satisfying the demands of viewers.

Spoiler etiquette: how NOT to ruin 'Game of Thrones' for everyone else

Many sites on the web have already run stories advising viewers as to how they can readjust their televisions for a better viewing experience. But the truth is, as other more tech-head sites have pointed out, there may be other factors at work when it comes to the world’s most-watched show in the age of streaming. These include bandwidth compression, colour banding (it’s complicated), TV quality and type and the speed at which White Walkers operate.

Ultimately though, however much you fiddle with your TV's settings, chances are that until the show finishes and you’re able to purchase the deluxe Blu Ray boxset edition, you’re unlikely to be able to really see the best version of the episode as its creators intended. That doesn’t change the fact that a shitload of your favourite characters died in this episode and the future of Westeros still hangs very much in the balance.

There are only three episodes of the final season of GoT left so whatever the quality of the lighting, you can be sure we’ll all be back sat in front our televisions on Monday, waiting to see how it all pans out.

If Mzansi politicians were in 'Game of Thrones', here's who they'd be

Westeros is a ruthless place, so too is the world of South African politics. So it's no wonder many of our public figures have a 'Game of Thrones' ...
Lifestyle
2 years ago

'Game of Thrones' strikes a blow for feminism by bringing strong female characters to our screens, but that doesn't mean the way it portrays women ...
Lifestyle
2 years ago

Lena Headey: the most savage woman in Westeros is just a Yorkshire mom

The actress who plays Cersei Lannister talks to Margaret Gardiner about 'Game of Thrones', fantasies of theft and motherhood
Lifestyle
2 years ago