Gate 69 has been voted the best theatre experience in the Western Cape on TripAdvisor. Claire Keeton chats to the stars of its latest show 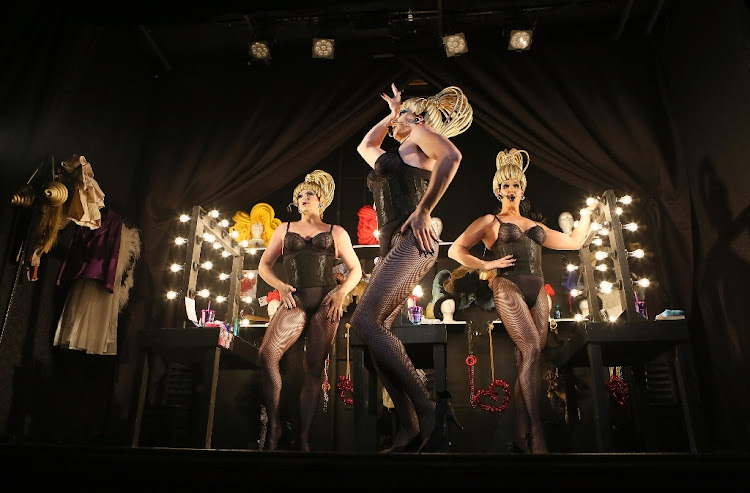 It feels like a game of truth and dare on stage when SA's premier drag troupe strip off their wigs and gowns, and bare their secrets. There's even a hint of Russian roulette: their revelations are so close to the bone that they could be fatal to the glamour of the "trolley dollies" of Gate 69 - that's if they didn't hit the funny bone so hard with every round of banter.

With their corsets, fishnets and vulnerability under the glare of the spotlights, Cathy Specific, Holly and Molly could not have been more exposed if they had strutted (more than their flawless butts) naked, before the patrons under their spell at the cabaret theatre in Cape Town.

The seven-foot blonde Cathy Specific, who starred in Madame Zingara - and whose alter ego is Brendan van Rhyn - admits their latest show breaks even more taboos than previous performances at Gate 69.

And that's because it's far more than bawdy pantomime, farce or barbed stand-up, where audience members run for cover. NON-Specific is an intimate experience, seducing the 80 to 90 people inside the "purple palace" into a world that's usually hidden.

MORE THAN A SHOW

"What do you do after the show?" the girls ask each other, heels off. Cathy fans between her sprawled legs.

This show has mirrors, no smoke. Now you see the drag queens in their silky magnificence. Now you see them in slippers. Solid boobs get blamed for back pain. As the youngest, Holly makes jibes about how her seniors' joints (and CDs) are worn out, especially Cathy's.

But Van Rhyn - who blasted men and women away as the magnetic Frank in the Rocky Horror Picture Show - looks ageless as the blonde bimbo with a vain streak. Of course, props and three hours of makeup in the dressing room, while Cathy takes shape, support this illusion. 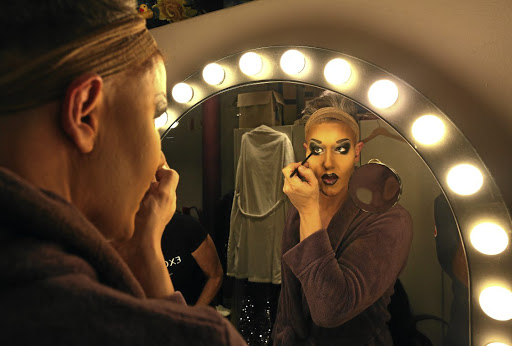 From the time she made her first appearance in October 2007, Cathy Specific has been a celeb.

"Is that her?" Pieter-Dirk Uys asked the first time they were introduced by Van Rhyn's theatre mom, Marilyn van Reenen.

TWO FOR THE PRICE OF ONE

"People saying you are living your dream. I am living my truth," says Van Rhyn. "I never wanted to be born a girl. But when I'm a girl, I'm a girl. When I'm a boy, I'm a boy. When I am Brendan, I am happy to be him.

"I'm good at being both. I am like two paints, red and yellow, but my success is keeping the two (personalities) separate. There is no mixing of colours to make orange. I always joke if you go for me you get two for the price of one," he says, fastidiously applying eyeliner, while the theatre dog Scrooge looks on.

A white-faced clown and novice singer have turned a once-tatty country hotel into a weekend getaway sensation of flashing sequins, feasting and ...
Lifestyle
3 years ago

The name Gate 69 references the inversion of male and female and sex. "It's about the yin and the yang."

Van Rhyn's first successful tour as Cathy was in 2011, but he always wanted a home and companions for his other half. Where would he find six-foot-plus drag artists to prance around with Cathy, he wondered. As it turned out, at an army musical in the Pretoria State Theatre, performing with Christopher Dudgeon and Rudi Jansen.

However pared-down their appearance in NON-Specific, the trio's mix of music and parody still brings the audience to its feet in standing ovations.

Men and women were singing like groupies during a riotous medley of '80s hits, when the flouncy outfits of the dollies got more outrageous with every song.

Dudgeon, aka the bitchy Holly, took risks with this script and succeeded in sweeping the audience along, with one-liners, chorus lines and slick direction. 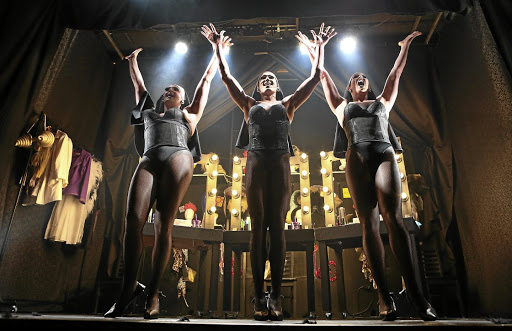 A traditional cabaret kicked off the show but then, as promised, the girls gave a "sneak peek into their lives … maladies, melodramas, traumas and tantrums".

Cathy, exuding her own sexual force field, performed an adapted version of Cabaret. For a bass baritone who can't hit a top C, she sang like a siren: "Come to our cabaret ... All the excuses, we've heard them before/The best one we've had today/Was, guys who dress up in women's clothes/Will end up in hell one day."

The trio got into gossiping about the guy at Table number so and so - much as the cabin crew did about passengers when Van Rhyn was working for SAA - Capetonians and whether they ever work, and other mysteries of the day (or night).

DON'T BE A DOOS

They also swapped stories about coming out to their families, in which older sisters seemed to play a pivotal role. One supportive, one threatening blackmail. Holly's sister was also gay.

Later Jansen aka Molly, likened to the dumb one (Rose) in the Golden Girls TV show, sang a poignant rendition of Send in the Clowns and a silence lingered after the last note.

"Are people laughing at us or with us?" Holly asked. "I hope it's with us," says Cathy.

When the words on the backdrop 'Queer Faggot Moffie' flipped to 'Human', the audience seemed to exhale again.

Men and women were crying on the balcony, says co-owner Luanna Shonfeld, who was handing out tissues to them. 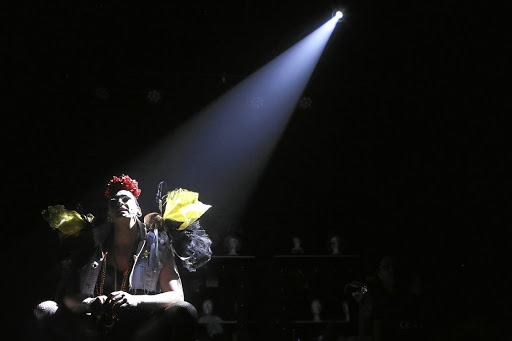 Then Cathy grabbed the limelight again, shifting the mood. "I thought this was a comedy"? she asked. "The point is, people, it's not all that serious. All we're saying is: 'Don't be a Doos'."

Honestly, that would be hard at Gate 69. It is a safe space, free of judgment where anybody can experiment and have fun - even a rugby player from the Irish team came in heels with painted toes - and flaunt their stuff.

The first time Shonfeld saw Van Rhyn blazing his stuff in the Rocky Horror she was starstruck. "I had this wind in my stomach and thought he would be a superstar," she says.

They bonded instantly and she embraced his passion for a cabaret theatre. Two-and-a-half years and about 52 buildings later, they found 87 Bree Street.

Raising funds was a tense affair but Van Rhyn, Shonfeld and the third co-owner, Dudgeon, pulled it off: on September 15 2016 the doors opened.

In almost three years none of them took a day off or a sick day, until a break last December.

"I have a love of performing and a love of flying and wanted to marry both without having to choose. I'm a character from time in the airline and I know about flying," Van Rhyn says, of the airline concept.

As the purser at Gate 69, Cathy leads the way. Her face is on the bar stools and on Andy Warhol-style wallpaper that lines the stairs from the bar to the lounge.

The VIP experience starts on the red carpet, where guests get an embrace with kisses and hugs from Cathy and Luanna.

This hands-on attention continues uninterrupted inside, where giant arched mirrors shimmer in the light. Once seated, either in the first-class downstairs or business and economy class in the balcony, the trolley dollies serve your drinks and clear the tables of their mezze-style platters. 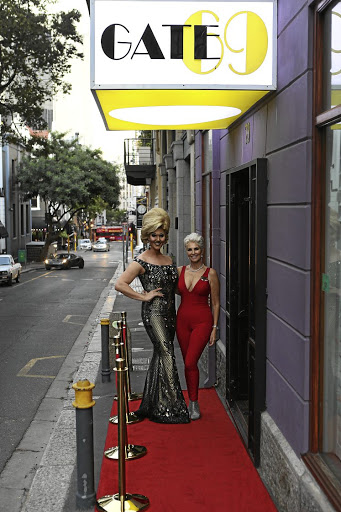 Dessert is ice cream in sugar cones, served with flair by the boys after the curtain has come down. Out of drag, it looks like they have switched from headlining a technicolour Bollywood movie to being the stars of a black and white classic.

Surging in popularity, the cabaret has been voted the best theatre experience in the Western Cape on TripAdvisor, Cathy trumpets with glee. "We are on the top three cultural outings in Cape Town after the Zeitz MOCAA and Kirstenbosch."

The rise of Gate 69 has been remarkable, though the audience has yet to diversify.

"We have had eight incredible shows. We are not a gay joint. We are not a seedy club. We are like the Moulin Rouge in Paris," Cathy brags. "You come to Cape Town, you must come to Gate 69." That's the dream.

For a boy who graduated at Pretoria Boys High School in 1995, a year ahead of one-time rugby captain John Smit, Van Rhyn has flown close to the sun without losing his wings. He got into drama in school in London after matric but didn't have the funds, so came home to study musical theatre for three years at Pretoria Technikon. Then Van Rhyn was a flight attendant on SAA for six years, before going back to the stage.

By the time he turned 40, the cabaret theatre had turned from fantasy to reality. The magic of the trolley dollies is that they are unique and don't try to eclipse each other. Van Rhyn says: "There is no competition between us. We each have our time to shine.

"What's great is that everyone in the audience identifies with one of us, like recognising the bitch in ourselves."

"The shows are so rewarding, making people smile. I have a gift for dressing in a frock and heels, which changes perceptions and touches lives."

At Gate 69 he touches patrons too, leaving the occasional black lipstick print on faces.

The game is kiss and tell. Go play.

Each season of 'RuPaul's Drag Race' has allowed for more charisma, uniqueness and talent to shine through
Lifestyle
3 years ago

“SufferK8 is the name of my drag character because I feel suffocated when I’m not in drag,” says Gavin Collins as he applies make-up to his cheeks in ...
Lifestyle
3 years ago