Royal Enfield Himalayan: a motorbike that's up for ANY adventure 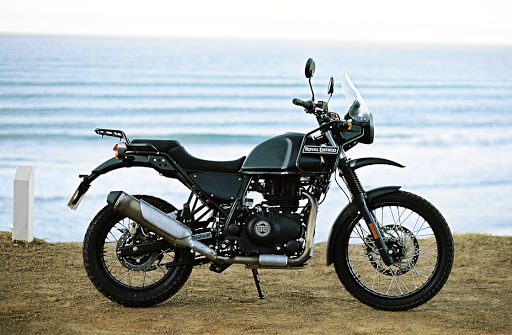 The Royal Enfield Himalayan feels like it will run for a million miles on the best and worst of the world's roads without too much bother.
Image: Paul Ash

Being a practical man, he would also have seen the jagged edge of the steel signboard hanging over a bike at a motorbike scrapyard one morning in a little town in India.

It was a long time ago. I was wandering around West Bengal, looking for old steam engines to photograph and an Enfield Bullet - the bike from which the Himalayan has sprung - to ride home to Joburg.

Berhampur did not have much but it did have a second-hand bike dealership whose entire stock was a dozen ratty machines parked outside a tin shed. In the middle, standing out from the rest on account of its faded red paint job, was a grand old bike that looked like a Bullet. I threaded my way through the machines. I had eyes only for the bike, which I leaned forward to take a closer look at. I only noticed the sign when it tore a chunk of flesh out of my scalp.

Staggering back, blood spurting down my face, I said to my girlfriend who was standing by in horror: "It's a Matchless."

Later that day, the blood now dry on my scalp, we did find a Bullet parked in an alleyway and no one around. I approached it with reverence, touched it, ran my hands over its tank, expecting shouts of "Stop! Thief" at any moment.

"Take a picture," I said to my girlfriend as I leaned on the bike. 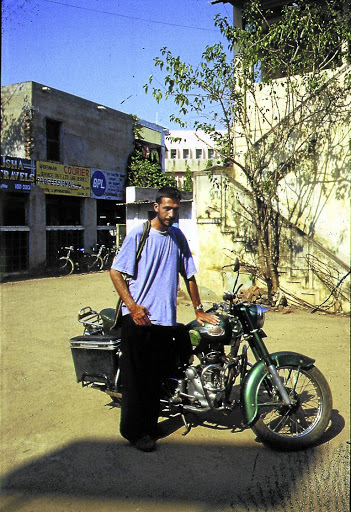 "You are such a bonehead," she said.

To fully appreciate Enfield's brand-new Himalayan adventure bike, you need to understand the long and winding road by which it has come to be.

The bike's family tree reaches back to the turn of the last century when a little London-based manufacturing firm added motorcycles to its offerings of bicycles, guns and sewing machines. That's pretty much where the connection between weapons and motorcycles ends - when the Bullet was launched in 1949, Royal Enfield named it not in memory of the company's gunsmithing but for speed, because back then travelling at 80km/h on a motorcycle was like travelling at the speed of light.

The military hangover is hard to break, however. The Enfield name survived the total and dramatic collapse of Britain's motorcycle industry, purely on the strength of the fact that in 1954 the Indian Army was desperate for motorcycles and it chose the Bullet as its mount. A factory was set up in India to produce bikes under licence for the army and long after parent Royal Enfield had shuffled off into history, Enfield India was still churning out standard-issue, single-cylinder thumpers by the thousand.

The machines, however, were temperamental. They vomited oil, dropped valves and stuttered in the rain. That was all very well in India where Enfield mechanics outnumber the Enfield population by about 100 to one but did little to help the bikes sell elsewhere.

In the 1990s Enfield's fortunes began to swing. With the Bullet production line spruced up, thanks to help from Swiss motorcycle genius Fritz Egli, the bikes were beginning to find favour in export markets.

Their desirability was helped by a global passion for all things retro. Retro watches. Retro clothes. Vinyl came back, so did 35mm film cameras. Hipsters began writing blogs on typewriters in coffee shops.

Retro bikes were, of course, a natural fit. That classic British motorcycle marque Triumph came back in, er, triumph - its thoroughly retro Bonneville is one of its best-selling bikes. All the other famous bike makers, from BMW to Moto Guzzi, have also flirted with retro models.

In 1995, the Indian company bought the rights to the Royal Enfield name from the long-defunct British parent, a move which has helped move the bike in conservative bike markets - like Britain.

New models with lean-burn engines and disc brakes were produced - still Bullets but with refinements. Along with the standard 350cc and 500cc Bullets that were basically unchanged from 1949, there were now cafe racer and scrambler versions too.

How much petrol money will you save by trading your car for a motorbike?

To find out Brenwin Naidu and Mat Durrans pitted a Suzuki Baleno 1.4 GLX hatchback against a Suzuki SV650 sport bike
Lifestyle
2 years ago

It would be years after that bloody day in Berhampur before I rode an Enfield and when, finally, the bikes began appearing in SA, the experience was a little like drinking warm beer.

The bikes looked great - all chrome and teardrop tanks and spoked wheels. They oozed character and heritage and their engines thumped like tractors; not a bad thing in my book. They also oozed oil, their gearboxes ground and clunked, and once you had got them up to 100km/h, they vibrated like jackhammers, the side mirrors worked loose and stuff fell off.

So I bid my Bullet dreams goodnight and moved on. And then I heard about the Himalayan.

The Himalayan marks a radical departure for Royal Enfield. The only thing retro about this bike is its big round headlight and analogue dials. That's about it.

From the side, the Himalayan is a proper adventure bike with a somewhat industrial design look to it, which is a very different thing to saying it is industrial.

The red and green paint jobs and blinding acres of chrome that slathered the original Bullets is gone, replaced in the Himalayan's case by a lovely granite black. The purposeful demeanour is helped by the humped 15l tank and stepped seat along with a useful rear rack and steel tank protectors which can double as side racks.

Looks are only part of the story, though.

My test bike was kindly loaned by Thruxton Motorcycles in Bellville who were more than happy to let me disappear with their lone Himalayan for a few days.

From the second I thumbed the electric start I realised we were no longer in Kansas, Dorothy. The 400cc single thumped to life, the gearbox clicked sweetly into first and off we shot like a shiny, black rocket.

The test of any bike is how it handles modern traffic. I headed into Cape Town's cray-cray mid-morning traffic on the N1 and set course for town. The bike felt utterly planted on the road. It had presence, a notion helped by the blatting motor which is as good as a hooter and a bright headlight to let car drivers know you exist.

Best of all, I found that even in fifth and doing 100km/h, I could twist open the throttle and the bike would pull away like a Boeing at takeoff. That's the kind of torque you need and want in modern traffic.

By the time we got to town, the Himalayan and I were best friends. I would test the limits of that friendship over the days that followed and find little to complain about. The stepped seat is a little too tight for my six-foot frame, and the windscreen needs to be higher.

I loved everything else - the way it pulled away, the way it felt planted on the road, gripping the bends of the Atlantic Seaboard road. High speed means nothing to me but the Himalayan will happily sit at 120km/h for hour after rocksteady hour.

The result is a bike that works all the time. Royal Enfield named it for the world's greatest mountain range and there is nothing immodest about that. The Himalayan feels like it will run for a million miles on the best and worst of the world's roads without too much bother.

I would buy one tomorrow.

The 2018 BMW G 310 GS offers more flexibility than the street-going G 310 R, which means you can take it anywhere, writes Thomas Falkiner
Lifestyle
3 years ago

Suzuki GSX250R: it's hard to find much to dislike about this motorbike