All the best reactions to the 'Game of Thrones' finale 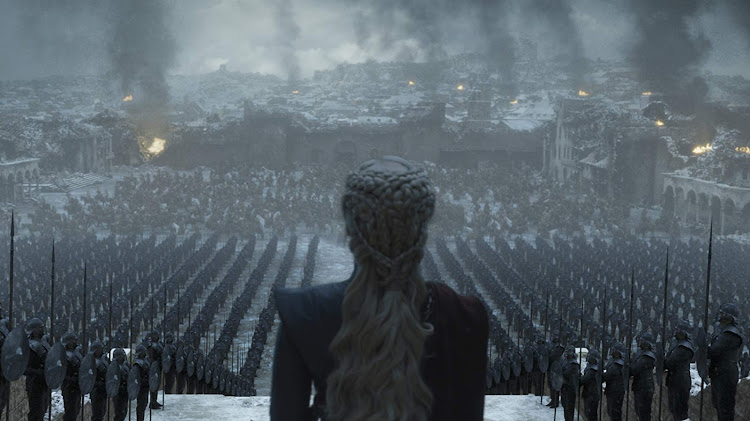 Daenerys Targaryen in a scene from the last episode of 'Game of Thrones'.
Image: Helen Sloan/HBO

SPOILER ALERT! This article contains spoilers for the finale of season 8 of 'Game of Thrones'.

That's it, it's officially the end of an era. As the credits to the last-ever episode of Game of Thrones rolled, fans took to social media to express their feelings about the outcome of one of the world's most popular TV shows.

You did your best bro. #GameOfThrones pic.twitter.com/uRWBiSFbPe

The feeling I get when I realize I wasted 72 hours and 16 minutes of my life, just to hear “why do you think I travelled all this way”. #shame #GOTSeasonFinale #gotanygoodwriters pic.twitter.com/Dxa93iXFUd

What everyone needs after watching season eight of #GamesOfThrones pic.twitter.com/LXrnhcnny0

Particularly with the writers' choice of crowning Bran Stark king of the Seven — make that Six — Kingdoms:

when u didn't contribute to group project and still got an A #GoT #GOTFinale pic.twitter.com/B0v7YQoFDO

So learning about the parentage of Aegon Targaryen...waste of time? Didn't even come up for consideration? #GOTSeasonFinale #GOT pic.twitter.com/XnGGsX3QJs

Tyrion : Who has a better story than Bran?

yara after sansa declares the north its own kingdom:
#GameofThrones pic.twitter.com/BvIJAe1ZCo

Others loved the way things turned out:

I think we all got the ending we deserved. #GameOfThrones #GOTSeasonFinale pic.twitter.com/k8JNAhCH8m

Me trying to figure out why everyone is so upset #GamesOfThronesFinale pic.twitter.com/fuXSv2tfoN

A few are even hoping for a spin off:

West of Westeros is a spin-off I’d watch.

And, they might get their wish. The Telegraph reports that George RR Martin, the creator of the books on which Game of Thrones is based, is working on a pilot for a GoT prequel starring Naomi Watts.

According to HBO, the prequel will be set thousands of years before the current series takes place and will tell the story of "the world’s descent from the golden Age of Heroes into its darkest hour". It promises to reveal "horrifying secrets of Westeros’ history" and "the true origin of the White Walkers".

When a disgruntled 'Game of Thrones' fan started an online petition calling for HBO to remake the show's final season with "competent writers", he ...
Lifestyle
2 years ago

How GoT actresses bid farewell to the fierce women of Westeros

Beyond jaw-dropping sets and costumes, incredible CGI, and a deliciously twisted plot that — up until recently — delighted the world, the ...
Lifestyle
2 years ago

IN PICTURES | 6 key 'Game of Thrones' characters, then & now

With the last-ever episode of 'Game of Thrones' about to hit our screens, we look back to the first-ever episode, which aired in 2011, to see how ...
Lifestyle
2 years ago

Follow these tips to have those all-important discussions in public without giving the game away, or risk getting slapped by those who haven't seen ...
Lifestyle
2 years ago