Is it twisted that we're baying for bloody series?

Face it, we like sociopaths and psycho-killers - or at least that's what our TV viewing habits show 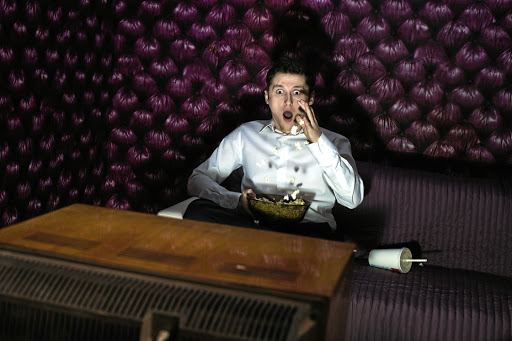 We have an affinity for violence, it would seem.
Image: 123RF/djedzura

We've become pretty immune to the splatter-happy violence that's a staple of television.

Game of Thrones with its stabbings, flame-grillings, beheadings and cross-bow shootings was a worldwide phenomenon watched by Millennials and geriatrics alike. It keeps company with shows like American Horror Story, Hannibal and even Ozark, which racks up murder upon murder as the series progresses.

Though Ozark, a show about a money-laundering family that gets caught between the local heroine smugglers and the Mexican drug cartel, is not as gruesome as the others, it starts with our hero's partner being tied up, questioned and shot at close range then shoved into a vat of acid.

But that's nothing compared to the big-top sadism on show for your viewing pleasure in American Horror Story with Twisty the Clown's murder scenes and the work of Bloody Face or the beheading in season 3. All this maiming, murdering and mutilating, far from sating audiences, seems to leave them baying for more blood.

One of Netflix's latest releases is the "torture" game show Flinch, in which people receive electric shocks or are dunked into cold water if they fail. It's the first of the streaming service's original game shows - and so far, fans seem pretty unimpressed. In fact, one Twitter user asked: "Is this show inside of a Black Mirror episode?"

A trailer for the programme shows people sitting in a makeshift barn holding out two rods inside circles of metal, while in front of them a small boy winds up a giant jack-in-the-box. Those who jump when the toy clown pops out are shocked when the rods make contact with the metal.

"I think it's called torture," said another tweet. When Netflix replied that the contestants had willingly signed up to be on the show, the user amended his comment to "Oh, consensual torture then."

WATCH | The trailer for 'Flinch'

There are saccharine shows for sure, but they don't seem to be nearly as popular as the gore and killing that we can tune into nightly from our living room couches.

Marie Kondo will spread her goodwill as she teaches you how to declutter, or you can be inspired by Bruce Springsteen's life story as he performs it live on stage in Hollywood. Brene Brown will call you to courage or you can follow comedian Rebel Wilson's journey to love in the cliché-driven rom-com Isn't It Romantic, but these shows are the exceptions to the blood-and-guts rule, the shows that spike the ratings.

We like sociopaths and psycho-killers - the more barbaric the character, in some series, the more likely they are to succeed - unless of course they are just pure evil. We hate Ramsay Bolton in GoT for "dismembering" Theon Greyjoy and raping Sansa, but we cheer Sansa on for having him torn limb from limb by his own starving canines.

GoT viewers will have witnessed - among countless acts of rape and incest (sometimes together) - children hanging on the walls of Winterfell, a pregnant woman fatally stabbed in the uterus and an incestuous royal affair witnessed by a boy who is then tossed from a tower - not to mention the burning alive of an entire city.

As season 8 gears up for what will invariably be the most epic battle in the history of 'Game of Thrones', we look back at some of the most memorable ...
Lifestyle
3 years ago

Why are people enjoying such graphic, shamelessly super-sick shock fests? There have been many studies. One often cited is a paper by Jeffrey Goldstein of Utrecht University, The Attractions of Violent Entertainment, which considers the role of sensation-seeking, the justice motive and social control in entertainment.

Goldstein posits that violence mostly appeals to adolescent males who use it as a "rite of passage, a chance for young men to test their mettle and flirt with taboos". Goldstein concedes that girls like violence too - but says they tend to react differently, by looking away, while boys "distance themselves emotionally from the action by commenting upon the special effects and how they were done".

In my experience, though, everyone I know, if they're honest with themselves, enjoys watching some violence.

Psychologist Barrie Gunter says our fascination with pain, death and killing can be related to our attempts to cope with our own mortality by means that we know are not real.

Goldstein also stresses the importance of context - "people want to experience in safety the kinds of emotions that are usually associated with danger".

But there may be another reason for the escalation of violence in TV shows. As our societies become safer - and studies show that the rate of violent crime has dropped in Western countries - a taste for vicarious violence rises. We simply like the thrill of it.

Has Jordan Peele's new horror 'Us' been horrifically overhyped?