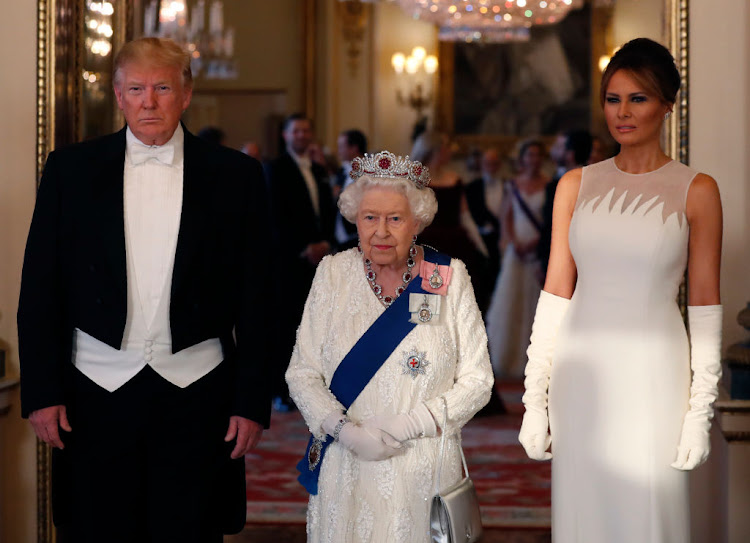 Between the British royal's famously expressive faces and Donald Trump's OTT personality, it was a state visit made for memes.

Wednesday marked the end of the US president's official three-day visit to the UK where he, together with his wife, Melania, and some of his children, hobnobbed with the likes of Queen Elizabeth, Prince Charles and Camilla, Duchess of Cornwall.

On Monday Trump tweeted, "London part of trip is going really well. The Queen and the entire Royal family have been fantastic".

However, some social media users weren't convinced that the royals were as enthusiastic about spending time with Trump as he was with them:

“And then I told him that all the 75 guest bedrooms at the palace are undergoing renovations.” #TrumpUKVisit #USStateVisit pic.twitter.com/cMyea1bPkw

Camilla's wink saying "the cling film is on the bog lads, listen out" https://t.co/ABQFXQDEPk

Others poked fun at Trump's wardrobe choices and, of course, his infamous hairdo:

How it looks online versus how it looks when you try it on. pic.twitter.com/DuPSuCZg7c

The First Lady's attire was also in the firing line. Some thought Mrs Trump saw the trip as a chance to play dress up:

#DonaldTrump #melania Nice of the Donald to bring the Airforce 1 Trolly Dolly out to stand on the steps with him pic.twitter.com/J2zGKujTng

Melania cosplaying as Rose DeWitt is a mood pic.twitter.com/U3CNcYunSd

One is a prostitute who fell on good times when an old rich guy picked her up. The other is Julia Roberts in Pretty Woman. #TrumpUKVisit #Trump #Melania pic.twitter.com/JQS1XfDVSx

#Ivanka Hello darling, I see you’re picking up on the ages old British tradition of knotted hankies on the head. pic.twitter.com/qRPIpCoHSU

But it was the creepy way she and her husband, Jared Kushner, stared out of a window at Buckingham Palace that really captured the internet's imagination:

The ghosts you see when you look back at the haunted house you’re escaping. pic.twitter.com/UZAw4OH5zj

Regardless of whether the royals were pleased to spend time with the Trumps or not, we're certainly glad they did — the trip gave the internet lots to chuckle about.

From bouffant to comb-over: Donald Trump gets new huuur

The Trump's hair got a do-over. You likey?
Lifestyle
2 years ago

Archie Harrison Mountbatten-Windsor may only be a few weeks old, but it seems the little cutie may already have his first royal tour booked.
Lifestyle
2 years ago