The King talks to Thembalethu Zulu about adjusting to his new normal, fatherhood and what he loves about our country 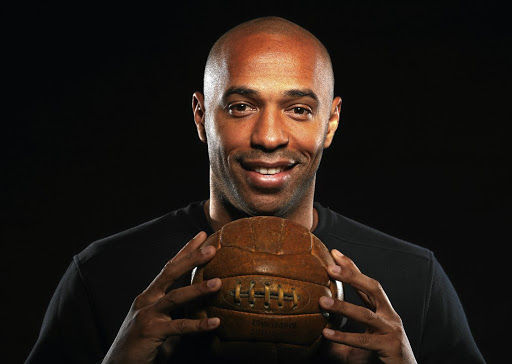 What do you ask one of the world's best footballers when you have only five minutes with him? Do you panic and ask what his favourite colour is? Or go more highbrow and ask his thoughts on the state of football in the age of technological refereeing interference?

It doesn't matter when he walks in, cool as you've imagined, better looking than what you dreamt as a drooling teenage fan, and more tattooed than was revealed during his mercenary Arsenal days, when his long-sleeved soccer jersey and gloves ran chills down the spine of most opponents.

It is immediately clear why Thierry Daniel Henry, first of his name and greatest of the Arsenal gods, earned the moniker The King. The man who has been immortalised with a statue at the club where he remains the top goal scorer even years after his departure, is statuesque, even in real life. He is easy-going and down-to-earth as he greets. The clock starts ticking down from five. So I shoot my shot. What is the best thing about being Thierry Henry, I ask?

He exhales sharply, shrugging slightly. He's about to join me in our five-minute marathon, and luckily he's as pacey with his speech as he was on the field. "Wow, I don't know. Errrrr. I guess you get to travel to South Africa, meet people and see the Champions League with Heineken," he says jokingly. I've watched numerous interviews. He's always been funny. Tick.

Soccer player Hector Bellerin is the style icon we deserve

Henry is in SA as part of beer brand and heavy football investor Heineken's Unmissable campaign. He has flown in to watch the Champions League final at a special screening with fans.

"I think one of the most important things is maybe to be recognised for what you do with your passion," he says, briefly pausing. "I think that's something that's very satisfying - when people recognise your work." He emphasises this last word. "Not your talents - your work. You understand what I mean?"

I do, but to be fair, even if I didn't I'd still have smiled politely, something I imagine he's accustomed to. "You try to explain to people that it's hard, that what they're seeing is hard work. Forget talent."

Having featured in two Champions League finals - one a devastating late loss at the hands of the team with which he would eventually lift the trophy, Barcelona - Henry is no stranger to big finals and the emotions involved while waiting in the tunnel.

"I've been on both sides of the final whistle where you end up losing it all, or you end up winning it," he says.

Winning is in Henry's DNA. He's a former World Cup winner, a two-time FA Cup winner, repeat golden boot recipient, and a member of the Champions League 100 club, having appeared in more than 100 matches in the competition. 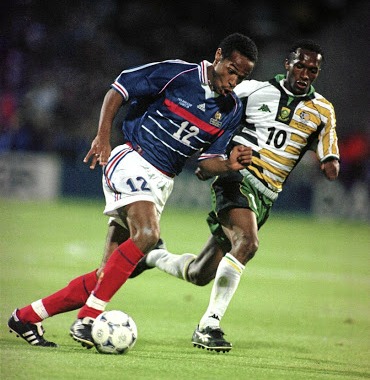 Thierry Henry of France tries to get past SA's John Moshoeu at the 1998 World Cup in France.
Image: Getty Images/Matthew Ashton

His ongoing love affair with the country is fuelled by his reception here. "People are very warm to me whenever I come here. What amazes me the most is the happiness on people's faces - they are always smiling here . happy. It's a little bit different in Europe - we're a bit more moody ."

Henry is fluent in a number of languages including Italian, Spanish and Catalan, but he admits to not picking up any local words yet. "To be fair, every time I come here, people speak English to me. When I went to the World Cup we were in a hotel in Knysna and there was a woman speaking. You know, when you do ..." he pauses to demonstrate his best efforts at making click sounds, "but you know, they were talking with it! How do you speak and click at the same time? That's a skill and a half."

It's shocking to think that the man who is seen as a footballing god by many would struggle at anything, even if it's an unidentified language from 13,421km away from his native Les Ulis, Paris.

"If I play [cards] with my son now, I gotta win because who is going to give him anything? My girlfriend will say: 'You gotta let him win.' No. That's not the plan," he says. "That's how life is. Nobody is going to give you anything in life. You have to go and get it. I was never afraid of that and that's how you succeed in life." 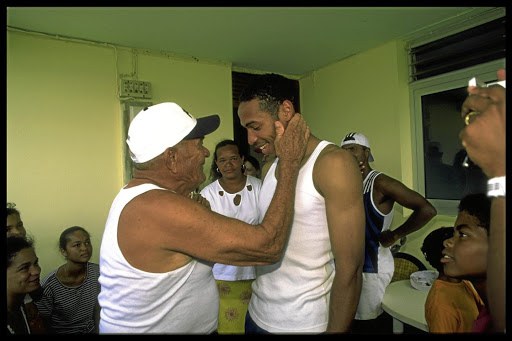 But he admits that, since having children, "it's not about you anymore", something his father prepared him for. "My dad told me everything. My dad said: 'Oh, this is going to be hard. You won't sleep. They are gonna be a pain - obviously he was talking about me," he chuckles.

After years of being on the road, playing or coaching, Henry is adjusting to a new normal. So what does he do in his downtime? "I love basketball. So I try to see some basketball games. I try to read. Right now obviously being out of a job I try to have time with the family, which is kind of weird," he says. "It's not something that I usually do because I'm always busy. The normal for normal people becomes unnatural for me .

"When you stop a career, suddenly you are home. And then you go into coaching and everything, and [I'm] waiting for a job now, as you know. It's kind of weird. but that's what I'm doing at the moment."

Beards, abs, penis size ... today's man has a lot to worry about when it comes to how they look
Lifestyle
3 years ago