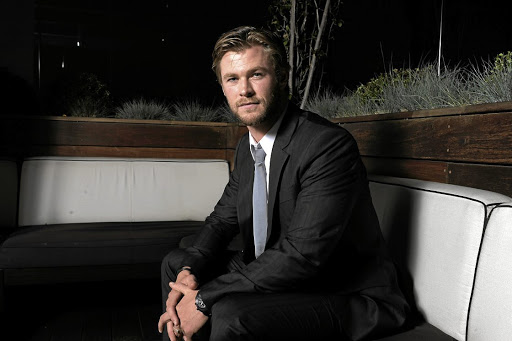 "How would I describe an alien?" asks Chris Hemsworth while in Bali promoting Men in Black: International, his iridescent blue eyes sparkle in a surf-tanned face.

"My brothers kind of fit into that category. My kids, occasionally, and myself. There were a few nights where I can't remember what happened, which could have been alcohol, or it could've been alien encounters wiping my memory - it's probably aliens, I think. I might even be one, but we'll, hopefully, keep that a secret."

That easy humour is the cachet of the eldest of the Hemsworth sons (Liam and Luke are also actors), it lets you know that despite the towering height, casual muscles that flex unconsciously as he gesticulates, he's just a down-home bloke from Australia.

He has delivered critical (Rush) and commercial success (the Avengers series), and elevated Thor to a comedy rather than a mindless superhero flick. He is reteaming with Tessa Thompson (his partner in crime in the most recent Thor movie) for the rebooting of the Men in Black (MIB) franchise originated by Tommy Lee Jones and Will Smith.

Liam Neeson and Emma Thompson also star in this comedy about protecting the world from aliens and wiping the minds of humans who encounter extraterrestrials. Just like jazz, after playing with the structure he returns to the script.

I've been asked if I believe in aliens. The optimistic part of myself would like to say yes

"For this film I've been asked if I believe in aliens. The optimistic part of myself would like to say yes, just because it's kind of exciting to think there's something else out there, to think that we're not alone."

Hemsworth hasn't been alone since marrying Spanish actress Elsa Pataky almost a decade ago. His Instagram account is full of lazy days on the beach with his children and photos of him and Pataky looking happy. His conversation spontaneously references his family, and unlike most stars, he's not averse to heading into the personal.

"What do I do that annoys her? I'm perfect, so nothing," he laughs, then quickly adds: "I can't wait for you to ask her that question and she'll just give you a list of things ... Going on press tours is a challenge - trying to find the balance of working and being with family. What annoys me about her? If she's listening, nothing annoys me about her." He pretends to call out to an unseen audience: "Got to make sure there is a place for me in the bed when I get back."

He shrugs and finally answers the question. "Probably if I surf a little long and stay out a little late from time to time. Usually because of traffic, though."

Dressed casually in chinos, a white collared shirt unbuttoned chest deep in the balmy heat, the cuffs rolled back revealing the heavy Tag-Heuer watch, finished off with black sockless slip-ons, he owns the "comfortable in my own skin" fashion-innate image.

WATCH | The trailer for 'Men in Black: International'

He had a bit of an awkward moment as the watch his character wears in MIB: International is a Hamilton Ventura, and he's been affiliated with Tag-Heuer since director Ron Howard gifted him one during the filming of Rush, the Formula One biopic in which he played racing legend James Hunt.

We ask women about style all the time and since the title is Men in Black I float a question about fashion, thongs and shorts vs suits. The press corps immediately start to snicker at the word "thong", thinking g-string. I'm flustered, but he understands what I'm saying: "I like a beach thong."

He glimmers a grin as I squirm: "For myself." Laughter ripples through the room, then he rescues me. "You mean flip-flops, right?" And launches into a story.

"My dad has a pair of leather flip-flops. He was in LA where thong means something entirely different. He was checking out of a hotel while I got our bags, and as I got out of the elevator he called across the lobby to me: 'Mate, I've just left me black thong in the room. Can you go grab it?' (laughter) The entire lobby reacted and I was like, 'Dad, that means something different here.'"

He grins and his eyes dance, looking like a true movie star and says: "But I like thongs - on your feet. And what am I most comfortable in? Shorts, a T-shirt."

He is a surfer, after all.

For six-year-old Alex Taljard, from Cape Town, there couldn't have been a more exciting visitor at her London hospital bedside.
News
2 years ago