Weeks after he made world headlines as the first lion to have radiation treatment in a human clinic, Chaos is well on the road to recovery 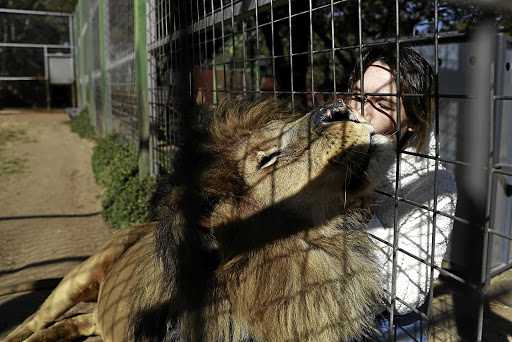 There was a whiff of lavender and a trail of grass and straw in the radiation wing of a Pretoria hospital. These were the tell-tale signs of the arrival of the hospital's big cat patient, Chaos.

Chaos is the 16-year-old lion who made headlines around the world this autumn as the first lion to undergo radiation treatment in a human clinic for two cancerous lesions on his nose.

He made his four weekly visits to the Mediclinic Muelmed in Pretoria darted and in happy slumber - also smelling like a garden in bloom because his human mom, Matty Van Eck, insisted on slathering him with scented ointment while he was out for the count.

"The lavender helps keep the flies away," says Matty, who's known the 270kg king of the jungle since he was a nine-day-old new arrival at her and husband Eddy's Lory Park Zoo in Midrand.

In truth, the ointment was also a salve for Matty - it kept her distracted from her anxiety, seeing Chaos under anaesthetic and being prepped for his sessions.

180 years later: the day the lions returned to the Karoo

Samara Private Game Reserve near Graaff-Reinet recently released two lions into the reserve - the first of their kind in the area in almost two ...
Lifestyle
3 years ago

The treatments all started tensely enough, with Chaos's roars of fierce discontent the minute he spotted wildlife vet Dr Katja Koeppel arriving with her dart gun. Koeppel, who's also a senior lecturer in the University of Pretoria's veterinary faculty, jokes that it's ruined their 10-year friendship forever.

Koeppel, her veterinary-student team and zoo staff would race to hook up Chaos's drip, intubate him and strap everything in place with bandages and even super glue if necessary.

After an examination by Koeppel (and an application of the lavender ointment), it took eight men to lift Chaos into his transportation crate for the 35-minute drive to Pretoria.

It was a mix of trepidation and excitement for the student who volunteered to monitor Chaos in the crate. Darrias Daniels took those trips with extra ketamine in his pocket, a walkie-talkie and Koeppel following in the bakkie directly behind.

"It was really intimidating and scary, but you're also prepared if he starts to wake up," says Daniels. He also had to reassure shocked roadside vendors and motorists once they realised they weren't seeing a mirage of a man in a crate with a lion, on the N1.

At the clinic, as he was wheeled in like a human patient, Chaos was met by his radiation oncology team - and onlookers snapping photos of the spectacle. Chaos is so big he couldn't fit on the radiation table so he was positioned straddling a metal gurney with his hind bits drooping off. 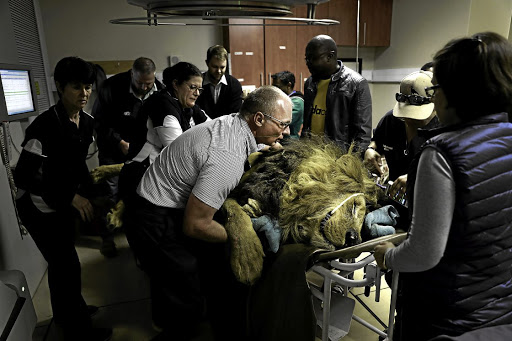 Chaos shortly after being sedated, surrounded by his medical team at the Mediclinic Muelmed in Pretoria.
Image: Alon Skuy 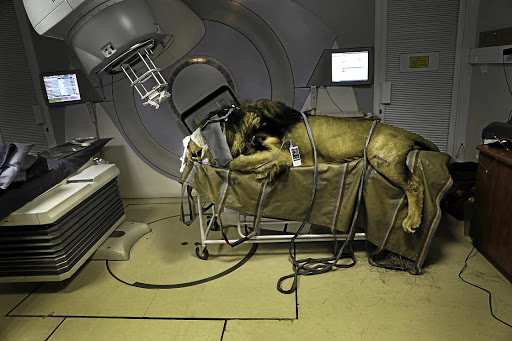 Chaos in theatre at the Mediclinic Muelmed in Pretoria. He is so big that he couldn't fit on the radiation table.
Image: Alon Skuy 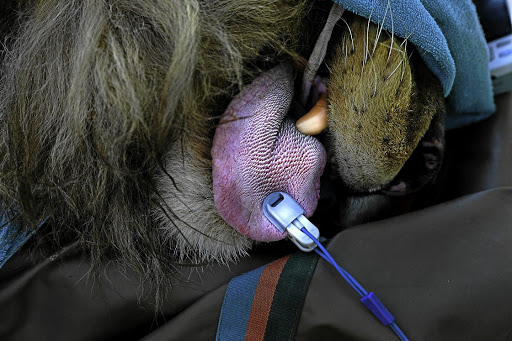 Chaos's vital signs were monitored by a sensor on his tongue during his cancer treatment.
Image: Alon Skuy

Two weeks after his final treatment and back at the zoo, Chaos seems none the worse for wear over the media attention, the dreaded dart gun or even the effects of the radiation treatments.

The once-angry, red spots are now a healthy pink and his skin has smoothed out. The pigmentation on his nose may not return to its original black but it's a good prognosis overall, says Matty.

"Who knew you'd become so famous, hey boy," she says, crouched at the lion's enclosure, her arms reaching in to encircle the massive feline. Chaos closes his eyes in blissful affection, nudging up against the fence and listening to her soothing coos.

"You're seeing the true Chaos now," she says of the big softie who's padded over and settled down in anticipation of some TLC. Matty and Eddy are practical about humans keeping their distance from zoo animals. They're born in captivity and are accustomed to humans but they're not pets and they still have killer instincts.

"Once you introduce an animal to its mate you don't go into the enclosure again," says Eddy, who started the zoo in 2000. But their history together is something unusual.

The Van Ecks hand-raised Chaos. He slept in their house and joined them for walks in nearby paddocks, back when Chaos was a cub and Midrand was more veld than peri-urban overspill. Matty calls him her "boy with the sweet eyes".

Photos of Chaos hang on the walls of the family's lapa. There's one from when he was a cub, sleeping on Matty's chest like an oversized housecat, and another of him as a juvenile sharing a bench with Matty's mother, Annie Meyer. And in the Van Eck's garage, the car's number plate is Chaos's name. 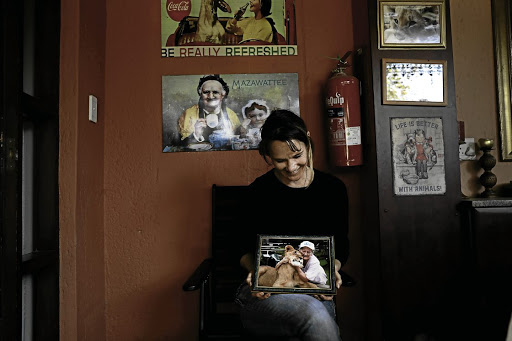 Matty Van Eck, who raised Chaos, poses for a picture with an old image of him and her mother, Annie Meyer.
Image: Alon Skuy

This bond made it easier to decide on radiation treatment in a human hospital, a costly necessity because his lesions were too close to the bone to be surgically removed. The bills have racked up to well above R50,000.

"Touch wood we never have to go through this again; Chaos has gone through so much, but we had to consider his quality of life," says Matty.

Today Chaos lives in the part of the zoo for "pensioners" with his mate of 14 years, Tequila - she's 17 years old. It's essentially the Van Eck's back yard and the benches at the enclosures are where the Van Ecks sit and visit. The animals live out their retirement away from the public and the lions could live till their mid-20s.

Eddy says it's like taking care of a family member and it's also part of responsible zoo ownership. Covering medical treatment, health and safety, adequate enclosure size with mindful design, enrichment and conservation are part of best-practice standards.

Koeppel, who makes weekly visits to the zoo, says it's behind the scenes, what the public don't always get to see, that is where ethical zoo management is measured.

"You know he's not feeling alright when he doesn't want to come to eat. It's like when your child doesn't want to talk to you," says Ngoveni, who stops for a chat after having prepped and weighed out horse meat and chicken for each of the zoo's big cats.

Ngwira adds: "The animals can talk to us because we've known them a long time."

The keepers also apply sunscreen on Chaos's nose every day now, through the fence with an extended applicator.

Koeppel explains that, at six weeks after his final treatment, Chaos will be reassessed but his blood work has shown no signs of organ strain from four sessions of anaesthetic - the biggest concern for older animals.

Zoo visitors have been asking about the famous lion, for whom they're all rooting. Matty promises to make regular updates on their website. Matty also concedes that, as an animal in captivity, Chaos's story always invites controversy. She has no easy answers to how we humans have inverted the natural order of things. She also has no easy answers for how the Van Ecks' and Chaos's bond came to be a love story.

Lucia Makhura sums it up best, maybe. Makhura was one of Chaos's radiation therapists at Muelmed. "When I started working here I did think it was funny when we had people bring their cats and dogs - and once a chicken - for treatment. Then you realise they're also our patients - like Chaos was our patient.

After spending their lives in a war zone, two lions are on their way to their ancestral home in Africa.
News
3 years ago

WATCH | From king of the jungle to common criminal: Lion spends night behind bars

The lion which escaped about a month ago from the Karoo National Park spent Wednesday night behind bars.
News
3 years ago