Stab wounds are best cured in the sea. Sleep on your surfboard to keep it safe at night. This is some of the hard-won wisdom of homeless youngsters who've found a sense of self-worth through learning to surf with the charity, Surfers Not Street Children 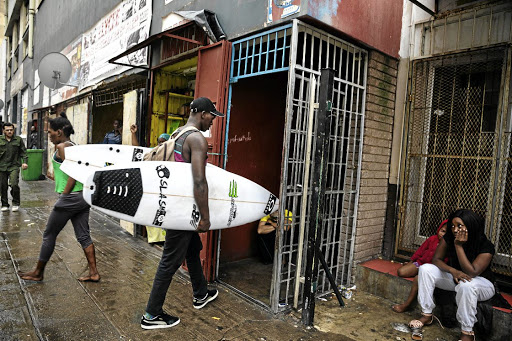 Surfing has helped to get William Zondi off Durban streets.
Image: Ilvy Njiokiktjien

Years after William Zondi, 22, ran away from home, his father recognised him on television, and learnt where he could find him: off a Durban beach, where he surfed every day.

"Everyone in the water came out, and told me, 'Go to your dad'. But I said, 'Guys, he is not my dad. He never showed me love'," says Zondi, who refused to go home with his father.

"When I see him, there is no happiness for me. Only my mum used to love me." Zondi's mother died when he was seven years old. The boy was so unhappy living with his father and new stepmother that he boarded a train not knowing where he was going. "I saw beautiful lights in Durban, and decided to get off there," he says.

It was the start of a rough life on the streets.

SLEEPING ON A SURFBOARD

"As I jumped in the water, everything I was thinking went out of my mind. I felt free," says Zondi. Being introduced to surfing by street children's activist Tom Hewitt MBE, who founded Surfers Not Street Children (SNSC) in 2012, gave him something positive to focus on. "I started loving that talent." But his life was by no means "all's well that ends well" from there.

The scars on his back and the 9mm pistol he owns tell their own story. "I have to have a gun to protect myself," he says. Sleeping on the streets made him easy prey. "You wake up in the morning and you have no shoes left. The bigger guys take your money, your clothes, everything."

Chasing the wave: 100 years later 'The Berg' is still the surfer's corner of note

Like all great stories, this one started with a boy and a girl - well, two boys and a girl to be exact
Lifestyle
3 years ago

Once he got his first surfboard, he would sleep on top of it. "On the streets, they used to steal our boards."

When he was stabbed he would rush into the sea instead of to hospital. "The salt water burns, but then it closes very quickly."

South Beach was once reserved for white people. Zondi and his friends didn't get a warm welcome there at first, and kept their distance from the white surfers. "But then they saw me doing big sprays. That's when they knew: blacks really like this too, and they called us over." 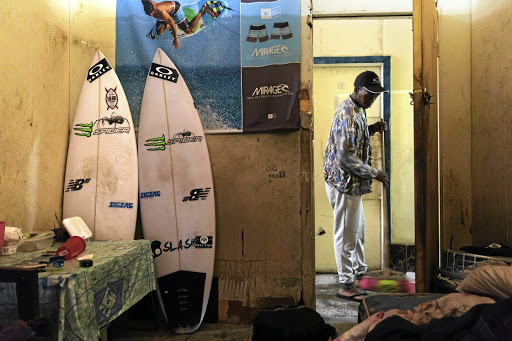 It was surfing that made him stop sniffing glue, wanting to become stronger so he could handle bigger waves. "And that's how I became fit, became who I wanted to be," he says, proudly pointing to his shoulders, muscular from hours of paddling.

But, lacking other income, he and his friends still resorted to crime to afford food and a place at the shelter. "We just walk and see who are the ones with the big phones.

He feels bad about it, but he doubts he can ever go back to school and find a job, as he doesn't have any papers. He would still love to learn how to read and write, though, even if it's just to fill out the forms at surfing competitions. "Now I have to call one of my white friends. Then I could write my own name."

THE SURF CLUB AS A SAFE HAVEN

"I wanted to get air," says Nonjabulo Ndzanibe, 21, explaining why she ran away from her unhappy childhood home to Durban. "I just needed space for myself."

Having grown up with a distant father - who spent part of her youth in prison - and a mother who she didn't feel loved by, it seemed like a welcome escape when a friend invited her to come stay in Durban.

Little did she know that her friend's sister - with whom they were staying - was working as a prostitute, and expected Ndzanibe and her friend to start bringing in money as well. "If we didn't come back with money, she would slap us."

Some time ago I had a job at a clothes shop. But after two months the person I was working for said that if I wanted to continue, I had to sleep with him

Alone in an unknown city, afraid to go back home, Ndzanibe started roaming the streets. Sometimes she made money helping the police clean up car crash sites. At other times, when she didn't have a boyfriend to provide for her, she would sleep with random men to afford a bed in a night shelter.

"That was hard, because sometimes I wouldn't even like that person, but I needed the money."

The pressure to have sex in exchange for money, jobs or favours is an everyday reality for South African women in a vulnerable position like herself, she says.

"To get what you want, you have to sleep with someone, they say. Some time ago I had a job at a clothes shop. But after two months the person I was working for said that if I wanted to continue, I had to sleep with him."

She refused to sleep with her boss, walked away and lost her job. But she says she couldn't have been so bold if it hadn't been for an encounter that changed everything. One day, as she was walking along the beach, someone introduced her to a surfing club for homeless children. 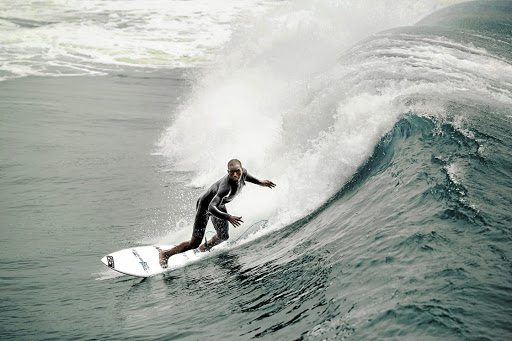 They offered her a place to stay. And maybe even more important, she found a family there, one that supports her in more than material ways.

"Last week I told Cikie: 'Mummy, I need shoes', because I only had slip slops. But she told me to just wear what I have and make it work. So I went out with those flops and I made it work, because I was proud of myself."

SNSC managed to track down Ndzanibe's aunt, who agreed to let the young woman live with her and get her back into school. Though she is now off Durban's streets, she comes to the beaches to visit her surfing buddies and mentors.

• For more info on Surfers Not Street Children, or to donate money, go to surfnotstreets.org

The event will end next Sunday with a Development Surfing Day, during which young surfers from Surfers Not Street Children, KwaZulu-Natal's iLembe Surf Riders, Ubuntu Learn to Surf and Swim Club and Sisonke Surf Club will take to the waves in a fun tag team event.

The ambassador for the Ballito Pro, action sports presenter and surf guru Sal Masekela - who is also the son of South African jazz legend Hugh Masekela and founder of Stoked Mentoring, a nonprofit organisation that uses action sports to empower children from underprivileged communities in the US - will join the young surfers in the warm Kwazulu-Natal waves.

Street children's activist Tom Hewitt and his team will also be in Willard Beach waters next Sunday to share their mentoring experiences with the other clubs.

The Surfers Not Street Children NGO is mourning after the tragic death of 6-year-old Mxolisi Gwamanda, who was stabbed on Tuesday.
News
3 years ago

Everyone has a role to play in solving SA's hunger crisis. And for just 90c, FoodForward SA can get a quality meal of surplus food to someone in ...
Lifestyle
3 years ago

Almost exactly a month before their royal son Archie was born, the Duke and Duchess of Sussex made an announcement to help thousands of children ...
News
3 years ago