Wine farms to wheels, TJ Strydom tracks the spending habits of Mzansi's superwealthy — and new patterns in how they top up the coffers

South Africa has about 39,000 high-net worth individuals - these are millionaires in dollar terms. Think of them as people with assets of about R15m after stripping out all their debt. That's Loftus Versfeld filled very nearly to capacity - with dollar millionaires!

But among them are those with better seats in the house. About 2,000 have net assets of more than R150m, says a report by Afrasia Bank and New World Wealth. And nearly 100 are sitting on more than R1.5bn.

Only a few of them are billionaires in dollar terms, but it's safe to say that most of their children's children, barring a spectacular disaster, will still be fabulously rich.

This kind of wealth has three parts to it - building, displaying and maintaining.

Let's start in the middle.

Wealth, in SA as in most parts of the world, is not worth much if it can't be displayed. This can be subtle, or it can be in your face.

Wealth, in SA as in most parts of the world, is not worth much if it can't be displayed

Building something with your name on it is one option. Insurance tycoon Douw Steyn did this with his property development in northwestern Johannesburg with the not-so-subtle name of Steyn City. Gauteng's spa and tasting menu crowd will know that Steyn's erstwhile private home, the Saxon, was also not the most humble abode.

It was at another Steyn property - his game farm in the Waterberg, Limpopo - that Nelson Mandela spent months editing his Long Walk To Freedom as a guest in the 1990s. This is a more subtle display of wealth - the company one keeps.

The Gupta brothers spent quite a bit of time with South African government ministers, if the past few years' media reports are anything to go by.

Johann Rupert, head of the Remgro and Richemont empire, hangs with big names in world golf. His friendship with Ernie Els is no secret, and his Twitter handle is a nod to that golfing passion - @cutmaker.

Passions are a good place to park some money. In the same vein that Russian and Middle Eastern billionaires like buying sports teams, mining magnate Patrice Motsepe invested in soccer club Sundowns in 2003 and bought all of it the next year, renaming it Mamelodi Sundowns.

Motsepe, whose African Rainbow empire has moved beyond its mining roots into financial services and industry, more recently pushed into another area associated with the world's wealthy - philanthropy.

By joining the Giving Pledge, a movement popularised by investment legend Warren Buffett and software pioneer Bill Gates, Motsepe in 2013 in effect promised to give most of his wealth to charitable causes over his lifetime.

Philanthropy is also a display of wealth, especially if you have a "foundation" that carries your name.

But some are not so keen to give it all away. Christo Wiese, who made his money from Pep Stores and Shoprite and lost quite a bit of it when Steinhoff's share price collapsed late in 2017, was asked about the Giving Pledge in an interview shortly after Motsepe's big move. A man from the Northern Cape, Wiese said he is too Calvinistic to give his fortune away - he styles himself as a man who does his giving through the jobs his companies create.

But he has been giving back through the transfer of title deeds, supporting efforts by the Free Market Foundation to convert apartheid-era government-owned rental properties into full ownership for the tenants.

Ironically, Wiese has only one title deed to his own name - that of his "bungalow" on Clifton's spectacular 4th Beach.

That's not to say Wiese hasn't dabbled in property.

He was the man behind the historic Lanzerac wine estate in Stellenbosch for more than two decades. In the early 2000s he added Lourensford near Somerset West to his wine farm portfolio.

The Ruperts, of course have a long-standing link to Fleur du Cap. And the family's collection of vintage vehicles is housed at L'Ormarins near Franschhoek.

But cars need not be antique to show deep pockets. In a new book, The Stellenbosch Mafia, Pieter du Toit tells how one magnate wanted a right-hand-drive Mercedes-Benz G63 AMG 6x6 - "a monster of a truck" that costs in excess of R13m - for his son. The individual ended up ordering 10 of these six-wheelers: it was the minimum order for the manufacturer to make a right-hand-steering model. He kept two for himself and filled up the rest of the order among well-to-do friends in the neighbourhood.

The wine farm is a very South African display of substantial wealth - fortunes made in other parts of the country often end up in vines and a historic Cape Dutch "opstal" perched amid the hills of the Boland.

Graham Beck may have made his fortune in coal, but his brand is now much more closely associated with the bubbles in Methode Cap Classique.

Donald Gordon started insurance group Liberty and his daughter Wendy Applebaum now chairs the foundation bearing his name. She also chairs her own foundation and has the DeMorgenzon wine estate in her portfolio.

Banking tycoon GT Ferreira, who was part of the stitching together of the FirstRand group, named his wine estate Tokara after his children Tomas and Kara. 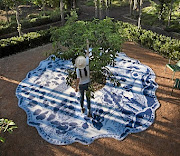 Others generally stick to the historical names. One good example is Koos Bekker, whose Babylonstoren traces its origins back a few centuries to when it was a vegetable patch for passing Dutch sailors.

Bekker's fortune is, of course, thanks to Naspers, the media company he headed and then transformed into a global internet business. While he was at the helm, Naspers made an astute investment in China's Tencent, now one of the world's largest internet businesses. At Babylonstoren, signs are displayed in Afrikaans, English and Mandarin.

But before it can be displayed or maintained, it needs to be built up. SA has ample opportunities to attain wealth by legitimate means, but the sources have changed over the years.

MINING IS SO LAST-CENTURY

Mining is so last-century. Yes, that is how Ernest Oppenheimer made sure his family name would forever be associated with wealth in SA. But the economy has transformed and many of the resources dug up 100 years ago have been recycled into other sectors.

The Rupert family started in tobacco in the 1940s, but soon branched out into wine and spirits and eventually into luxury goods.

Retail made the Ackerman family wealthy from the late 1960s onwards. This sector did the same for Wiese in the 1980s.

Over the past three decades financial services have been all the rage. Stephen Koseff built up Investec, Ferreira and old mates Laurie Dippenaar and Paul Harris established FirstRand, and more recently Jannie Mouton put the PSG Group - with its deft early investment in Capitec - together.

But wealth is only a shooting star if it cannot be maintained.

The latest fashion among the older money crowd in SA is sending the kids off to study how to eventually manage the family office.

Gone are the days when the family business would simply be taken over by the male heir. These days there are too many shareholders and corporate governance checks and balances. Junior does not simply walk into head office and take the reins. And over time the nature of wealth has also changed. If the rich have learnt anything from the stock market crashes of the past century, it is to diversify.

These days wealthy families look more like the asset managers managing the retirement savings of regular Joes. They have a portfolio of assets in several sectors. And usually a professional holding the reins. That professional could very well be a well-trained family member, but usually the heirs are off working the social and philanthropy circuits.

• TJ Strydom is the author of 'Christo Wiese: Risk and Riches'.