Paul Ash runs down to a Free State farm aboard a Suzuki V-Strom 250, through rain, on a bike that won his trust 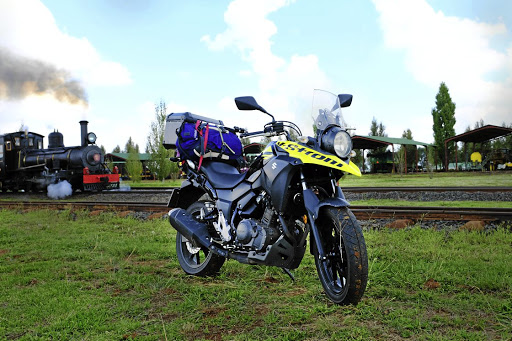 True confession: the night before heading off on a trip, anywhere, my sleep is layered with frightening dreams. If I'm awake and staring into the dark, I'm fretting about what the day will bring. You'd think, after two decades as a professional traveller, I would have the jitters under control. But I don't.

On this particular morning, the day starts with a shrieking wake-up at 3.30am. Shower. A jolt of coffee. Strap kit onto bike. Start. Warm it up. Gear on. Go.

It's quite a thing to head out alone on a freezing morning on a bike that I have never ridden before. But time was short. Ahead lay a fast weekend sortie down to the Free State to look at some steam trains puffing around a private farm railway.

The trip would be a chance to see if Suzuki's little 250cc V-Strom adventure bike might be the bike of my dreams.

The wake-up was fine, the coffee was sweet, dark and hot.

But I lost an hour as, with rising panic, I huffed and grunted to strap a tent, backpack and tripod onto the stepped seat behind me in such a way that I didn't lose my shelter somewhere between home and Ficksburg. I have made that movie before while chasing the setting sun on my XT500 on a lonely road in Zimbabwe, when a day of thumper vibrations loosened some webbing straps and lost me a bag of tools. Ah, did the sky above the road to Masvingo darken with profanity that blood-red evening…

It was gone 6am by the time the little Suzi and I purred onto the N3 at the Geldenhuys interchange and rode south. There was the usual maelstrom of wandering taxis, poorly driven SUVs and - as always - an ancient beat-up bakkie unencumbered by any battery chowing accessories such as taillights or brake lights. On the whole, it wasn't bad traffic for a Friday morning on the country's busiest national road.

Clear of the Germiston-Springs mishmash, I cranked open the throttle - and was pleasantly surprised to feel the bike shoot forward like a horse. To be fair, it was only a little horse - I was not expecting much grunt from a 250cc twin. Especially not one laden with an 85kg rider, a weekend's camping gear (including air mattress because I'm that sort of camper) and a sizeable top box that could double as an airbrake.

The water-cooled motor engine has proven itself a bulletproof in Suzuki's less-refined commuter bikes. It's high revving, which to someone used to slow-thumping singles like me, always feels a bit mechanically unsympathetic (8,500rpm at 120km/h, you say?) but the roar from the pipes was truly nice.

I'm over six feet tall so the standard windscreen could have been a tad higher to keep my head out of the slipstream but otherwise did a pretty good job.

Here's the good thing, though. That I was happy to set off on a predawn highway jaunt and then a weekend road trip on a bike I was riding for the first time says a lot about the little V-Strom's usefulness.

It felt planted on the road but still nimble. I settled down to the speed limit and ate the miles, passing the odd truck without any of the terrors that I have had on certain other small machines (such as the aforementioned XT500) when pulling such stunts as overtaking trucks required a witch's brew of balls, luck and a favourable gradient.

It was a pleasure to make time so early. Road trips, especially by bike, require an altered state, where you are both alive to every molecule of the world and its present dangers - ripples in the tar, a car ambling unannounced out of its lane, a stray dog playing chicken - while your mind ponders the mysteries of your life and the Universe and how long it is till you can pull into the 1 Stop and have a Wimpy breakfast (two eggs, hash brown, toast, sossie, coffee) and reflect on past, harder trips on worse bikes.

At Villiers we turned off for the road to Frankfort which begets the road to Reitz and then Bethlehem. This road is like the curate's egg - good in parts. There are long sections with no shoulder. There are kilometres of tar so gouged I wondered what beast could have left such scars. There are potholes, mostly shallow but others as deep as mineshafts. 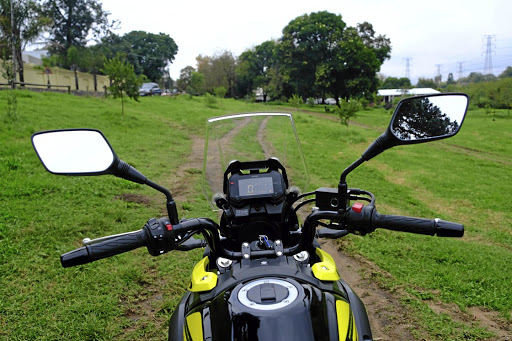 The Suzuki V-Strom 250 will not give you terrors while overtaking.
Image: Paul Ash

There were few cars, for it was too early in the day for the Joburg to Clarens exodus.

There was rain. By then, I trusted the V-Strom completely. We shot into the wet, cold front that would scour the eastern Free State. I hunched a little more in the seat and gripped the tank with my knees and rode on. In the middle of nowhere, I passed a black mongrel dog, trotting with purpose on the other side of the road.

The rain stopped after Bethlehem and the sandstone buttresses glowed wetly in the grey light.

The road to Ficksburg is one of the most beautiful in the land, lined with poplar trees dressed in autumn gold, and sandstone buttresses and, over there, the rising flanks of the Maluti Mountains. It is a road made for the little V-Strom.

As it turned out, the rain washed my tent away. The steam trains were great but more rain was promised. Usually that would have been a bummer but not this time.

I headed back to The Smoke, rolling through a sun-drenched Free State on one of the sweetest bikes I have ever ridden.

The BMW C 400 X is stylish with impressive standard features, but it may be a little pricey for the young urban commuter
Lifestyle
3 years ago

Royal Enfield Himalayan: a motorbike that's up for ANY adventure

The 2018 BMW G 310 GS offers more flexibility than the street-going G 310 R, which means you can take it anywhere, writes Thomas Falkiner
Lifestyle
4 years ago