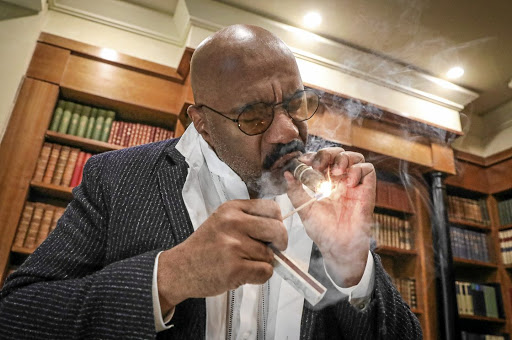 Famous funny man Steve Harvey must believe that smoking indoors is a joke. Here he lights up in his Joburg hotel, before wading in on the evils of social media.
Image: Sebabatso Mosamo

Steve Harvey lights a cigar and smoke fills the private lounge. He peeks over his amber-tinted glasses and complains that fame has become his prison.

Like all prisoners, he cannot leave the facility. This week, Mr Harvey (as he insists on being called) is locked away at Johannesburg's luxury Saxon Boutique Hotel.

"Fame now is an ugly business, there's almost no upside to it. You have no privacy. It's like living in a big, pretty prison. I'm staying here at this hotel, it's gorgeous. Guess what? I can't go anywhere. I can't go to the mall. I heard there's a really nice mall up the street. I can't go. I haven't been to the mall in years," he said.

The American comedian, author, radio and television host is one of the world's most recognisable celebrities, and regarded as the busiest man in entertainment.

The man who grew up in an impoverished neighbourhood in Cleveland, Ohio, may hate fame now, but he worked hard to achieve it.

In 1985, encouraged to perform at a comedy night, he did so well he quit his job. Later he was homeless, living in his car, using a cooler box as a fridge and public bathrooms to wash. Winning a national comedy competition in 1990 was his big break to appear on Showtime at the Apollo, but he could not afford the petrol to drive there. Years later, he hosted the show.

The simple discovery of your gift is the biggest game changer of your life. Stop trying to be what you see somebody else be

Harvey ended his 27-year stand-up career in 2012 and focused on hosting, writing and producing shows including The Steve Harvey Show, Family Feud and Little Big Shots.

"The simple discovery of your gift is the biggest game changer of your life. Stop trying to be what you see somebody else be. Be who you are. That discovery was the biggest change in my life, man. And it has given me a lifestyle far beyond anything I've ever dreamed of. You couldn't have told me 30 years ago that I will be giving a motivational talk at Botswana University. You couldn't have told me that 10 years ago," he said.

Harvey has a new dream, an African dream. After Ghana and Botswana, his next stop was Johannesburg to meet local television executives and visit the recording studio where filming will take place later this year.

He says he owes his vision to his mother, a Sunday-school teacher, who taught him Bible verses and the importance of having a dream, and who would buy a travel magazine every month. Because they were too poor to afford holidays, Harvey and his siblings could look at places in magazines and dream of going there.

"That's one of the reasons why I travel the world today, because my mother put it in my imagination. She started removing the cap on my thinking," he said.

Get your game face on!
TshisaLIVE
2 years ago

Although those travel magazines didn't feature Africa, Harvey always dreamed of coming here. With his NBC daytime talk show, Steve, coming to an end this year after seven seasons, he decided there was no better time to bring Family Feud to the continent. Harvey and his family will return to Johannesburg in October to begin filming.

Harvey quotes liberally from the Bible and jokes that he is part 'hood and part holy. His unholy side emerges with a discussion on social media. He begins banging on the table as he laments its evils. His biggest criticism of it is what it is doing to the comedy industry.

Harvey believes this generation of comedians aren't honing their craft because they're posting their material online as opposed to performing at comedy clubs.

"So these comedians are posting all this stuff online where they're funny as hell, then when you go see them live they ain't got no show because they haven't been in comedy clubs working; they've been on Instagram and Facebook posting," he said.

Another concern is that this age of outrage and political correctness is "killing comedy".

"You can't be funny no more. Nothing's a joke anymore. I'm offended. Wait a minute. It was a joke," Harvey said.

What isn't a joke is Harvey's passion for helping others achieve their dreams and staying motivated. But whatever you do, don't call him Steve. It's Mr Harvey.