Going by his estimation of his own career trajectory, director Quentin Tarantino has one more movie left in him. His latest film seems to promise many more 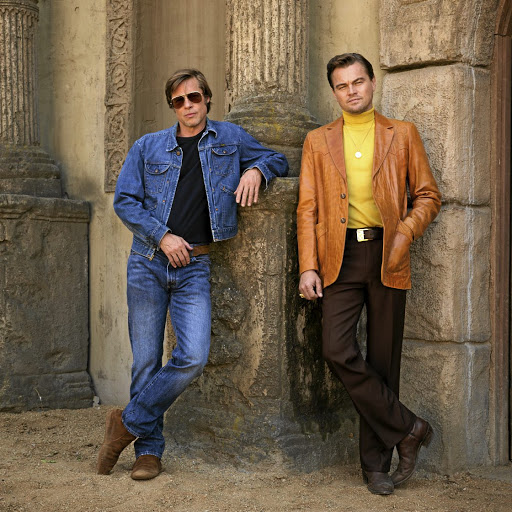 Brad Pitt, left, and Leonardo DiCaprio in 'Once Upon a Time in Hollywood'.
Image: Supplied

Quentin Tarantino is one film away from his planned final production. For years the director has said that after No 10 he'll retire. For his ninth outing, the maverick director has delivered a rollicking, revisionist gem that will convince you he still has enough in him for another 20 movies.

The anti-heroes of Once Upon a Time in Hollywood are once-popular TV cowboy actor Rick Dalton (Leonardo DiCaprio) and his faithful stuntman and gopher Cliff Booth (Brad Pitt).

Their charming bromance plays out in the increasingly long shadow of Dalton's fading name recognition as the hated hippies and new generation of American New Wave filmmakers encroach on their memories of the glory days of television and classic Hollywood.

Wheeler-dealer agent Marvin Schwarz (Al Pacino) lays things on the line and explains that Dalton's new and far less lucrative career as the TV cameo bad guy only serves as a means of ensuring that he won't be remembered (because all he's doing is allowing himself to serve as a symbol of how the new stars are better than the old school he represents). Rick comes out of the meeting crying like a man who's just reached a key breakthrough moment in a Freudian therapy session.

Luckily, as always, trusty Cliff is there to remind him that "You're Rick Dalton," and this seems to alleviate the cowboy's mid-life neurosis long enough to keep him on the bad-guy bit-part treadmill he's resigned himself to. He spends his evenings in his bungalow on Cielo Drive in the Hollywood Hills watching himself in various TV shows in the company of Cliff and a six-pack of beer.

WATCH | The trailer for 'Once Upon a Time in Hollywood'

The A-list partying of his new neighbours, hotshot director Roman Polanski (Rafal Zawierucha) and his starlet wife Sharon Tate (Margot Robbie) serve not so much as a source of envy for Rick as a last desperate chance. After all, if he's living next to the director of Rosemary's Baby, who knows what may happen if he gets a chance to introduce himself?

In Tarantino's reference-drenched, cultural touchstone-peppered version of history, Rick and Cliff are drowning their sorrows and spitting their venom at the influx of the hippies into their beloved town in the early months of 1969 on Cielo Drive.

This is the year that will see the end of the dreams of the '60s when in August Charles Manson's followers arrive to kill Tate and others at the house next door.

Without giving too much away it's enough to say that while the film lovingly and brilliantly recreates the era, there are some historical events that Tarantino doesn't strictly stick to.

The end of the film will leave you shattered, gobsmacked and wondering why nobody before has thought to have such disdain for something so firmly entrenched in the psyche of US history over the last half a century.

There are plenty of characteristically self-indulgent but charming Tarantino sleight-of-hand tributes to B-grade movie and television scattered through the film.

There's a controversial but enjoyable confrontation between Cliff and Bruce Lee (Mike Moh) and a visit to the Spahn ranch where the Manson family have set themselves up at the expense of blind owner George (Bruce Dern).

The daughter of the martial arts legend is unimpressed with the way her father is portrayed in 'Once Upon a Time ... in Hollywood' - and she's not ...
Lifestyle
2 years ago

Cinematographer Robert Richardson drenches his rich 35mm frames in the saturated sunlight of the mythical charms of California. There are plenty of forgotten and overlooked late '60s pop gems playing on car radios and home transistors to keep the music anoraks guessing.

It's a complicated and surprisingly touching character study of two men trapped in the past who, like the Western heroes Rick made his name playing, are ultimately faced with the final confrontation between the old and the new and must rise to the challenge.

Tarantino is 56 this year and Once Upon a Time is arguably his most restrained and delicate character-focussed film.

The easygoing rapport and affable charms of Pitt and DiCaprio's central relationship make Once Upon a Time in Hollywood's almost two and a half hours a breeze to watch.

That's not to say that the signature cartoonish violence is absent, but it takes time to explode and when it does you're left feeling that this film is indeed, as its title suggests, a fairy tale of a bygone era.

The film's twists move it from a Brothers Grimm memoir of the era told so poignantly in Joan Didion's seminal The White Album essays towards a version that's far more Disneyesque in its reactionary resolution.

It's a tribute to Tarantino's emotional growth as a master storyteller and director and it shows that while he's adamant that his next film will be his last, it would be a shame if his career ended with his rumoured plans to film a Star Trek instalment.

His own work is its own franchise and there's no need for him to hitch his star to another one.

Like Rick Dalton, Tarantino may be feeling the pinch of maintaining relevance in middle age, but this film demonstrates that he's certainly still got enough tricks in his bag to offer a clever and satisfying alternative to the franchise, remake, spin-off overkill that is the depressing face of mainstream movies today.

Quentin Tarantino stormed into Cannes Tuesday with 'Once Upon a Time In Hollywood', with critics at the world's biggest film festival hailing it as ...
Lifestyle
2 years ago

The stars were aligned for Brad Pitt and Leonardo DiCaprio to put their dashing good looks to use on big-budget films, but both Hollywood golden boys ...
Lifestyle
2 years ago