Melissa Willering as Nina and Wayne Smith as the older Benjamin in a scene from 'Fiela se Kind'.
Image: Supplied

I've always thought that historical dramas should be more prominent in SA cinema. Anyone who's spent even a few afternoons poring over the history books knows that SA is a place of haunted magnificence: colonial misadventures, cartographic odysseys, war and conquest, dislocation and authoritarian brutality, all set against the backdrop of one of the most picturesque landscapes on Earth.

From the ancient records right up to the modern archives of the 20th century: warriors and foraging nomads, sorcerers and crumbling empires, betrayal and assassination, the fashioning of the great passes from chunks of raw mountain, frontier mythology, Voortrekkers, the Mfecane, the underground cold-war revolutionaries. Apartheid, the flicker of ambiguous victory and its melancholic aftermath.

Yes, our history is as illustrious and blood-spattered as the best of them.

The Americans have their glorious Westerns, the Japanese their feudal sagas, and the Europeans their questing fables of sword and shield. Even Bollywood has produced its quotient of teeming cosmological oddities drawing on thousands of years of lore. So why is our own cinematic record so utterly impoverished by comparison?

Fiela se Kind is one such example of a film in the tradition of these historical dramas, adapted from Daleen Mathee's 1985 novel, and set in the gorgeous semi-wilderness of the Karoo in the late 1800s - where wind-crumpled aloes cling to the dry earth and mountain peak and snarling forest possess unspoilt sovereignty over much of the land.

The story begins with a family of coloured pastoralists living on an isolated farmstead ("Wolwekraal") on the other side of the Knysna woods. One fateful night, the mother, Fiela (Zenobia Kloppers), discovers a white-skinned child abandoned on her front stoep. She takes him in and names him "Benjamin", and the child grows up alongside her darker-complected brood of four other children, his true origins eventually becoming a neglected mystery.

Until one day, when a carriage comes clip-clopping across the lone pathway and two Afrikaner bureaucrats disembark, both dressed in funereal black garb, these emissaries of troubling news.

One notices the white child among this coloured family and demands that he be summoned before the Magistrate, despite Fiela's trembling protestations. And so the child is carted off by these arrogant officials, torn away from the family he grew up with. It's a real heartbreaker of a scene.

It gains most of its power from what we know that Fiela can't. That coiled within this episode is a terrible premonition: a portent of segregation, forced exile, governmental bullying, the splitting apart of families; in sum, the formalisation of these cold and cruel methods of domination exemplified best in the later apartheid state with its Group Areas and Population Registration acts.

From here the film goes on to chart two parallel stories. One revolves around the sorrows of motherhood as Fiela undertakes a journey to the magistrate's chambers to plead for the return of her adopted child. And the other involves young furrow-browed Benjamin (Luca Bornman/Wayne Smith), who grows up with his new family, the "Van Rooyens", rough-edged arme blankes who live on the verge of a lime-green bog with their abusive father.

The film spans about 10 years in the lives of the two families. It tells a very simple story, almost fable-like in its basic structure, but nevertheless, the director is able to summon moments of profound tension - racial humiliation and anger, powerlessness before the might of a thoughtless bureaucracy, and the portrait of a family life riven by these intrusions.

Seething within the details is the absurdity of racial classification and an invitation to the contemporary public: look upon this tormented past, this degradation and squalor are the twisted roots from which your modern life takes its nourishment. 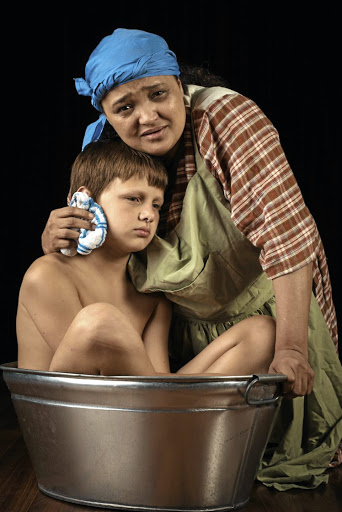 I am pleased to report that Fiela se Kind is a very watchable period drama: plain, elegant, and shocking up until the final twist. And I do recommend you watch it, even if just to register that mainstream South African cinema has come a long way since, say, 10 years ago, when even our major productions had a real shoestring quality about them.

This film is magnificently shot, with an eerie, brooding soundtrack and splendid acting all round. There are certainly some stylistic concessions: the Komoetie family is depicted as a stoic group, endlessly beaten down by Karoo dust and circumstance. They are almost placeholders, part of the changeless scenery within which Benjamin's bildungsroman is staged. Benjamin and his sister Nina (Melissa Willering), by contrast, are full of adventure, romance and vitality.

The film's last act also discloses a conservative ending, which squanders the film's potential themes of dislocated identity and racial ambiguity in favour of a simplistic, almost fairy-tale like alternative. But these compromises aside, Fiela se Kind is a good omen for great adaptations of our classic literary works.

Three women, two guns, one horse and the Karoo landscape stretching into infinity: SA’s first female Western by Jenna Bass has all these, plus an ...
Lifestyle
2 years ago

Going by his estimation of his own career trajectory, director Quentin Tarantino has one more movie left in him. His latest film seems to promise ...
Lifestyle
2 years ago

'The Red Sea Diving Resort': a slapdash retelling of a riveting real-life event

This true story has all the ingredients for a great movie, but Gideon Raff's film is flat and emotionally empty
Lifestyle
2 years ago