Through his efforts on behalf of Moutse village, doctor/philanthropist Hugo Tempelman accidentally brought the dazzling voices of the Ndlovu Youth Choir to the world’s ears 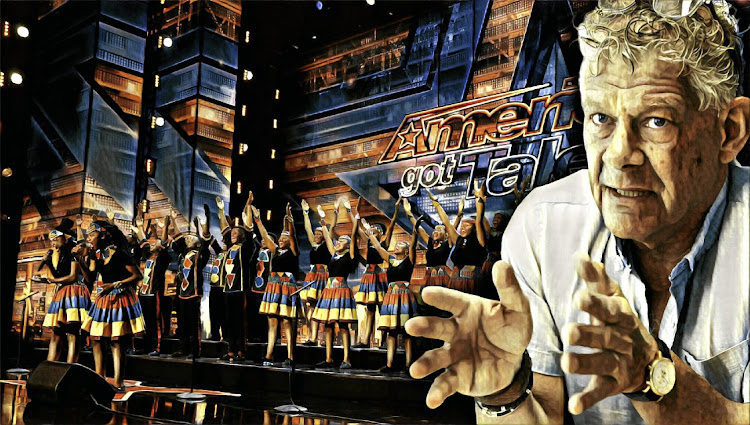 The Ndlovu Youth Choir got to the final of the US music show in September largely thanks to the efforts of Dutch doctor Hugo Templeman, right.
Image: Sebabatso Mosamo. Graphic by Rudi Louw

Hugo Tempelman speaks very fast in a Dutch accent, his English peppered with Zulu words. Listening to him requires special attention, and he stutters when he gets excited. In his Groblersdal office, his excitement erupts as he points to the posters covering his desk, made from a collage of newspaper clippings of the Ndlovu Youth Choir.

Tempelman, a doctor, is  CEO of the Ndlovu Care Group (NCG), the NGO that birthed the choir that had SA and the world on the edges of their couches this month as they progressed to the finals of America’s Got Talent. But the choir is just one small facet of the work Tempelman and his wife have been doing through their charitable foundation founded in 1994.

Evidence of their work is all over the Moutse area in Limpopo.  Billboards along the road  bear the NCG logo and slogans such as “Be a man not a fool, put a condom on your tool”, as part of the NGO’s fight against HIV/Aids. Among RDP houses with pit latrines and corrugated-iron spaza shops, several structures stand out: Ndlovu Medical Centre, the sports centre and the Miracle Theatre.

“It’s not because Ndlovu wants to be prominent but because we have identified so many illnesses in that community  [which]  we find solutions for,” Tempelman says of the gleaming clinic.

“We are happy that we can enable the community to stand on its own, because it’s my religion that nobody needs to suffer.”

Despite losing out in the final of America's Got Talent, the Ndlovu Youth Choir received a prize from their home province just days after they landed ...
News
2 years ago

One could say that Tempelman founded this “religion” in the 1990s, when he came to SA from The Netherlands. His first post was at the Philadelphia Hospital in Dennilton, Limpopo, where he lived on the premises for four years.

The hospital, which is still operating, is a 10-minute drive from  Moutse village, home to the Ndlovu choir members and their families. It was during his time in Dennilton that the young, blue-eyed Dutchman fell in love with the community. 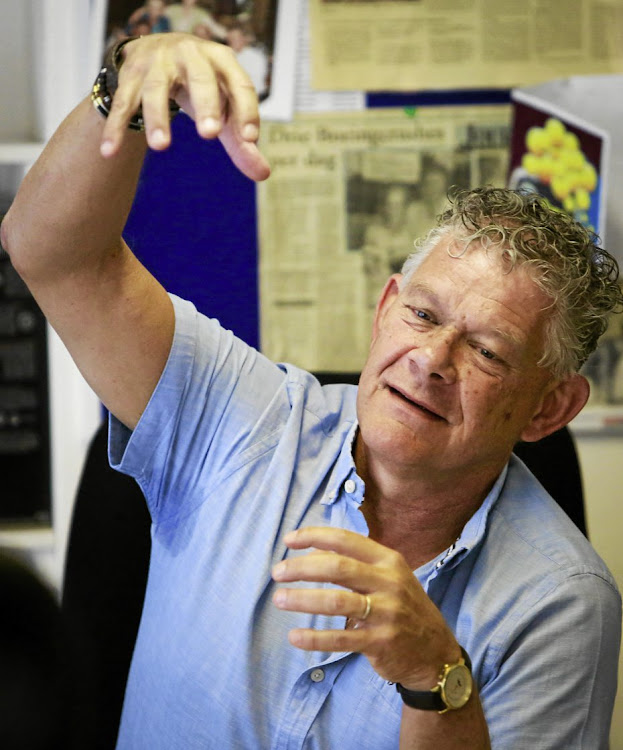 Tempelman says his skin is as thick as that of the animal the youth choir is named after, the elephant.
Image: Supplied

Vendors with oranges hanging from their green-tented shops line the main road from the hospital. Some 30 years ago, Tempelman would have taken this drive, at the end of which was the all-but-forgotten community of Moutse.

“In the valley, Moutse, where we are mainly active, there was no doctor, no medical infrastructure,” he says. “There was really nothing when I came there. And then that made me decide, because I knew the tribal chief and I knew a few of the political activists. I made a deal. I said, ‘If you give me a piece of ground, I will develop it.’ ”

The offer was accepted and Tempelman mortgaged his own house to buy 60,000 bricks and build a clinic. His only aim was to improve the standard of health care in the area. But it did not end there.

“From the clinic and trying to be a family doctor, providing proper care, I got introduced to all the other problems in the community,” he says. “And then you can do one of two things — either you walk away or you fully engage.”

Tempelman fully engaged to the extent that the clinic has since developed into the NCG,  which has five programmes in the community: health care,  child and youth development,  water and sanitation,  infrastructure support,  and research.

When Tempelman first arrived, in the turbulent 1990s, it was not uncommon for him to have to dodge gunshots.

“In that community in 1994, white and black was not so easy together,” he says.

“Normally you saw at the taxi ranks on the side of the townships, you have those taxi-rank doctors who give a green muthi, a blue injection, but not health care. And I wanted to do it proper.

“And I dare to go in the middle of the township, build a proper clinic, not a shabby place. I had my problems, they robbed me, I had guns on my head, they stole cars and all those things. But I never left because it’s a beautiful community.”

Today, children are pushing wheelbarrows full of buckets to fetch water from boreholes Tempelman helped install. But the name Ndlovu, of late, has been mainly associated with the singing sensation born out of the youth development programme he implemented.

Having a life-skills programme in place, Tempelman decided to have some of the children in the programme perform at the official opening of the Ndlovu Miracle Theatre in Elandsdoorn in 2008. He reached out to Ralf Schmitt, the Drakensberg Boys Choir conductor. 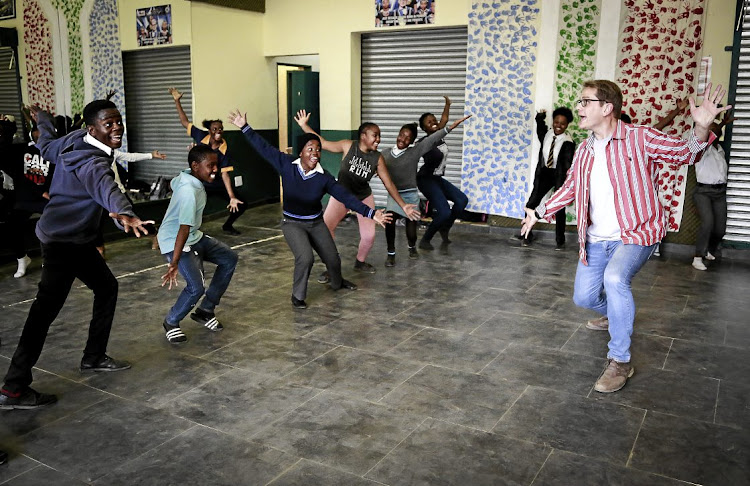 From that first public performance, intended to be a one-off, the Ndlovu Youth Choir grew, becoming a place of healing and sanctuary for orphaned and vulnerable children from the area. Officially formed in 2009, they are now an international sensation and Tempelman and the staff at the NCG have had to help manage the expectations of their sudden fame.

Tempelman likes to use a metaphor: “From walking with the sand of Moutse between their toes, they now walk in shoes on the red carpet in Hollywood. When they come back, we have a hell of a task and that is to get them from that very high place back to the fact that tomorrow, you get your wheelbarrow again, and you have to go 5km to fetch 20l  of water.

Mentally we have to guide those kids in the stardom, which shouldn’t go to your head. Because going up like this makes also that you can fall flat like this

“Mentally we have to guide those kids in the stardom, which shouldn’t go to your head. Because going up like this makes also that you can fall flat like this. We are super, super proud and happy, but very anxious on how to guide it,” he says.

The 48 members of the choir are among 4,000 children to whom the NGO offers assistance  with the aim of growing healthy, responsible and employable South Africans.

The group is also planning to open a vocational school that will teach practical skills such as painting, plumbing and masonry.

Like all prominent philanthropists, Tempelman is not without his detractors. Some whispered that the umlungu was using the kids to make money for himself. Tempelman has heard  the rumours,  and dismisses them.

He points out that the group was named Ndlovu — elephant — because the name represents strength and power.

“Do you know why we are an elephant? Because elephants have a thick skin. When you have success like this, there are many people jealous that they haven’t done it and I don’t care what they say. Because I know how we do it. I’m proud to say I’ve got a 25-year track record of working in that community and I’ve never stabbed anybody in the back.

“So if I want to continue, and I have a huge responsibility of 135 people employed and 4,000-plus people in our care, plus that massive research centre we are setting up, I’m not going to waste 25 years of hard work. If people want to accuse me of this then they are without the facts.”

The elephant in  the Ndlovu Group logo is not just a symbol of Tempelman’s thick skin but a reminder of his student days in The Netherlands, where he was part of a student club called Dispuut Olifant (dispute elephant) that played a vital role in his transition to adulthood. When the time came to choose a name for the clinic, he wanted to honour both the people of SA and his heritage.

He has also been given a Zulu name by the people of Moutse. They call him Hlanganani, which means “he who brings people together”. For Tempelman, this is a great honour because he believes that’s what he has been trying to do for almost 30 years.

“I get so much back from the community,” he says. “I feel a sense of responsibility. I feel like I don’t have a job, I have a hobby which takes up 160% of my time. I’m part of the community. They accepted me as a part of the community. I’m invited from the birth of a child to the funerals, to the celebration of any event. We are always there for each other, and that is a special position.”

The Ndlovu Youth Choir flew the SA flag high on America's Got Talent. Here's why we loved them
News
2 years ago

Before we leave his office, which is filled with medical books and journals, he draws our attention to a brown, scroll-like poster on his wall. Written on it is  a phrase he says he lives by, which exists in some form in about 50 different languages, ideologies and religions. It says:  “Shit happens.”

Until this week, Tempelman was concerned about the potential problems that could arise if the choir won America’s Got Talent. The singers would have to remain under contract in the US, and expectations of a financial windfall would balloon dramatically in the village.

Now that they are on their way home, having received a standing ovation in the final round with their version of Toto’s Africa, but ultimately not first place, some of these fears have been put to rest.

In our conversation before the outcome was known, he said: “Either way they cannot lose, because we have gained so much. My aim is to celebrate that.”

The South African flag flew high and the crowd was euphoric as the Ndlovu Youth Choir arrived at Johannesburg's OR Tambo International Airport on ...
TshisaLIVE
2 years ago

Ndlovu Youth Choir didn't win 'America's Got Talent', but they won our hearts

Moutse: the dusty village that raised the Ndlovu Youth Choir

The Zulu phrase, which means I am happy, echoes beyond the walls of Sarah Nhlapho’s home in Moutse village in Limpopo. She is one of the five “Gutsy ...
News
2 years ago