Thanks to its TV timewarp, SA has somewhat compressed but very fond memories of actor William Shatner. We caught up with him at the recent Comic Con Africa in Joburg 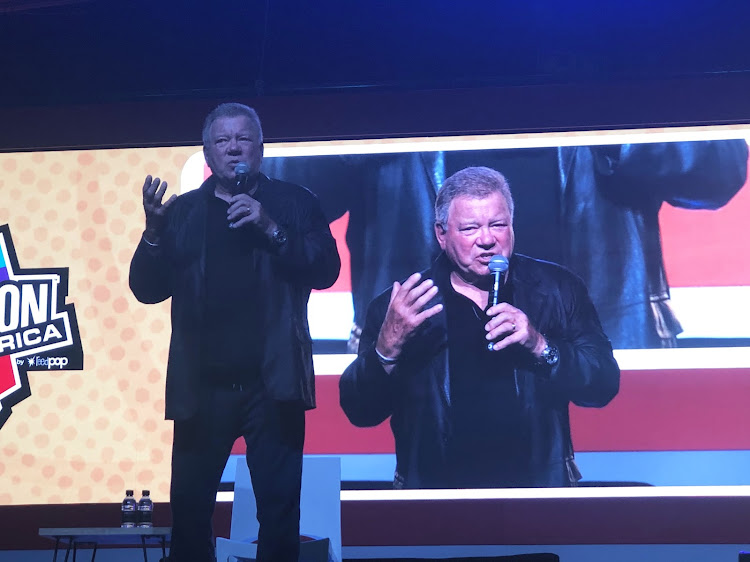 When Captain James T Kirk strides into the room, there is no whooshing sound from the doors, nor a red-shirted crewman handing him a data pad.

Instead, William Shatner has quietly arrived for this interview from his Gallagher Estate hotel room sans entourage. Even his US agent is nowhere to be seen.

He has only had a single night’s rest since flying from the US to appear at the second annual Comic Con Africa in Midrand. On day one, he was already on stage sharing stories and memories, answering questions with razor-sharp wit and striding to and fro, very much unlike an 88-year-old star who had just spent long hours on a transatlantic flight.

Yet he now admits: “I was blind with fatigue. I hadn’t slept in two days. It’s going to be a real adventure to see if I can stay awake.”

Fatigue or not, after one fan’s tongue-in-cheek question, “Whatever happened to the kid who got stuck in the escalator in Rescue 911? Was he OK?”, Shatner fired right back: “No, he died, he was ground up! Too bad [you didn’t see it], you would have loved it!”

For many at Comic Con Africa, Shatner will always be the dashing commander of the USS Enterprise whose space-faring adventures only warped into SA at the start of the Eighties, after the advent of TV locally in 1976. Star Trek had debuted in the US in 1966, though its popularity only truly grew through broadcast syndication in the Seventies.

In SA, the Eighties were the decade of Shatner. Soon after Star Trek aired here, he was back as the tough titular cop in TJ Hooker.

“And you thought, how rapidly that man has aged!” he laughs when told about SA being so late to the TV party. 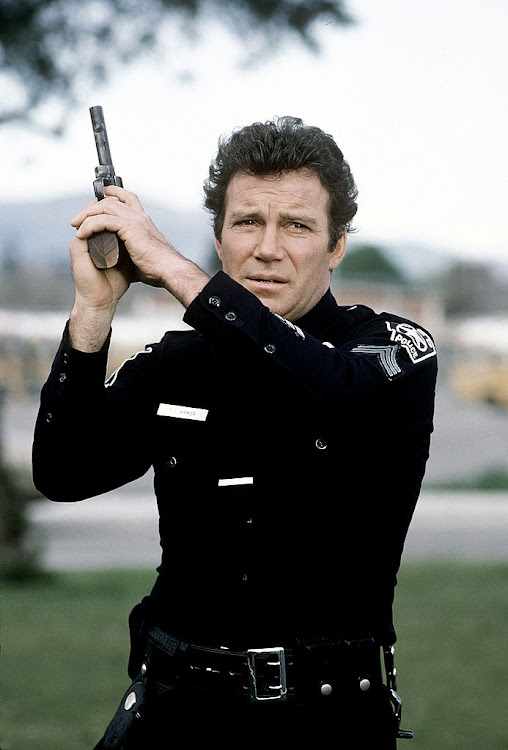 William Shatner as the title character in an episoder of 'TJ Hooker' in 1982.
Image: Archives/Walt Disney Television via Getty Images

Next he hosted Rescue 911 – early reality TV so popular here that it spawned urban legends about South Africans in need dialling 911 instead of 10111. And in the 2000s, he won over a whole new generation as Denny Crane in Boston Legal.

He breeds horses and is an ardent environmentalist – “I used to hunt with a bow and arrow many years ago and I just stopped when I realised what I was doing” – and charity supporter.

Then there are his spoken-word albums and, last year, he had his first go at country music, followed by, improbably, a Christmas album recorded with rock royalty including Iggy Pop, Henry Rollins and Todd Rundgren.

So is he a US national treasure like Betty White?

A Canadian bystander adopted as one of America’s favourite sons, to be sure. So, looking all the way back to his first theatre role in 1954, which would he pick as the real decade of Shatner?

“This one! I’ve got a new show on the air in the US and they’ve ordered more, so it will last more than one season. It’s called The UnXplained and eventually it will come to SA. It seems to be another show the American public has embraced – so another decade with another show.”

While his new TV show is a true-life X-Files probing the world’s mysteries, his music is taking a more personal turn, with a blues album in the works.

“This album is an intriguing proposition – to discover what the blues are, how to do it, how you indigenously sing the blues … I know about pain, I know about sorrow, but how do you express it from a cultural point of view? It’s really an interesting problem to work out.”

His Yuletide album, Shatner Claus, contained “narrative songs” described by The Los Angeles Times as a “delightfully dramatic outing”, though The New York Times simply said: “Could we not? Signed, the Grinch.”

At this stage of his career, does he even care about the critics any more or is he just pursuing whatever project strikes his fancy?

“Well, sure, I care that people like it,” he says. “I think it was really a terrific album! I had an album going last year at the same time, the country music album, and they asked me to sing at the Grand Ole Opry [in Nashville], so I was on the magic stage of the Grand Ole Opry and at the same time had the Christmas album that did very well in the US and should come back next year … Could we?”

Speaking at Comic Con, an inevitable question from the audience was about the late Leonard Nimoy – famous for playing the Vulcan Spock in Star Trek, and a close friend of Shatner’s.

He told the audience how Nimoy had evolved the role of Spock after an initial pilot episode that was quite different from the later series. “Leonard had grasped the role and now, uniquely, it defined him … there had been nothing like it before and nothing after.” 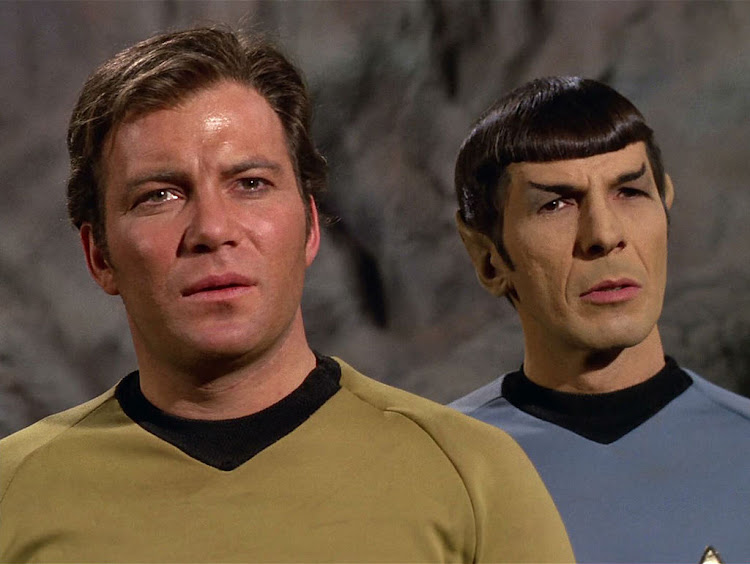 But what about Shatner himself? Is there a little bit of Captain Kirk still with him after all these years?

“I don’t think, at least in my case, that characters rub off on you,” he says. “You don’t start assuming the character; the character really assumes you. But the fact of the matter is, the actor brings himself.

“Even when he wears a long nose and a beard, it’s still the actor. Laurence Olivier, for all his disguises, was still Laurence Olivier, who thought that’s the way somebody would perform or read a line, whereas another actor in the same costume would read the line a different way.

You know how you give a monkey a little tidbit to do a trick? That’s how I feel!

And, as he said to the fans about Kirk’s controversial demise in a later Star Trek film that divided fans: “He didn’t die like the hero of the galaxy. He died shot in the back. That’s no way for a hero to go. I wanted to die with trumpets and timpani!”

Just don’t ask him to bring out a little bit of Kirk or even Denny Crane, as one fan did this week. “You know how you give a monkey a little tidbit to do a trick? That’s how I feel!”

He admits freely, however, that he has not seen any other Star Trek series on TV and only a few of the movies. So what does he watch?

“I’m a newsaholic. I love to follow the drama of news and what’s happening in the world, especially in the world around me – I mean in the immediate environment of, say, the US – but also I’m interested in what’s transpiring in this historical drama that goes on every day.

“What we forget – and the older I get, the more conscious I am of its reality – is that politicians and policymakers and people who guide our fates are human beings with the same tendencies and prejudices and importance and brightness and intelligence – and stupidity – that the rest of us have.

“So it really isn’t difficult, if you follow the news, to follow the logical progress that people are making. Something happens and then there is an action and a reaction to it – it starts to write itself like a historical drama.”

He adds: “I read a lot of historical dramas and I watch a lot of news and sports and movies, but what I don’t watch is a lot of television. My understanding is television is better than ever – and I haven’t seen those shows. I don’t know many of these actors. I meet a lot of actors here at these Comic Cons and I have to be told who they are.”

Comic Con Africa is arguably the only place where you can see a couple dressed as Game of Thrones' Daenerys and Drogo and watch Peter Parker from ...
Lifestyle
2 years ago

His lack of interest in modern-day TV drama contrasts sharply with his passion for horses – evident when he reveals what he would like to do on his 100th birthday.

“I ride a lot of horses. I ride competitively. Just last week I was in Las Vegas riding five horses as a reiner [guiding horses through a series of precise movements]. It’s a very athletic thing, and I like to think that I can still do that, and that on my 100th birthday I’ll be in a horse competition.

“I’d like to do that on my 100th birthday and embrace all my children and grandchildren.”

Back from relative obscurity and rumoured disgrace, the star of hit Netflix series talks to Margaret Gardiner about her return to the spotlight
Lifestyle
2 years ago