The former beauty queen has suffered several knocks, including seven miscarriages and accusations of a sex tape. So writing a memoir has been like going to therapy, she tells Leonie Wagner 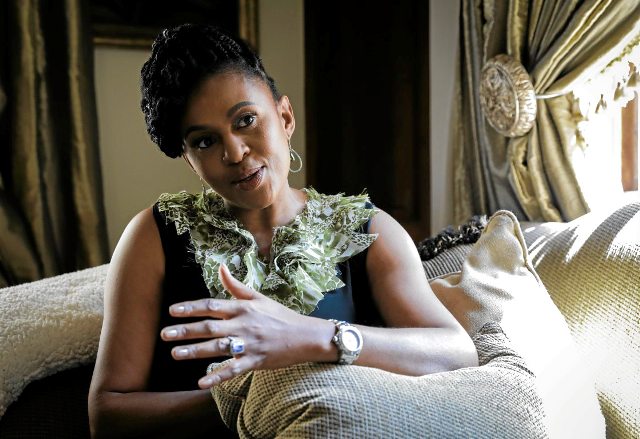 The plush breakfast area in the corner of Basetsana 'Bassie' Kumalo’s kitchen has been converted into a makeup station. A makeup artist is putting the final touches to her face. Nude lipstick is the order of the day.

Kumalo leads me to her “cocoon”, a couch in the lounge that looks out at the manicured garden and wooden jungle gym, a feature she says she always dreamt of having.

The former beauty queen who seems, to her fans, to live a charmed life opens up about the series of tragedies in her life.

In 2003 her father died. Three years later her mother passed away and a year after that Kumalo miscarried twins, one of seven miscarriages she has endured. She also started a business that failed and trended on social media for all the wrong reasons. She shares these stories and more in her memoir, Bassie: My Journey of Hope.

Bassie shares special childhood memories in an extract from her book

Bassie has really put her heart and soul into this book.
TshisaLIVE
2 years ago

This is a milestone year for Kumalo. She turned 45 in March and is celebrating 25 years in the television industry and 25 years since she was crowned Miss SA.

“I was always going to write a book, it was just a question of when. I’ve always journalled throughout my adult life and captured memories; I’m a firm proponent of writing down moments, experiences. I’ve always had a dictaphone so oftentimes I’d record myself so that I don’t forget,” she says.

Every table, wall and even the ledge above the fireplace is filled with photographs. There is a wall dedicated to her reign as Miss SA and another with pictures of her wedding day. Behind the grand piano in the entrance hall is a mahogany table filled with more pictures of her and husband Romeo, their wedding day, their children and pictures with Nelson Mandela. 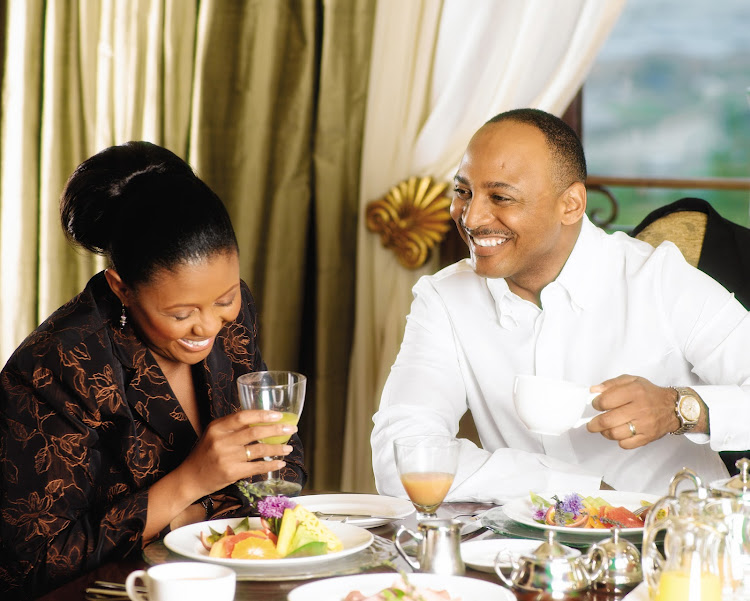 What the plethora of pictures with her signature smile won’t tell is contained in her memoir, in which she says she was at her most vulnerable, having “decided to leave nothing unsaid”.

Another prominent feature of the Kumalo home is books. The coffee table in the lounge has a stack at each corner. In one of these is The Book of Joy by the Dalai Lama and Archbishop Desmond Tutu, which she is currently reading.

Penning her own memoir was a profound experience for Kumalo.

“When I wrote about some of the chapters in my life, my keyboard got soaked and it would stop working because I would sit in my study at 3 o’clock in the morning and I’d just write. And I cried so much.

"This book has been cathartic to me; it almost feels like I’ve been to therapy.

“I found my healing in writing this book; I found my restoration in owning my truth and my pain,” she says.

“Having written this memoir I feel light. This burden that was sitting on me, it’s gone. It is well with my soul.”

When I wrote about some of the chapters in my life, my keyboard got soaked ... I cried so much

Basetsana Kumalo on penning her memoir

Her bus-driver father, Phillip Makgalemele, was never sick until he was felled by the stroke that put him in intensive care for two weeks in December 2002. When he died, in January 2003, Kumalo was gutted. She refused to eat or get out of bed. It felt like the wall she could always lean on had been yanked from her.

The death of her mother, Beatrice, a former teacher, was also sudden. She was recovering from a heart attack and doing well, recuperating in Cape Town. During the recuperation period Kumalo would travel to Cape Town on alternate weekends to be with her.

Her mother was asthmatic and one day, three weeks before she was due to return home to Johannesburg, she was admitted to hospital to be put on a nebuliser to open up her chest. Upon arriving at the hospital, her mother was given three injections. She suffered three more heart attacks and died. It happened on one of the weekends that Kumalo wasn’t in Cape Town, and she didn’t get there in time.

The family believes the injections by the medical intern perforated Beatrice’s heart.

A year later, in 2007, Kumalo was expecting twins but suffered a miscarriage.

“My husband was incredible; he just took care of my hurt and my failing heart and my pain. He literally was one person who just made me get out of bed again, take a shower, brush my hair, brush my teeth. Everything was an effort,” she says.

Kumalo was in such emotional pain that it was suggested she go on medication. She says that her faith and her husband saved her.

“I have never been in such a dark place in my entire existence as when I lost my babies. I thought I was going to die. It hurt so deeply that there was no point in doing anything, I’d thrown in the towel and my faith saved me,” she says.

One of her reasons for writing her memoirs is to show her three children what a gift they are.

This is also the first time she is sharing pictures of her children with the public. She and Romeo made the decision years ago that their children would not be thrust into the spotlight because they did not choose to be born to public figures.

They may have been able to hide their children from the world, but they could not hide the world from their children, especially their teenage son, Nathi.

In June last year, Bassie and Romeo had to have the hardest conversation with him at the breakfast table.

One Sunday, while getting her hair done, Kumalo received a number of encouraging text messages. She just thought “there’s a lot of love going around town today”, she says. It wasn’t until a friend called her and alerted her that she realised that she and Romeo were trending on Twitter.

Author Jackie Phamotse had tweeted that a “female TV mogul” was pleading with her not to share a video of her drunk and her husband engaging in gay sex.

“To have to sit my son down, he was 13 at the time, and say, ‘Nathi, we need to talk’ … We sat him at the kitchen table and his dad said, ‘My boy, there’s an ugly rumour and an untruth that is being peddled about me and Mommy and we want you to hear it from us, that first of all it’s a diabolical lie, it’s untrue and we’re going to deal with it.’

“It was very painful to have to sit and tell a 13-year-old child that there are lies about your parents having a sex video. After we talked to him and told him what was going around on social media, Nathi just said, ‘I know who’s raising me.’ I was blown away,” says Kumalo.

Author Jackie Phamotse has been charged with crimen injuria for comments she made last year about power couple Romeo and Basetsana Kumalo.
TshisaLIVE
3 years ago

She understands that being a public figure comes with its own set of challenges, she says, but the rules of engagement changed fundamentally when she became a mom. She and Romeo are suing Phamotse, who’s been charged with crimen injuria.

Kumalo has been making headlines for 25 years, but of all the untruths she’s had to read about herself, this was the worst.

She’s had to develop a thick skin over the years. The woman sitting next to me is very different to the 20-year-old who was crowned Miss SA in 1994.

In the beginning her palms would sweat and she’d be a nervous wreck but over the years she’s not only made peace with the butterflies but learnt how to “make the butterflies fly in unison”.

This didn’t begin in 1994 but in 1985 when she won her first pageant, Miss Helio, sponsored by a shoe shop. Her mother got her and her sisters involved in pageants as a way to keep them busy and get little Bassie to come out of her shell. She says she was never really keen on pageants but she dared not defy her mom’s orders.

In 1990 she won Miss Soweto at the age of 16. Her plan was to finish school and enrol in university. She was admitted to study for a BA in education at the University of Venda and was all set to become a teacher.

But her plans were derailed when she won Miss SA, a moment that changed the trajectory of her life.

“I always honour and respect that 20-year-old girl that was on stage in 1994, simply because she gave this woman who sits here at 45 the greatest opportunities. I have such huge respect for the platform, for the crown and even for the era that I’d won.

To be the ambassador of a new nation, to travel with Madiba, introducing him before he’d take to the stage as a keynote speaker, to see the world, what a great privilege that Miss South Africa afforded me,” she says. 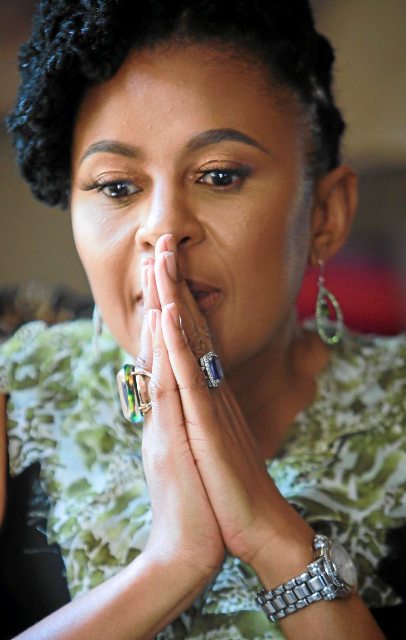 'Being a public figure is not for the faint-hearted, especially in the times that we live in, says Bassie Khumalo.
Image: Sebabatso Mosamo

Her greatest privilege was the time she spent with Mandela, who became a second father to her. She recalls having to introduce Romeo to Tata, who insisted on giving his blessing before the couple got married.

“Tata said, ‘There’s a picture of you with your dad, you are sitting on his lap.’

"It was when I’d won Miss SA, I was holding a rose, sitting on his lap, and it was on the front page of the Sunday Times and Tata remembered that picture. He remembered things in extraordinary detail. He said, ‘Come, you sit here darling,’ and he said, ‘It’s going to be fine, from this day I’ll be there as your father. When you need anything, you know where to find me.’ ”

As we sip water infused with mint and lemon, she describes how her time with Mandela “literally defined the woman I have become”.

“Being a public figure is not for the faint-hearted, especially in the times that we live in. It’s also about what your life purpose is. My life purpose, I’m very clear, I’m a teacher.

“I was going to be a teacher in a conventional classroom with chalk in hand. I always say that God has an incredible sense of humour, He gave me a bigger classroom,” she laughs.

Win a signed copy of the book and Lux products valued at R1,000
Books
2 years ago

Basetsana Kumalo launches autobiography and here's what went down

'I can’t think of black excellence without thinking of you, Basetsana Kumalo'
TshisaLIVE
2 years ago